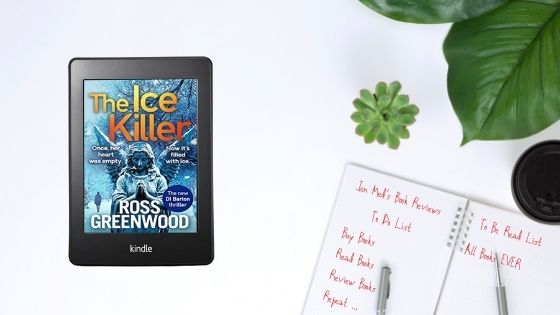 Today I’m pleased to be able to share my thoughts on The ice Killer by Ross Greenwood, the final book in his Peterborough set DI Barton series. Ive really enjoyed getting to know Barton and his team, so a big thank you to publishers Boldwood books for providing an advance copy for review and to Rachel Gilbey of RaRa Resources for inviting me to join the tour. Here’s what the book is all about:

Once, her heart was empty. Now it’s filled with ice…

Ellen’s therapist told her to forget the past, but the life she’s left with is boring. All she wants is to be happy and normal, but the approaching long bleak nights of winter loom threateningly in front of her, especially as she’ll be alone.

When the secrets her mother put in place to protect her are uncovered, Ellen learns the frightening truth. Her history is darker than she imagined. She’s not who she thinks she is, and the real her is a very different person to the one that others have mistreated and exploited.

If she has any hope for a future, Ellen must find answers about the past. This winter, there will be vengeance on Ellen’s mind, and DI Barton will struggle in his hardest case to date.

How can he find the truth when all the victims and witnesses are dead?

The final book in the series and perhaps the one that leaves you with the most conflicted of emotions. Like all of the books, the killer in this tale has their own reasons for acting in the way that they do, a way of justifying the carnage that they leave in their wake. However, this is a far from simple case and whilst I can have sympathy for them in terms of their situation, maybe a touch of sadness in they way they have been let down, it is questionable that there is ever really just cause for what ultimately comes to pass. This book really does force us to look at whether or not a person is truly born bad or whether their decline is driven by circumstance. And believe me, what our killer goes through in this book would push anyone to their limit. The tension is high, so is the body count and with Barton temporarily stepping into the DCI’s shoes, this could turn out to be his toughest case yet.

I have really loved the way in which Ross Greenwood blends the action in these stories between following the police investigation and spending quality time with the perpetrator of the crime. We don’t always know the who of the situation, their identity being a very closely guarded secret that readers are challenged to try and uncover ahead of our dedicated team of Detectives. This time around, we know the who, we even know some of the why, but what we don’t know are the full ins and outs of the Killer’s story, and the more we uncover, the more sympathy I felt towards them. It really was an unusual experience. I could never condone their actions, but I understand why at least some of them occurred, driven by fear and instinctual reaction rather than design. Mostly ….

The Police team, headed by Barton are a great bunch, and with Barton temporarily promoted it falls to his Sergeants, Zander and Strange, to pick up some of the slack in terms of the investigation and the DI role. Both embrace and yet are overwhelmed by, the responsibility, and it is nice watching Barton mentor the two, allowing them to lead their own way to the right answers, particularly as Strange tries to help a junior member of the team who appears to be struggling. You can feel the camaraderie and the sense of team and it makes you want to keep on reading.

On the other side of the investigation we are faced with a rich array of characters, from the nice, to the creepy to the just down right nasty, some of whom appear to get their just desserts. Ellen and her best friend Scarlett are two very fleshed out and contrasting characters, but you would be forgiven for wondering just what they get from each others friendship. The way this is built into and explored in the story is very skillfull, adding a kind of strange tension and a definite twist to the tale.

Much like the first book in the series, I struggled to feel much sympathy for victims and yet Ross Greenwood has succeeded in making me need to see if justice will be done. DId I think I’d be disappointed if the answer was no? Well … yes and no to be fair. I think it is one of those books where, like Barton, I’d have been satisfied to see a kind of justice done, even if it wasn’t quite what you would ordinarily expect as a resolution. Compared to some of the action that come before it, the ending was almost serene, but definitely tinged with emotion and I was left wondering what could have been if things had been just a little different in our antagonist’s past. I’m just sad this is the last book. A fitting way to say goodbye, but I am going to miss this team.

Ross Greenwood is the author of six crime thrillers. Before becoming a full-time writer he was most recently a prison officer and so worked everyday with murderers, rapists and thieves for four years. He lives in Peterborough and his first title for Boldwood – the beginning of a series – is The Snow Killer to be published in November 2019.