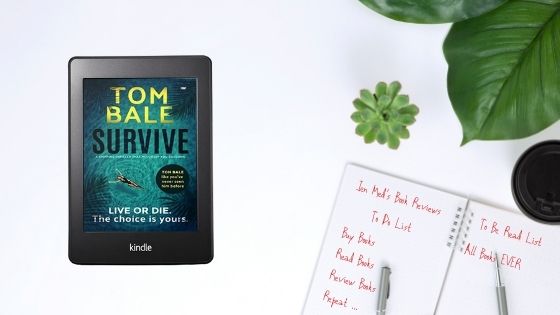 Today I am playing a little bit of review catch up and sharing my thoughts on Survive, the latest tense thriller from Tom Bale. I’ve been a fan of Mr B’s writing for a while now and love the way in which he excels at making a perfectly normal and everyday family or situation, in this case both, flipping it on it’s head and making it some kind of living nightmare. Right now, after reading this, I’m kind of glad that package tours are currently more or less on hold as this is one holiday that would be very, very hard to forget. I half read, half listened to the audio version of this book, but I was kept 100% entertained throughout. Here’s what it’s all about:

Paradise is about to become hell…

On a remote island in the Adriatic, an enigmatic billionaire hosts a twisted form of entertainment to satisfy the jaded appetites of his exclusive guests. And for one unsuspecting family, the holiday of a lifetime is about to become a desperate battle for survival.

As young parents, Sam and Jody have managed to defy the odds once before. But years of struggle have taken their toll, and Sam’s demons return to haunt him at the worst possible time.

Caught up in a sick game of cat and mouse, can they put their differences aside and work under intolerable pressure to save themselves and their children?

Live or die. It’s the only choice they have.

Talk about your holiday from hell!. Imagine the scene. You have been saving all year for that one moment of luxury, the all inclusive holiday that is the one thing you need to get away from everyday life and help you cope with all the stresses and pressure you have been under. That is what Sam and Jody believe is the case when they take their children Dylan and Grace away to what looks like, at least in their eyes, the picture perfect holiday. If only they’d listened to the warning from Jody’s father before they left home they might not only have been spared the experience of the terrible turbulence and the fellow passenger bores from hell, but also what turns out to be some of the worst nights of their young lives.

It’s really hard to say too much about the book without giving away some of the key plot points of the story. What I can say is that Tom Bale has taken a perfectly ordinary family, young maybe, perhaps lacking in the world experience of their fellow passengers, and thrown them into a real battle for their lives against an unknown force or forces. It is very hard to know who to trust but it is clear, from the start, that something is very off about their holiday, if truth be told from the very moment they check into the hotel. The first part of the story is given over to exploring Sam and Jody’s background and lulling them, and us as readers, into a false sense of security. Maybe this will just be the perfect holiday after all. And it is. Right up until the moment they win a trip to the resorts most luxurious hotel. From that point on things take a decidedly ominous and sinister turn.

I really found myself liking Sam and Jody very quickly and the author has created a really fun family dynamic here. Although clearly fish out of water, you cannot help but root for them all from the off and I especially loved the way in which he played around with the children’s behaviour, watching older sister Grace get what she wanted by a little bit of trickery with her little brother, but ultimately still showing how much she cared for him. The whole thing really rang true, as did the tension between Sam and Jody for reasons readers will uncover as the story progresses. From the overly attentive Resort Rep to the season traveller know it alls who are nursing their own secrets, you really do feel a though you are at the heart of the story with people you have probably met yourselves on one holiday or another.

This kind of felt like a story that was half way between an episode of Survivor and a slightly more PG version of the movie Hostel, with other forces using the family’s distress to their own end. As to exactly who and why, you have to read the book to discover, but as they group are put in ever more precarious and potentially deadly situations, you can feel the tension, energy and nerves rising. This really is a story of survival , a battle of wills and intellectual strength as much as raw power, and seeing the lengths that Sam and Jody go to in order to protect their children is the thing that will keep you reading long into the night. After the slower start, they are on holiday after all, the pacing really pics up and with each page turn you wonder just what is going to be thrown at them all next. And just when you think they might finally be safe … Well, it wouldn’t be a Tom Bale story without that extra sting in the tale.

Another cracking read that fans of the author are sure to enjoy.

Tom Bale had a variety of jobs before realising his lifelong ambition to be a full-time writer. He is the author of eleven novels, including the best sellers SEE HOW THEY RUN, ALL FALL DOWN and SKIN AND BONES. His latest book is SURVIVE, described as ‘the ultimate summer thriller!’ A keen cyclist and swimmer, he lives by the sea in Brighton.

3 thoughts on “Survive by Tom Bale”