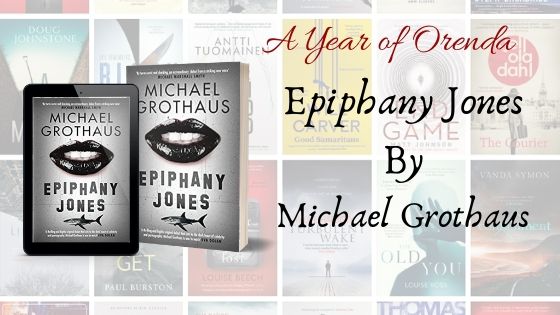 Today I am passing back to Mandie who has a review of the truly original, dark and brilliant Epiphany Jones by Michael Grothaus. I first picked up this book after hearing the author talk about it at Crimefest. It sounded quirky and ticked all the boxes of what I was looking for in terms of something a little different. I had no idea at that stage this was an Orenda title, or how much I was going to love the book. If you want to read my review, you can find it here. Read on for Mandie’s thoughts.

Jerry has a traumatic past that leaves him subject to psychotic hallucinations and depressive episodes. When he stands accused of stealing a priceless Van Gogh painting, he goes underground, where he develops an unwilling relationship with a woman who believes that the voices she hears are from God. Involuntarily entangled in the illicit world of sex-trafficking amongst the Hollywood elite, and on a mission to find redemption for a haunting series of events from the past, Jerry is thrust into a genuinely shocking and outrageously funny quest to uncover the truth and atone for historical sins.

A complex, page-turning psychological thriller, riddled with twists and turns, Epiphany Jones is also a superb dark comedy with a powerful emotional core. You’ll laugh when you know you shouldn’t, be moved when you least expect it and, most importantly, never look at Hollywood, celebrity or sex in the same way again. This is an extraordinary debut from a fresh, exceptional new talent.

I am not going to lie but I had not read any of the blurb on this book before I opened it, then again as its published by Orenda Books that is usually the case anyway, that being said when I read the opening of the book I did do a quick double take as I wondered just what I had started reading. But boy does it grab your attention.

Jerry Dresden is certainly one mixed up individual. He has issues with guilt from his childhood and some mental health issues that have him visiting a therapist and on medication to block the hallucinations that enter both his sleep and his waking hours. When a valuable painting is stolen from his place of work and a colleague is killed, Jerry finds himself in the frame for both acts he starts to believe that he may have done it when one of his hallucinations tells him that she has set him up. As it turns out this person is very much real, and she is determined that Jerry will help her in her quest in return for her helping prove his innocence.

Although the book is told primarily from the perspective of Jerry, the titular character of Epiphany Jones is still very much at the centre of the story. She is driven with such fierce determination that nothing and no one will stand in her way. As you read through the book you get to understand what drives her and what the connection is between her and Jerry and why she believes that she needs him to achieve her goal. And boy does she put Jerry through the ringer time and time again, making him believe he no option but to do what she tells him. She is damaged both mentally and physically yet there are moments where you do see some regret for what she is putting him through and ultimately it is these moments that keep him by her side to the end.

Epiphany Jones is quite a dark book that tackles subjects such as sex trafficking, rape, murder and just how power and greed can corrupt so easily, meaning that it may not be for everyone, especially in light of what has been in the media over the last few years but it does show that sometimes fiction is not as far off base as we would like to think. There are some moments of dark humour within that will quite possibly make you chuckle and there is one such scene in the book that I dare anyone reading it not to at least smile. I am not going to say what it is because trust me when you get to it you will know what I am on about. This book will stick with me for so many reasons and the fact that it was the authors debut novel makes me very excited to see what we will get next.

Michael Grothaus is a novelist and journalist who spent years researching sex trafficking, using his experiences as a springboard for his debut novel Epiphany Jones. Born in Saint Louis, Missouri in 1977, he spent his twenties in Chicago where he earned his degree in filmmaking and worked for institutions including The Art Institute of Chicago, Twentieth Century Fox, and Apple. As a journalist he regularly writes about creativity, tech, subcultures, sex and pornography, the effects of mass media on our psyches, and just plain mysterious stuff for publications including Fast Company, VICE, Guardian, Engadget, and more. He’s also done immersion journalism at geopolitical events including the Hong Kong protests against Beijing in 2014. His writing is read by millions of people each month. Michael lives in London.

Books by the author