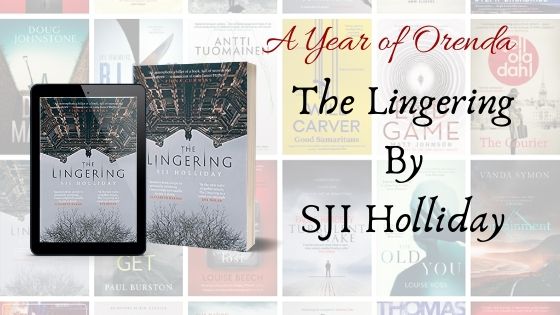 Today I pass the blog back to Mandie who is sharing her thoughts on the haunting gothic thriller, The Lingering by SJI Holliday as part of our Year of Orenda. I first reviewed this book way back in 2018, and if you want to know what I thought, you’d best check out my review which is right here. To find out if Mandie feels the same way about this chilling tale read on.

Married couple Jack and Ali Gardiner move to a self-sufficient commune in the English Fens, desperate for fresh start. The local village is known for the witches who once resided there and Rosalind House, where the commune has been established, is a former psychiatric home, with a disturbing history.

When Jack and Ali arrive, a chain of unexpected and unexplained events is set off, and it becomes clear that they are not all that they seem. As the residents become twitchy, and the villagers suspicious, events from the past come back to haunt them, and someone is seeking retribution…

At once an unnerving mystery, a chilling thriller and a dark and superbly wrought ghost story, The Lingering is an exceptionally plotted, terrifying and tantalisingly twisted novel by one of the most exciting authors in the genre.

I have been looking forward to reading The Lingering for quite a while now as I have found to my surprise that I love books that have a bit of a ghost story attached to them and this book has definitely got more than its fair share of spooky goings on.

Ali and Jack have decided to give up their old life and become residents of a commune in Rosalind House, a former asylum that has a very chequered history. Whist initially Jack seems to embrace this new life, Ali seems to be struggling with it, even though it was her idea to go in the first place. They do seem to have a bit of a rocky start with one incident that would set most people on edge and possibly even running back to the life they had initially turned their backs on

All of the residents have their own reasons for being at the commune, and it is mainly Angela that we get to know as she tries to unearth more of the past of the commune and its former residents. Sensing that Ali has experienced more that she is letting on, she tries to get close to her and is hurt when she is shut out.

Alongside the unexplained events there is also a much darker story that will have readers hooked as you try to work out what the newest residents are hiding and the eventual answer may not be quite what you expected. The parts of the book I really loved belonged to the journal of a doctor who was at Rosalind House when it was an asylum and it goes some way to explain some of the more spooky events within the story. I was a bit wary of the commune leader Smeaton to start with, but he did seem to genuinely want to run a place where people could go to live in harmony away from modern technology. Although there are quite a few different characters in the book it is told predominantly from the viewpoint of just three of them making it quite easy to follow.

This is certainly a very atmospheric book that builds slowly but keeps the reader interested, blending the past with the present and the spooky/thriller with ease. Whilst I knew that things would probably not end well for certain people the ending itself was not quite what I expected. If you are a fan of thrillers with a hint of the ghostly world then I totally recommend you pick up a copy of The Lingering and get stuck in.

S.J.I. (Susi) Holliday is a scientist, writing coach and the bestselling author of five crime novels, including the Banktoun Trilogy (Black Wood, Willow Walk and The Damselfly), the festive chiller The Deaths of December and her creepy Gothic psychological thriller The Lingering. Her short story ‘Home From Home’ was published in Alfred Hitchcock Mystery Magazine and shortlisted for the CWA Margery Allingham Prize. Encapsulating her love of travel and claustrophobic settings, her latest novel, Violet, explores toxic friendships and the perils of talking to strangers, as well as drawing on her own journey on the Trans-Siberian Express over 10 years ago. All of her novels have been UK ebook number-one bestsellers. Susi was born and raised in Scotland and now divides her time between Edinburgh, London and as many other exciting places that she can fit in.

Books by the author