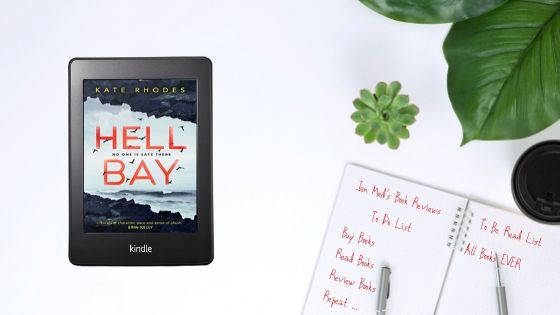 Another day another audiobook catch up. This time it is Hell Bay, book one in the Ben Kitto series by Kate Rhodes. I have wanted to read this for so long and, full disclosure here, I am in it, albeit fleetingly but there you go. My appearance as a character with far more intelligence and poise than I will ever muster has in no way influenced my review of the book, but just in case you have or do read it and wonder – yes that is/isn’t me. It was for charity! Here’s what the book is all about:

DI Ben Kitto needs a second chance. After ten years working for the murder squad in London, a traumatic event has left him grief-stricken. He’s tried to resign from his job, but his boss has persuaded him to take three months to reconsider.

Ben plans to work in his uncle’s boatyard on the tiny Scilly island of Bryher where he was born, hoping to mend his shattered nerves. His plans go awry when the body of a sixteen-year-old girl is found on the beach at Hell Bay. Her attacker must still be on the island because no ferries have sailed during the two-day storm.

Everyone on the island is under suspicion. Dark secrets are about to resurface. And the murderer could strike again at any time . . .

Well hello Ben Kitto. This is a Detective who certainly makes an impression, although I have to admit that is partly because of his dog Shadow, as much of him. I’m a sucker for a wayward dog. From the minute we meet Ben, you know that he is a tortured soul, and that he is back in his childhood home as a form of escape and, let’s face it, there is no better an escape from the demands of a high profile job in the city than a small fishing island off the south coast of Cornwall. Well … ordinarily, anyway. Doesn’t quite work out that way for our hero in Hell Bay because it wouldn’t be much of a thriller if life was all just fishing nets and crab sandwiches now would it?

The opening to the book really sets the scene and fills the reader with the sense of isolation that envelopes the island on the dark, cold nights. We are there, with our soon to be victim, Laura Trescothick, present as she meets her fate, but the who and the why of the whole matter escapes us. That is what, ultimately, Ben sets out to discover, bringing him right back into the heart of the community he once tried hard to leave behind. And what a community it is. Kate Rhodes really does create that small town feeling with the way in which all of the islanders know each other, the honour system that still exists in the small shops and familiar feeling that welcomes Ben as he visits old friends and is drawn back into the community. It is authentic and yet so completely alien when you compare it to the lives most of us live, the life Ben would have lived in London – doors locked, people living in silos. baely knowing the name of their neighbour.

The crime that happens on Bryher shocks the island, the seemingly peaceful harmony shattered by this awful happening. And yet, as Ben digs deeper into life on the island it soon becomes clear that perhaps people don’t know each other as well as they thought they did, and that there are many skeletons hidden in the dusty old closets of the town. Rumours and scandals are to be uncovered and no-one falls beyond suspicion, even Ben’s own Uncle finding doubt cast over his innocence. And understandably so. As you learn more about ‘island life’, about the devious and underhand behaviour of some of the residents and of the less than lawful undertakings of some others, it is very hard to pinpoint who might have wanted to hurt a sixteen year old girl, and even her parents behaviour had me wondering just what it was that they were hiding.

Characters and setting are two things which really make this book stand out for me. You can tell that the author has a real love for the Islands from the way in which she has captured their beauty, and their atmosphere on the page. They became a place that I wanted to visit straight away, drawn to the idea of the dramatic landscape that I could picture so vividly, but also somewhere that I knew could be so crushingly isolating and remote if caught in the heart of a storm that it instills a sense of trepidation too. The characters are so multidimensional, so authentic, that I wanted to get to know more about them, even those who are perhaps less conventional than their neighbours. That sense of the big-bucks moguls trying to oust the long term residents from their homes, that victimisation and bullying, rang all too true and made the blood boil. But it is Ben Kitto who really stands out, a man both at home in and, slightly, at odds with the islands. He may have been running from his career, his past, but it is in his blood and he can’t stay away for long. As we unravel more about what has driven him to seek solace on the islands, I became more in tune with him and even happier to be in his company.

A rich and atmospheric thriller that had me glued to the story from start to finish. I listened to the audiobook and I have to give a shout out to narrator, Stephen Perring, who did an amazing job and whose voice I could still hear in my head as I read book four a couple of weeks ago. If you like your stories with an edge of mystery then I can highly recommend this one. I’m only sorry it took me so long to listen to it.

Kate Rhodes is a crime novelist and award winning poet. Kate was born in south London, but now lives in Cambridge with her family. She studied English at university, and did a wide range of jobs including working in bars, being a theatre usherette, and teaching at a liberal arts college in Florida, before focusing on her writing.

Her latest crime novels are the acclaimed HELL BAY series set in the Isles of Scilly. Kate has been passionate about the islands since holidaying there as a child, and still returns for regular visits. Books in the series include HELL BAY, RUIN BEACH, and BURNT ISLAND.