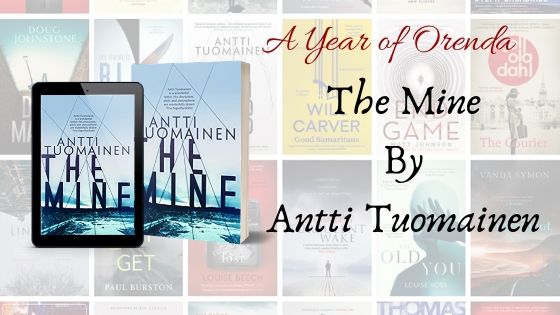 Today it is the first day of our Antti Tuomainen (mini) week on Jen Med’s where, as part of our Year of Orenda, we are going to be taking a look back at the wonderful writing of the man who gave me my 2017 book of the year. Mandie is going to be sharing her thoughts on The Mine, the author’s first book with Orenda, and if you want to know what I thought about it you can find my review here. All kinds of chilling, and not just because of the climate. Here’s what the book is all about:

A hitman. A journalist. A shattered family. A mine spewing toxic secrets that threaten to poison them all…

In the dead of winter, investigative reporter Janne Vuori sets out to uncover the truth about a mining company, whose illegal activities have created an environmental disaster in a small town in Northern Finland.

When the company’s executives begin to die in a string of mysterious accidents, and Janne’s personal life starts to unravel, past meets present in a catastrophic series of events that could cost him his life.

A traumatic story of family, a study in corruption, and a shocking reminder that secrets from the past can return to haunt us, with deadly results, The Mine is a gripping, beautifully written, terrifying and explosive thriller by the King of Helsinki Noir.

Having only previously read The Man Who Died by Antti Tuomainen, The Mine was certainly very different. This book has a more serious feel to it and although it does not have the same dark humour there are times when reading it, I could still see flashes of it that made me smile.

Janne Vuori is an investigative journalist and workaholic who after receiving an anonymous email sets off to the remote town of Suomalahti to dig into just how the nickel mine there operates. At first, he is unable to find anything but the longer he hangs around and starts looking into the work started by another journalist the more he manages to uncover. When his digging leads to threats to his family he considers passing up the story to someone else but eventually his need to get to the truth wins out, especially when members of the board of directors are being killed. Whilst dealing with all of this he also has to contend with the return of his father Emil into his life and he is not quite sure how to handle this at times.

You can’t help but like Janne’s dogged determination to get to the truth even when it does put those close to him in danger. You can feel his wife’s frustration that he always puts the job first but to a certain extent she understands why he has to do it. They seem to be permanently at odds with one another over careers and home life and you wonder if they are doing more harm than good staying together.

I was actually more fascinated with Janne’s father Emil. He is a man with secrets and regrets, the main one being the fact that he walked out of the lives of his wife and son. As to why that was you do get some idea as the story progresses and his return to the town he once lived is not just about reconnecting with his son. It would appear that they are more alike than either one would like to admit when it comes to what is important in life. Only time will tell if they both manage to work out what really matters most.

Antti Tuomainen manages to set the scene perfectly and his descriptions of the desolate Northern Finnish location add to the dark theme of greed and corruption, whilst also highlighting the potential pitfalls of mining that can do more harm to the environment than good.

Finnish Antti Tuomainen (b. 1971) was an award-winning copywriter when he made his literary debut in 2007 as a suspense author. The critically acclaimed My Brother’s Keeper was published two years later. In 2011 Tuomainen’s third novel, The Healer, was awarded the Clue Award for ‘Best Finnish Crime Novel of 2011’ and was shortlisted for the Glass Key Award. The Finnish press labelled The Healer, the story of a writer desperately searching for his missing wife in a post-apocalyptic Helsinki ‘unputdownable’. Two years later in 2013 they crowned Tuomainen ‘The King of Helsinki Noir’ when Dark as My Heart was published. With a piercing and evocative style, Tuomainen is one of the first to challenge the Scandinavian crime genre formula. The Man Who Died brought him to his literary best.