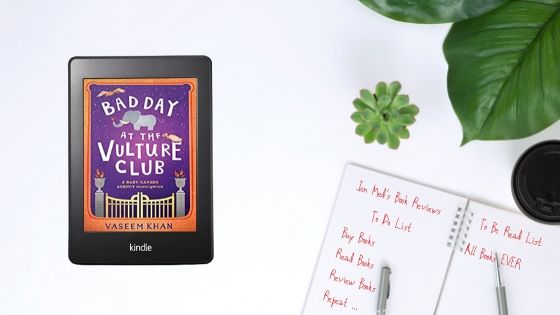 Today I am finally sharing my thoughts on Bad Day at The Vulture Club by Vaseem Khan, another of those books that has sat on the tbr shelf for far too long. I love the Inspector Chopra series so it was great to be back in the company of Chopra, Rangwalla and little (?) Ganesha once again as they try to solve a murder or two. Here’s what the book is all about.

In the gripping new Baby Ganesh Agency novel, Inspector Chopra and his elephant sidekick investigate the death of one of Mumbai’s wealthiest citizens, a murder with ramifications for its poorest.

The Parsees are among the oldest, most secretive and most influential communities in the city: respected, envied and sometimes feared.

When prominent industrialist Cyrus Zorabian is murdered on holy ground, his body dumped inside a Tower of Silence – where the Parsee dead are consumed by vultures – the police dismiss it as a random killing. But his daughter is unconvinced.

Chopra, uneasy at entering this world of power and privilege, is soon plagued by doubts about the case.

But murder is murder. And in Mumbai, wealth and corruption go in hand in hand, inextricably linking the lives of both high and low…

I do love this series. There is just something wonderful about the whole thing. From the brilliant characters that Vaseem Khan has created, to the way in which he paints such a vivid picture of the sights, sounds and culture of Mumbai, all wrapped up in a wonderfully twister murder mystery, or in this case two, really just pulls me into the story and keeps me amused to the very last page.

This time around we find India’s most unconventional crime fighting team investigating the murder of a very prominent Indian businessman, Cyrus Zorabian, whose body is dumped at one of his own buildings, the ‘Tower of Silence’, the very place the Parsee leave their dead. It seems that there are no end of possible suspects, from his personal assistant, to business rivals and wealthy Parsee peers, even to his own family including a son he disowned simply because he fell in love with the wrong woman. The more we get to know the victim, the easier it is to see why he may have been targeted, but not necessarily who may have actually done the dirty deed. Alongside this Chopra’s assistant, Rangwalla, is investigating a devastating building fire which led to the death of a young woman. Two very different cases, but ones which lead the pair back to their old colleagues and, in Chopra’s case, a nemesis, in their quest to find the truth.

I always find these books fascinating as whilst the cases that Chopra investigates are always exciting and full of mystery and adventure, I am constantly learning more about the rich and diverse history of India and its many different cultures. I had absolutely no idea about the Parsee culture before reading this book, or their belief that the bodies of the dead should be left for the many vultures of Mumbai to feast upon. I can understand why this is a frowned upon custom – it is hardly hygienic let’s face it – but I can also appreciate the very organic nature of the tradition and they way in which it feeds into the Parsee beliefs and religion. It was also interesting hearing about the decline of the Vultures and the was in which they are both feared and revered in the Indian culture. Personally I think they are strangely beautiful creatures and thinking of their not so natural decline as man takes over modern India made me a little sad. Don’t get me wrong, there is more to this story than meets the eye and as well as being an important commentary on modern environmental issues, it does link well into what happens in the rest of the book.

As always there is a good amount of action and threat in the book, Chopra’s life once more under threat as someone seeks to stop him and his investigation that sees Chopra uncovering dodgy dealings, personal vendettas, family feuds and links to the Mumbai underworld. Somebody wants Chopra dead, the who and why not clear, but it seems that not everyone wants to see the former Inspector succeed, and if it weren’t for some quick thinking on the part of lovely Ganesha, the book would have had a very different ending. No wonder Poppy is less than impressed with this latest investigation.

This is another beautifully crafted mystery, full of the usual blend of humour and serious investigations, with a thoroughly satisfying ending. Vaseem Khan has great skill in creating tension and excitement without leading readers too far towards the dark side. Cosy crime, with an unconventional elephant sidekick, that carries an important environmental and emotional message, I would definitely recommend this whole series as it is a joy.

Vaseem Khan first saw an elephant lumbering down the middle of the road in 1997 when he arrived in India to work as a management consultant. It was the most unusual thing he had ever encountered and served as the inspiration behind his series of crime novels. He returned to the UK in 2006 and now works at University College London for the Department of Security and Crime Science where he is astonished on a daily basis by the way modern science is being employed to tackle crime. Elephants are third on his list of passions, first and second being great literature and cricket, not always in that order.