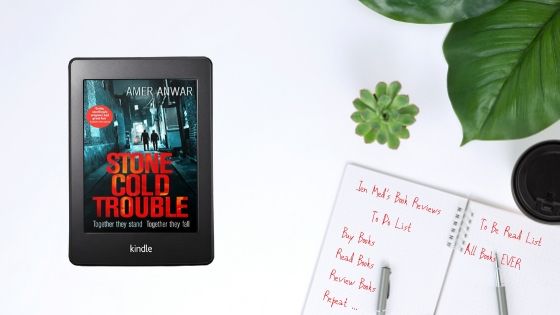 The one good thing about being so late in reading Brothers In Blood is that I didn’t have to wait to read the follow up, Stone Cold Trouble. I love the characters of Zaq and Jags created by Amer Anwar and couldn’t wait to see what they were caught up in this time around. My thanks to publisher Dialogue Books who provided the advance copy for review. Here’s what the book is all about:

Set in the heart of West London’s Asian community, this is the latest instalment in the unmissable ZAQ & JAGS series . . .

Trying – and failing – to keep his head down and to stay out of trouble, ex-con Zaq Khan agrees to help his best friend, Jags, recover a family heirloom, currently in the possession of a wealthy businessman. But when Zaq’s brother is viciously assaulted, Zaq is left wondering whether someone from his own past is out to get revenge.

Wanting answers and retribution, Zaq and Jags set out to track down those responsible. Meanwhile, their dealings with the businessman take a turn for the worse and Zaq and Jags find themselves suspected of murder.

It’ll take both brains and brawn to get themselves out of trouble and, no matter what happens, the results will likely be deadly. The only question is, whether it will prove deadly for them, or for someone else . . . ?

If you are looking for some action filled Asian noir, with a very authentic voice and a brilliant blend of character and story, you really should be getting yourself a copy of the Zaq and Jags series by Amer Anwar. Funny, sometimes chaotic, and ultimately very clever, these books will keep you entertained and right on the deg of your seat, if only to see how the heck this pair will get themself out of trouble this time. Even if they don’t go looking for it, trouble seems to find them, this time in the shape of Jags Uncle, Lucky, the least appropriately named character in the whole book. Okay, maybe second least. Not entirely sure I’d be handing my kids on of these kinds of Tonka’s to play with …

This time around we can safely say that this is 100% and Zaq and Jags story as half of the action in the book is driven by a favour the pair do for Jags’ Uncle, Lucky. He has made a wager he couldn’t really afford and it has cost him a necklace with great value to Lucky’s family, both sentimental and, it appears, monetary. With the necklace merely as bond, Lucky thought he was okay but when the man he made the bet with refuses to return the necklace, things turn dark and trying to get the necklace back could well also prove deadly. I loved the way in which Amer Anwar develops this plot, showing the arrogance of Shergill, the man holding the necklace, and the ruthless nature of him and his, how should I put this, associates, when it comes to keeping what they feel is rightfully now theirs. It leads to some real moments of threat and of intrigue, drawing Zaq and jags even further into the game and leaving them with few choices other than to play them at their own game.

The other part of the story links wholly back to Zaq as he tries to find the people who beat his brother so severely he is left in a coma. Whether this has something to do with Zaq’s past, or what happened in Western Fringes remains to be seen but it is clear that Zaq is going to need his wits, and his brawn, about him if he is going to get to the bottom of who was behind the attack. I love Zaq’s loyalty to his family and the way in which he pushes himself hard to find the truth, finding a kind of balance between retribution and maintaining his own freedom that really suits his character. The pair of them don’t always make what you might consider the right decision, the ending to the book fitting, but perhaps a little immoral, but it is what it is and I can’t help but like them regardless.

I really do love the way in which Amer Anwar manages to recreate that really authentic Asian voice. The banter between Zaq and Jags, and even between Zaq and his housemates is pitch perfect and you really do get that sense of a brotherhood, united by far more than blood. There is a real sense of menace that feeds through the book, helped ably by the fact that the aforementioned Tonka is a man of few words but undeniable presence and you can sense the deference to him from those around him. This is a guy with a reputation and, as we learn later in the book, not someone you ever want to cross. But the author keeps the darkest scenes off the page, even if the intent is abundantly clear. The book is not without its moments of jeopardy though, Zaq once again having to resort to physical defence as well as using his keen intelligence to best his opponents.

Another fun, action filled book, full of humour and brilliant characterisation that kept me glued to the page. Lord only knows what the pair might get up to next, but I have a feeling it’s going to be bedlam.

Amer Anwar grew up in West London. After leaving college he had a variety of jobs, including warehouse assistant, comic book lettering artist, a driver for emergency doctors and chalet rep in the French Alps. He eventually landed a job as a creative artworker/graphic designer and spent a decade and a half producing artwork, mainly for the home entertainment industry. He holds an MA in Creative Writing from Birkbeck, University of London and is a winner of the Crime Writers’ Association Debut Dagger Award.

One thought on “Stone Cold Trouble by Amer Anwar”

New book - a gift from me to me. I’m so nice to me. When I Was Ten by @fionacumminsauthor
New #bookpost courtesy of @wnbooks and @fmcmassociates - The Maidens by @alex.michaelides - out June 10th
More #bookpost today from @orendabooks - Black Reed Bay by Rod Reynolds. Out 13th May in ebook and 2nd September in paperback.
New #bookpost today from @orendabooks - No Honour, the upcoming novel from Awais Khan. Out 19th June In ebook ok and 19th August in paperback.
My order arrived from @orendabooks - #teamorenda mug, bookmark and tote bag. Love it. Available from the Orenda Books website along with all of their fabulous books.
A spot of retail therapy earlier at Waterstones in Shrewsbury. A new book bag and a copy of Hyde by @craigrussellauthor. Loved this book (and it’s not even out until 29th April sonIm thrilled to bag an early copy.)