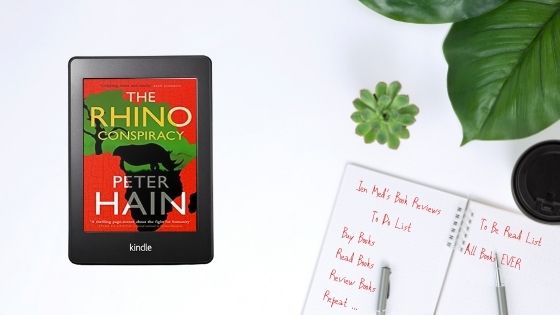 Yesterday was World Rhino day, a day to celebrate one of the most gentle and beautiful of the planet’s many animals that have been hunted to the point of near extinction. I’ve never had the good fortune to see a Rhino in the wild, but on a recent visit to Chester Zoo I stood and watched their wonderful group of Black Rhinos for a while. I was reading this book at the same time and the thought that these creatures, harmless as they are, were and still are being killed for what amounts to nothing more than greed, was heartbreaking. The fact that conservation programmes like theirs and that of Save The Rhino may be the only way future generations to get a chance to ever see these animals is, and rightly should be, a sobering thought. When I was asked if I’d like to be a part of the blog tour for The Rhino Conspiracy by Lord Peter Hain, I definitely wasn’t prepared for the emotional and thought provoking journey I was going to be taken on. Here is what the book is all about:

In the last decade over 6,000 rhinos have been killed in South Africa. Relentless poaching for their horns has led to a catastrophic fall in black rhino numbers. Meanwhile a corrupt South African government turns a blind eye to the international trade in rhino horn. This is the background to Peter Hain’s brilliantly pacey and timely thriller. Battling to defend the dwindling rhino population, a veteran freedom fighter is forced to break his lifetime loyalty to the ANC as he confronts corruption at the very highest level. The stakes are high. Can the country’s ancient rhino herd be saved from extinction by state-sponsored poaching? Has Mandela’s ‘rainbow nation’ been irretrievably betrayed by political corruption and cronyism?

I really wasn’t sure what to expect when picking up this book. A book about Rhino poaching? Government conspiracies? A story about conservation and the ultimate disaster that our planet is heading towards if we do not finally sit up and take note? Well … yes. It was al of those things but so much more. Although the characters in this book, many of whom are not formally named, may be fictionalised, the story behind the story, the corruption and greed of the post Apartheid and post Mandela South African Government, sadly were not. Based around real life people and Wildlife reservations, and with events very much based around an appalling truth, this is as much a lesson in history as it is a work of fiction, one that will hopefully make readers take note. It certainly opened my eyes to a part of history I was not fully aware of.

This is a story that is really in two parts but that are joined by a common thread – the corruption of the post Mandela South African Government. Firstly we have the story of the Zama Zama Game Reserve which has come under attack from poachers who are trying to murder their precious Rhinos in order to sell their tusks for profit. From the point of view of Ranger Isaac Mkhize we learn not only about the animals on the reserve, but also more about the local communities, about why Mkhize is so passionate about saving the herds and why other locals are driven to do the exact opposite. It is on one of the many safari’s that Mkize meets two of the other key characters in this novel – Piet van der Merwe and Thandi Matjeke. Thandi and Mkhize soon strike up a friendship that will change Mkhize’s life and outlook completely. Whilst he may have been passionate about conservation before, he knew little of the truth behind the politics, something to which his eyes, and that of the reader, are well and truly opened over the course of the novel.

The other side of the story is centred around a character called The Veteran, a former ANC chief activist who worked alongside Mandela to ensure a better and fairer future for Black South Africans and who has made it his mission to uproot the corrupt President and set South African politics, and especially his beloved ANC, back on the right path. He enlists the help of the spirited and passionate Thandi, a ‘Born Free’ South African who is determined to learn more about not just the politics of the past, but of the corruption of the present government, and through her Mkhize, although this is a relationship that proves to be mutually beneficial when their two worlds intersect in ways that Mkhize could not have imagined.

For me this book was as much a history lesson as it was a conservation based thriller. As I read it I found myself developing a far greater understanding of the political situation in South Africa, both during and post Apartheid. That isn’t to say that the book is overloaded with detail, but it gives you a strong flavour of the struggles that drove the freedom movement and they way in which greed proved that it is not an affliction suffered only by those of white skin. I think the balance between this and the plight of the Rhinos, the trade in their horns being the thing that continued to fuel the greed and power of The President, is kept just right, using the political turmoil and the tension of the scenes in which Thandi and The Veteran seek to expose the government to goo effect. These offset against the quiet tension on the game reserve, when poachers attempt to penetrate Zama Zama’s defences to get to their prize. The violence against the animals, when it comes, is kept off the page and I am thankful for that, but the impact of what is explained, of what the Poachers have done, is no less emotional and powerful for it.

The supporting characters, although largely unnamed, are of great importance to the plot. The Sniper, the Owner, iPhone Man – although you would find it hard to believe without having a name to attach to them a face to ascribe to them, they are still wholly fleshed out and well written. Thandi, The Veteran and Mkhize are three superb characters who I was engaged with from the off and Lord Hain has written them and the scenes between them perfectly, keeping the information flowing back and forth and using their sparse but vital interactions to drive the action and the urgency of the story forward. But then this is no mere story, the plight of the Rhinos, the greed of those behind their gradual destruction and the determination of those who fight to protect them and to change the corrupt political landscape all rooted in truth.

This is a keen political based thriller that exposes some of the worst of human nature. With a long but important set up, it gradually builds to a tense showdown that plays out in the only way the exposure of corruption really can. Using the global media and the Political stage as a conduit for change. But more than just a thriller, it is an important reminder of the kind of impact our greed and our lack of consideration for the planet, the constant need for expansion and for material things at the expense of the natural world, is having on our future and that of generations yet to come. It takes a hard person to read this book and not feel at least a small pang of guilt for that.

Peter Hain is a politician who as a teenager, newly moved to the UK from South Africa, was a leading activist in the Anti-Apartheid Movement. A documentary about the central role he played in the Stop the Tour campaign 1970 was released by BT Sport in December last year. He then went into politics becoming a cabinet minister for Labour under Tony Blair and Gordon Brown. Since standing down as an MP in 2015, he has sat in the House of Lords and still lives in his former constituency of Neath in Wales. He has written numerous works of non-fiction but this is his first thriller.

Learn more about Save The Rhino here.

One thought on “The Rhino Conspiracy by Peter Hain”