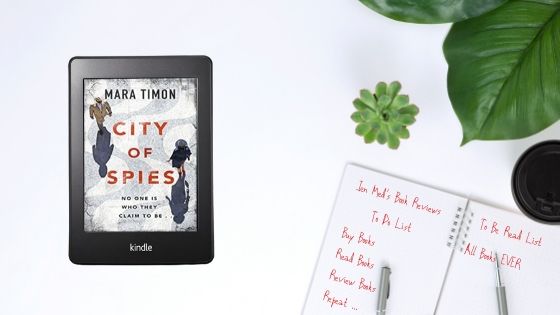 Today I’m passing the blog back over to Mandie who has a review of City of Spies as part of the blog tour. Thanks to Tracy Fenton of Compulsive Readers for inviting us to join the tour and to publisher Zaffre who provided a copy of the book for review. Here’s what it’s all about:

The stunning debut from the new name to watch in espionage thrillers. For fans of Charlotte Philby and The Bletchley Circle, this is perfect Sunday night drama.

LISBON, 1943: When her cover is blown, SOE agent Elisabeth de Mornay flees Paris. Pursued by the Gestapo, she makes her way to neutral Lisbon, where Europe’s elite rub shoulders with diplomats, businessmen, smugglers, and spies. There she receives new orders – and a new identity.

The closer Elisabeth comes to discovering the truth, the greater the risk grows. With a German officer watching her every step, it will take all of Elisabeth’s resourcefulness and determination to complete her mission.

But in a city where no one is who they claim to be, who can she trust?

After the death of her husband Elisabeth de Mornay joined the SOE determined to do something with her life. After her cover getting burned in France, she makes her escape to Portugal where she meets a man from her past and finds herself mixing with German soldiers in the hope to obtain information vital to the British war effort. Not knowing who she can trust, she always must be on her guard to ensure her safety. Things get decidedly more complicated when she gets close to one specific officer and the lines between truth and fiction become blurred.

It’s hard not to like this book and its main character Elisabeth. She is a strong and feisty female who is determined to live her life in the best way possible after her family disowned her when she married. She is certainly quick to think on her feet and is handy with whatever weapon she has to hand, and this is quite often what saves her life, time after time. Her intelligence enables her to adapt to circumstances as they quickly change, and I think it is this intelligence that draws German Officer Major Eduard Graf to her. Despite his clear mistrust of her, he still feels the need to protect her even if it means putting his own life and career in danger.

The book is quite fast paced, keeping your interest from the first page right through to the last as you follow the array of interesting and devious characters. The backdrop of Portugal and the mix of both real and fictional events add to the intrigue throughout. Even those who are not necessarily fans of spy thrillers will find that they will enjoy City of Spies.

This is the debut novel by Mara Timon and I have to say that I can’t wait to see what comes next, but I hope it’s a continuation of the exploits of Elisabeth as the ending certainly lends itself to more adventures.

Raised in New York, Mara Timon moved to the UK almost 20 years ago; and fell in love with London and the way it melds the old and the new. Growing up with one parent fascinated with literature and the other with history, she started writing from an early age, although it wasn’t until a programme on the BBC caught her interest, and one ‘what if’ led to another, and another, that her first book began to take shape. Mara lives in London, and is working on her next novel. When not writing, she enjoys running, Pilates, travelling, and spending time with friends and family.

One thought on “City of Spies by Mara Timon”