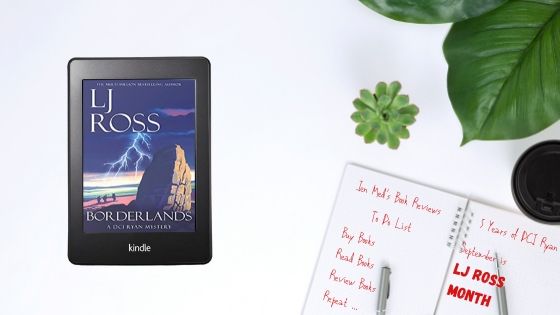 Today I’m back to share my thoughts once more on book 14 in the DCI Ryan series by LJ Ross, Borderlands. This is set in a part of the county that I admit I wasn’t really aware of, but given its use as training base for soldiers, you can just imagine the kind of wilderness and inhospitable and yet still beautiful terrain LJ Ross has brought us to this time around. Here’s what it’s all about:

When the gods made man, they made a weapon…

After uncovering a fresh wave of corruption within the ranks of Northumbria CID, Detective Chief Inspector Ryan was looking forward to an uneventful summer. But, when a young woman is shot dead on the remote army ranges of the Northumberland National Park, Ryan is called in to investigate.

Meanwhile, violent crimes are being committed across sites of historic importance in the North East, the perpetrator leaving only a graffitied symbol as their calling card. As the body count rises, Ryan and his team must unravel the mystery behind its meaning – before it’s too late…

Did I mention that I love this series? Thought so. I’m not going to apologise though as there is a very good reason – each novel contains everything I look for in a book. Compelling story, great characters and an unrivalled sense of place, all of which we get in abundance.

The DCI Ryan series by LJ Ross really does put the reader at the heart of Northumberland – carries you across every inch of parkland or cityscape, through every bog, brook or avenue – and throws you into the heart of the lives of the wonderful characters whose world we temporarily inhabit. It is a beautiful mix of thrilling action and heartfelt character study and all the richer for it.

Never has that been more obvious than in Borderlands, a story which is both a murder investigation and a look into the more sentimental and emotional side of the main characters lives. There is a line drawn this time around, with Ryan and Frank, and Jack and Mel both off in their teams investigating to very different and seemingly unrelated crimes, whilst Denise is enjoying a moment of quiet domesticity with her new ward, Samantha, and Anna shares an insight into her life with Ryan that readers have been otherwise ignorant of.

Ryan is faced with a very difficult and worrying case – the death of a young woman amidst and Army live fire training exercise, a woman who has no identity, and who should not have even been in the area with the exercise underway. Meanwhile, Jack and Mel are investigating a series of escalating race crimes in which the targets have all been various religious groups, each new crime seeming to move closer to claiming a fatality. These are two very different, but equally emotive crimes that draw you in and raise as many questions as they provide answers.

Behind this we are introduced to another character, one who may hold the key to what is happening in at least one of the investigations, and LJ Ross has done a brilliant job of creating a damaged and unreliable witness who is, ultimately, a very sympathetic and principled character. She has acknowledged the plight os so many ex-servicemen and woven it into a story which will tug at the heart strings and have you rooting for the unnamed soldier who has been so badly let down by everyone.

The main investigation is a complex one, but a story I think many readers will recognise. The author does a great job in building the sense of threat, of making the reader privy to the disturbed mind of a killer, and hiding their identity brilliantly until near to the end. The tension is high, the sense of threat always building, with ultimate feeling of overwhelming guilt never far from the surface, especially for the soldier who feels responsible for the mystery woman’s untimely death. It is hard, at first, to see how all the different storylines will pull together, but you don’t need to fear. The author is adept at keeping readers guessing but leaving us with a satisfying ending and that is exactly what you get once again.

I’ve been sad to hear that some people have been critical of the amount of personal storyline which fed into the story this time. For me, that is one of the strengths of the series, the thing that sets it apart from other police procedurals. LJ Ross is not afraid to go to the emotional heart of her characters’ lives and bring it front and centre, and the sensitive nature of how she handles one quite significant plot point (and also a constant reader question) is brilliantly portrayed. When you read the book you will understand when I say that for me it fit perfectly.

I shall be cheating on Ryan shortly, reading the first book in LJ Ross’s new series, Imposter, featuring Dr Alexander Gregory, but it will only be a brief dalliance as I can’t bloody wait for the next book in the Ryan series, due out in December, just in time for Christmas. This woman is a machine I tell you. A flipping talented one at that, and for that I am very thankful. Fans will love this book and I personally can’t wait for more. Definitely recommended.

One thought on “Borderlands by LJ Ross”