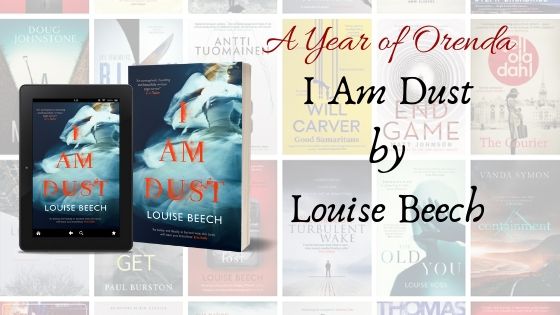 Awww, It’s the last day of Beech Week 😞 Not to worry though as Mandie is here with her review of another absolutely stunning book – I Am Dust. Kind of a gothic novel crossed with a murder mystery, this has all the emotions, chills and intrigue that you could ask for, combined with Louise Beech’s trademark beautifully lyrical writing. I reviewed this as part of the tour earlier this year and you can find my review here. Before we find out what Mandie thought, here’s what it’s all about:

When iconic musical Dust is revived twenty years after the leading actress was murdered in her dressing room, a series of eerie events haunts the new cast, in a bewitching, beguiling and terrifyingly dark psychological thriller…

The Dean Wilson Theatre is believed to be haunted by a long-dead actress, singing her last song, waiting for her final cue, looking for her killer…

Now Dust, the iconic musical, is returning after twenty years. But who will be brave enough to take on the role of ghostly goddess Esme Black, last played by Morgan Miller, who was murdered in her dressing room?

Theatre usher Chloe Dee is caught up in the spectacle. As the new actors arrive, including an unexpected face from her past, everything changes. Are the eerie sounds and sightings backstage real or just her imagination? Is someone playing games?

Is the role of Esme Black cursed? Could witchcraft be at the heart of the tragedy? And are dark deeds from Chloe’s past about to catch up with her?

Not all the drama takes place onstage. Sometimes murder, magic, obsession and the biggest of betrayals are real life. When you’re in the theatre shadows, you see everything.

And Chloe has been watching…

So this is turning out to be a hard review to write, not because I didn’t enjoy the book because I absolutely loved it. I am just not sure how to write a review that won’t spoil the book for future readers. Once again Louise Beech has changed her style and upped her game and with each book its almost like discovering a new author.

Set in a theatre this is a ghost story with a bit of a difference. Chloe works as an usher in the Dean Wilson Theatre, a place that is now a little down on its luck but is hoping that with the revival of Dust the musical, the show that put them on the map in the first place, those fortunes will change. This show put them on the map as 4 days into its run, lead actress Morgan Miller was killed, the show closed, and her killer was never found. They say that Miller haunts the theatre and once the announcement is made, Chloe starts experiencing strange things and memories of her childhood start flooding her head, and old friendships are explored.

The story is told between two timelines, we get to see the events that occurred between Chloe and her two friends, Jess and Ryan that also have an impact on Chloe’s life that ripple right into the present and lead to some dramatic moments in the Dean Wilson Theatre.

You can’t help but feel for Chloe, her life has not exactly panned out the way she would have liked, her one true love is still manipulating her and she has mental and physical scars that still cause her pain. As the story progresses, we learn more about what the three friends got up to as they started using Ouija boards in attempts to contact the dead in order to gain “powers”. I have never been a fan of such things and you have to wonder if they do contact spirits or if its just the very active imagination of 3 teenagers and the power of suggestion that is at work, but I am Dust has definitely confirmed to me that this is definitely something I will never take part in and certainly brings meaning to the saying be careful what you wish for.

The ending itself was not quite what I expected. Whilst I hoped that the mystery of the murder in the theatre would finally be solved, I did not see what eventually happened coming, but it was handled in such a way that despite the sadness you could also feel that there was a calm and sense of closure to it all. Once again Louise Beech has changed her style and upped her game and with each book it’s almost like discovering a new author and I cant wait for what she writes next.