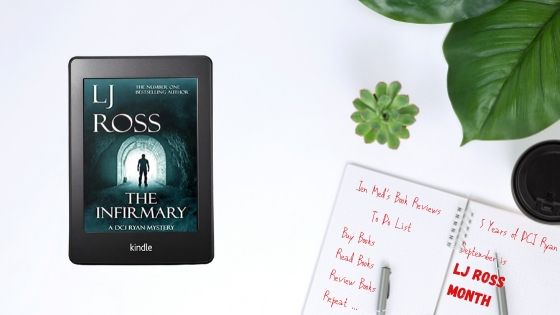 Today is a very special day. Today we make a leap back in time as Mandie takes a look back to the ‘incident’ that was the catalyst for all that was to come, some of the most exciting, character and setting rich stories you could hope to read. This is how Ryan became the Ryan we know and love today. Yep … Mandie is going to share her thoughts on The Infirmary, the DCI Ryan prequel. I listened to the multicast audio production which was excellent, and you can read my thoughts on that right here. Read on to find out what the book is all about:

No man is an island…​

In the stifling summer heat of 2014, a killer has been stalking the streets of Newcastle causing city-wide panic. When the officer in charge of the case turns up dead, it falls upon Detective Chief Inspector Ryan to take up the baton and find the person responsible.​

To the close-knit team of police in Northumbria CID, Ryan is still an outsider; aloof and uncompromising. He’s lived a charmed life and has an unbroken track record to match. But, as The Hacker’s death toll rises, Ryan realises this is one adversary he’ll never bring to justice on his own… ​

Murder and mystery are peppered with dark humour in this fast-paced crime thriller, set amidst the iconic North-Eastern landscape.

I think the first rule of reading The Infirmary should be that you can’t really discuss the events in The Infirmary without major spoiler alerts.

If you have read Holy Island then you kind of know the premise of what will happen in this book, but ‘for those that haven’t I promise I won’t spoil it for you. Ryan and co are on the hunt for a killer who is targeting what appears to be random women who all meet the same grizzly end and the suspects are endless. The question is can they work out who it is before more women are killed especially as the killer appears to be taunting them.

This book explains quite a lot. It’s the backstory of Ryan and why he now is the way he is. Its dark and disturbing and heart breaking in equal measure, but a lot of what happens to the women is implied more than actually put on the page – trust me your imagination will do the rest. It did take me a couple of minutes to get my head around the dynamic of the team but that’s because I literally started it the same day I had finished the previous Ryan book I had been reading but once I did the pace of the book just kept me reading well into the night. It was great to take that step back in time and see the close friendships forming between them all,  knowing that what happens now will have ripples in their lives for quite some time.

Not going to lie but I have been waiting ages to read this book. It has certainly divided opinion on when it should be read. Billed as book 11 (purely because that is how it had to be) it is actually a prequel, so the events predate those in Holy Island. Some believe that it should be read first, others believe that it should be read in the order the series has been written. I am in the camp of at least read the first few books in the series before you pick it up as it spoils some of the mystery of Holy Island. I didn’t technically read it in order (I read it after The Hermitage) but that’s because I like to be different.

One thought on “The Infirmary by LJ Ross”