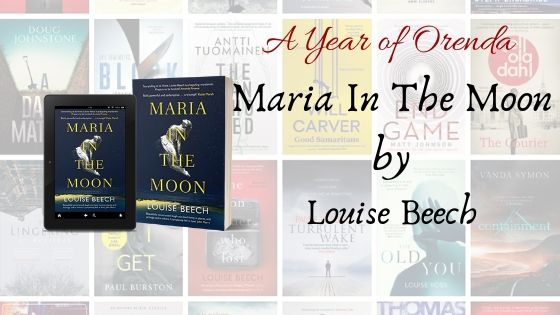 Day two of Beech Week and today I’m looking back at the beautiful but melancholic Maria In the Moon. What I love most about Louise Beech’s writing is that you genuinely never know what you are going to get. This is one woman who will not be pigeonholed into a genre and Maria in the Moon, the second book I had read, couldn’t have been any further from Mountain in terms of style or tone and was still recognisable as the author’s work just from the beauty of the prose. Mandie shared her thoughts a few weeks back, and you can find her review here. Here’s what the book is all about:

‘Like a cold spider, the memory stirred in my head and spun an icy web about my brain. Someone else crawled in. I remembered’

Dark, poignant and deeply moving, Maria in the Moon is an examination of the nature of memory and truth, and the defences we build to protect ourselves, when we can no longer hide…

Oh my life. Where to even begin. Considerably darker in tone than its predecessor, Maria in the Moon is no less capable of capturing the heart and moving the reader. The central protagonist may be older, her character seemingly harder, but much like peeling an onion, each layer of her story that you uncover will leave you one step closer to tears.

It is hard to say much about the story itself without giving away key elements of the plot. The blurb does tell you all you need to know. Catherine is just about to start volunteering at a Flood Crisis call centre and it is at her interview that we join her story. A carer by day, volunteering is something she has always felt the urge to do, no matter the emotional toll it seems to take on her. She has elements of memory black outs, in particular parts of her childhood that she simply cannot remember, and yet other parts of her life, particularly her beloved grandmother and father, the memories are as clear as day.

The story follows Catherine from that very first meeting, to her first unofficial call taken at the centre; to the friendships she forms amongst her colleagues and the emotional journey she goes on with her callers. But nothing can prepare her, or the readers, for what is to come. And it is as the long buried memories of her past slowly start to emerge from the shadowy recesses of her mind, that the story takes its darkest turn.

There is a feeling of inevitability in the things Catherine discovers about her past but this makes them no less disturbing when they are uncovered. Louise Beech takes no liberties with what is a truly moving and disturbing story, not playing anything for shock value, taking the reader just to the verge of truly uncomfortable without pushing too far and yet still making the story alarmingly, painfully, clear. She has captured the gradual erosion of the wall which has been holding Catherine’s memories at bay just perfectly. You can feel the emotion seeping from the page, acknowledge Catherine’s highs and lows, and, as the story unfurls, begin to understand more the strained relationship she has with her family.

I think one of the most powerful parts of this book is the sense of helplessness that is captured in Catherine as she takes the calls on the helpline. You know she wishes she could do so much more, often struggling between training and empathy in helping the caller find their way. Often she is faced with despair; with stories so sad it allows her to forget her own worries for a while. It is not all sob stories; there is the essence of Ms Beech’s humour in there too as the volunteers take calls from not only the lonely but also the perverse who call the centre as it’s cheaper than the premium sex line numbers. Having worked in a late night call centre, this really made me smile. I recognise many of the characters depicted here, although thankfully never had to deal with any of the latter…

But there is one caller, Stan, who really breaks the heart. Alone in his apartment, his neighbours and friends driven out by the floods, and having suffered from a stroke, his link to Catherine, or Katrina as he knows her, is everything to him. Catherine comes to rely upon him too, understanding the sense of loss within him, the loneliness. And yet in each call she takes, she is sending herself down a darker path. Recurring dreams or nightmare, triggered each time she had worked as a volunteer; emotions which impact upon her ability to bond with others. Feelings which stop her from taking tentative steps with co-worker Christopher, even though the chemistry between them is clear.

And here Ms Beech has pulled a blinder. I can’t say more other than what she has done is most beautifully executed. The gradual unveiling of each truth; the confessions of Catherine and those around her. The absolute surety of the writing which leads us to the most heart-breaking and shocking scene of all… It is hard to articulate how I felt reading that chapter, and readers of the book will know which one. Can you, or should you, feel an empathy from someone so vile, so wrong, no matter the fate that befalls them? Well… this is the power of this book, because, in spite of myself and, in a large part, because of all that had come before it, my emotions and my senses were divided. Ms Beech – you are a little tinker. A bloody skilful one but a still a tinker.

Dark, compelling and overwhelming moving. What a book!