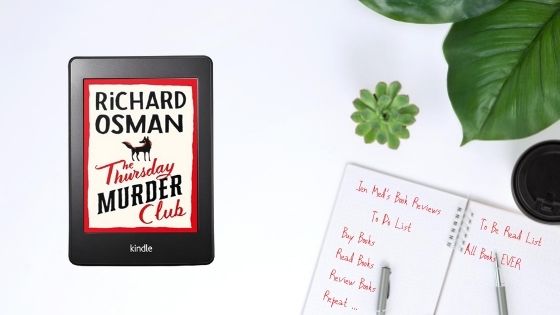 Today I am delighted to share my thoughts on The Thursday Murder Club, the brand new crime novel from Richard Osman. Yep. That one. I must admit I have been keen to read this book since I heard him speak about it during last years circuit of Crime Festivals, most notably Bloody Scotland. It sounded like fun, so as soon as I could pre-order it, I did. I was also fortunate to bag a sneak-peek copy from the publisher, Viking, too, so got my read in early. Here’s what it’s all about:

In a peaceful retirement village, four unlikely friends meet up once a week to investigate unsolved murders.

But when a brutal killing takes place on their very doorstep, the Thursday Murder Club find themselves in the middle of their first live case.

Elizabeth, Joyce, Ibrahim and Ron might be pushing eighty but they still have a few tricks up their sleeves.

Can our unorthodox but brilliant gang catch the killer before it’s too late?

Move over Miss Marple, there are some new crime solving Pensioners in town and they mean business. As I said before, I’ve been looking forward to reading this book for quite some time. intrigued by the premise and more than a little bit curious to see what kind of book we would be offered by someone who is renowned for a laid back and conversational style of presenting. It is fair to say that when you pick up this book you are getting a lot of Richard Osman with it too, the narrative tone very much a mirror for the way he comes across on the screen. But beyond this you get a story which sits very much in the cosy crime sector of the bookcase, but has brilliantly diverse characters, a twisted plot and a whole lot of mystery to boot. Put simply, I really rather enjoyed this book.

The action, if you can call it action with everything happening at the pace of your typical retirement village, centres around a small group of the village’s residents, Elizabeth, Joyce, Ibrahim and Ron, who meet up once a week to try and solve cold murder cases that, thus far, the police have been able to solve. It probably won’t surprise you to hear that they only meet on Thursday’s, but that is only because it is the only day that the Jigsaw room is free … These four intrepid Pensioners come from very different backgrounds, are really unique and likeable characters, but all with one thing in common. The desire to work out whodunnit. When murder comes knocking at their own door and they no longer need to worry about solving cold cases, they start on a quest for truth that not everyone will be happy about.

This is a classic murder mystery tale. Multiple murders to be fair, but with many little surprises along the way. This is mostly told from multiple perspectives, following each of the victims, suspects and amateur sleuths in turn as we all examine the evidence and start to solve the murder using the cleverly laid out clues. As in the tradition of all good Christie novels, our team are ably assisted in their investigations by two professional Detectives, PC Donna De Freitas and DCI Chris Hudson, because they need to get their inside knowledge from somewhere obviously. I really loved the way in which the four, especially Elizabeth, played a canny game in terms of getting the police to feed them information, whilst all the time holding back evidence and statements themselves until they had worked out their importance in the investigation. For anyone else it would be classed as some kind of misdemeanor, hindering an investigation and the like, but for his lot it made them all the more endearing.

The story is packed with more twists and turns than the cable sweaters made by the knitting club, with more than the odd surprise along the way. As we are dealing largely with people moving towards the ends of their lives, there are moments of real emotion and poingancy too, just enough to summon the odd tear, but not enough to take you away from what is for the most part a fun, often funny, whodunnit in which the Murder Club play on their apparent ‘frailties’ to meet their own agenda’s and ably show what the benefit of years of experience and wisdom can bring to an investigation. Joyce as the newest and possibly most excitable member of the team has a lot to bring to the club, and with the story interspersed with chapters from her diary, a lot to give to readers too, not just about the investigation but life in the retirement village as a whole. She may be new but in the end it is one of Joyce’s memories that proves to be a vital clue, leading to the final, most vital reveal if them all.

I really enjoyed this book and loved the dynamic that Elizabeth, Joyce, Ibrahim and Ron had between them. They are fun characters to get to know and to spend time with and although the action, and suspicion comes a little too close to home for some of them, I did find myself rooting for them from the off. Likewise Donna and DCI Hudson make for a great detective pairing and the banter and camaraderie between them and with the pensioners is a joy to read. If you like a good old cosy crime read with great characters, good humour and plenty of mystery then you are going to love this book and I’d definitely recommend giving it a whirl. I just hope there are plenty more of these to come, after all Elizabeth had a whole stack of cold case files for the club to get their teeth into … 😉

Richard Osman is an author, producer and television presenter. The Thursday Murder Club is his first novel. He is well known for TV shows including Pointless and Richard Osman’s House of Games. As the creative director of Endemol UK, Richard has worked as an executive producer on numerous shows including Deal Or No Deal and 8 Out of 10 Cats. He is also a regular on panel and game shows such as Have I Got News For You, Would I Lie To You and Taskmaster.

One thought on “The Thursday Murder Club by Richard Osman”