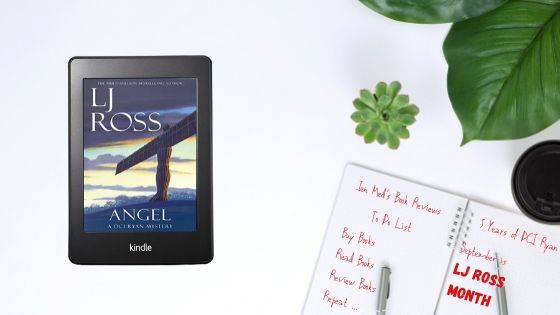 Today, as we continue to celebrate all things DCI Ryan and LJ Ross, Mandie shares her thoughts on book four in the series, Angel. If you’d like to know my thoughts (spoiler – loved it) then you can find my full review here. If you want to know what Mandie thinks, or to find out more about the book, read on. Plus don’t miss the chance to win copies of the first six book in the series. Details at the end of the post.

He’ll make you his angel, but first you have to die…

After a turbulent time, DCI Ryan’s life is finally returning to normal and he’s looking forward to spending an uneventful Easter bank holiday weekend with his fiancée.

Then, on Good Friday morning he is called out to a crime scene at one of the largest cemeteries in Newcastle. The body of a redheaded woman has been found buried in a shallow grave and the killer has given her wings, like an angel.

Soon, another woman is found at a different cemetery, followed quickly by another. Panic spreads like wildfire as a new serial killer is born, and Ryan’s band of detectives must work around the clock to unmask him before he can strike again.

Murder and mystery are peppered with romance and humour in this fast paced crime whodunnit set amidst the spectacular Northumbrian landscape.

After deciding to catch up on the DCI Ryan series I have been racing through the books at almost the same fast pace as depicted in the books and with each one I am never disappointed and I just love them. What started out as a chance read has now become one of my must buy set of books.

When a redheaded woman is found in an open grave with her body positioned to resemble that of an Angel, Ryan and co are stumped as to the motive. When the bodies of more women with the same hair colour start turning up, they are then in a race against the clock to find the killer and their motives as they struggle to find any real connection between them. You can’t help but wonder if Mackenzie herself will end up as a potential victim as she starts to receive threats and also shares the only common connection with the murdered women.

Anna has taken a bit of a back seat in this book, enabling us to really get to see more of the team dynamic and with Lowerson well and truly recovered it is great to see him develop more as a character and gel with Mackenzie. Frank Phillips is ever dependable with his no nonsense style and quick putdowns that make him and Ryan such a great partnership to watch and at times will have you chuckling and can be a welcome respite from the murder investigations.

As always, the stunning Northumbrian landscape plays a part in the dramatic storyline and the iconic Angel of the North sets the scene for the final showdown. As the investigations conclude there is yet one more twist in this tale that is totally unexpected, leaving the reader in shock and reaching for the next instalment. These books just keep getting better and better and despite you knowing that these characters are all fictional you just can’t help but get invested in their lives and the outcome of their investigations.

We are offering you to the chance to win copies of the 5th Anniversary edition paperback of the first six books in the DCI Ryan series. That’s Holy Island, Sycamore Gap, Heavenfield, Angel, High Force and Cragside. For your chance to win, all you need to do is head to Jen Med’s Book Reviews on Twitter, follow our account and reshare the pinned tweet.

One thought on “Angel by LJ Ross”

This week I shared my thoughts on Trick or Treat by @katerinadiamondauthor.
Review catch up - full review of @sigurdardottirlilja’s Cold As Hell can be found on my blog.
Today I share my thoughts in Bad Apples by @willrdean over on the blog. Link in bio.
Happy publication day @rachelamphlett.
My last review of the week was for The Ray Stone Serenade by Denzil Meyrick.
Mandie shared her thoughts on A Death In The Family by Michael Stanley over on the blog: