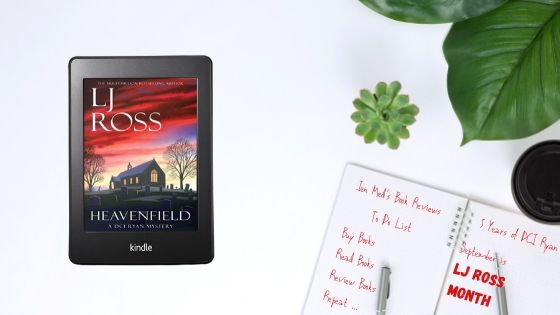 Day three of LJ Ross month sees Mandie sharing her thoughts on Heavenfield, the next thrilling instalment in the DCI Ryan series. I loved this book, and you can read my thoughts here, but do read on to find out what Mandie thought. Also, we’re offering the chance to win the first six books in the series as part of the 5th anniversary celebration for Sycamore Gap so don’t miss out. Here’s what the book is about:

The hunter becomes the hunted…

When a man is found dead at the remote church of Heavenfield, DCI Ryan is the only other person for miles around. The police have no weapon, no motive and no other suspects.

Already suspended from Northumbria CID, Ryan must fight to clear his name. But soon, more than his career is at stake when prominent members of the mysterious ‘Circle’ begin to die. Somebody wants Ryan’s name to be next on the coroner’s list and to survive he must unmask the devil who walks among them – before it is too late.

Unfortunately for Ryan, the devil looks just like everybody else…

Murder and mystery are peppered with romance and humour in this fast-paced crime whodunnit from LJ Ross, set amidst the spectacular Northumbrian landscape.

When I first read Heavenfield it was hot on the heels of reading Holy Island and Sycamore Gap, in fact I read the 3 books over 3 days they grabbed my attention that much. This time I decided to listen to the audio version and Ryan and co became my work companions and if I am honest, they were way more interesting that what I should have been doing so I may have become a little distracted the further into the book I got. This is the first time I have listened to a book that I had previously read, and it added a new dimension to the story for me as I got a better feel for the characters.

Heavenfield really does continue where Sycamore Gap left off with Ryan fighting for both his career and quick quickly for his freedom. It also sees the return of “The Circle” that featured in Holy Island. Ryan had hoped that he had seen the back of them once the case had been closed but it is quickly clear that they were still very much in force and had him in their sights.

This book keeps you guessing right from the start and even if you think you know what is going on and who is responsible as soon as you turn the next page you find that nope you were wrong and you feel the frustrations of the team as they also struggle to find out what is going on, and it is this constant guessing game that kept me hooked throughout. With Ryan temporarily out of action, Denise MacKenzie and Frank Phillips are charged with either proving or disproving his guilt. With Jack Lowerson finally back from sick leave the team are all back together and you can really see that they are more than work colleagues and consider themselves family and when one of their own appears to be under attack they work twice as hard to prove their innocence. Anna is also doing her best to help discover the truth and trying to keep Ryan out of getting into further trouble. She knows how evil the circle can be and how they can rip loved ones apart with apparent ease and she is determined that they will not succeed this time.

Once again, the Northumbrian countryside is almost like an additional character in the book and the settings for me are almost as much a draw to the books as the content itself. Whilst you could quite easily pick up this book without having read the first two, I am not sure why you would want to as you will be missing out on some great reading. Now I am off to read the rest of the series to see what else is in store for the team.

We are offering you to the chance to win copies of the 5th Anniversary edition paperback of the first six books in the DCI Ryan series. That’s Holy Island, Sycamore Gap, Heavenfield, Angel, High Force and Cragside. For your chance to win, all you need to do is head to Jen Med’s Book Reviews on Twitter, follow our account and reshare the pinned tweet.

One thought on “Heavenfield by LJ Ross”