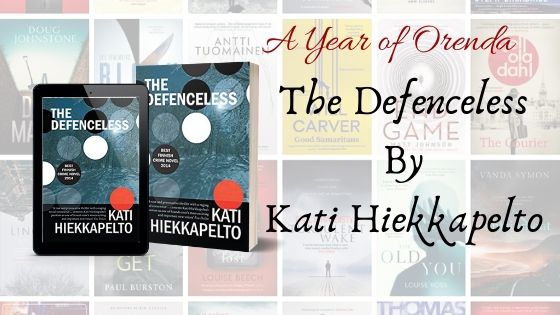 Today I am delighted to say a very happy fifth anniversary to Orenda Books and Kati Hiekkapelto as it is five years today since the paperback publication of The Defenceless, book two in the Anna Fekete series. I have loved catching up with Anna’s earlier stories as part of our year of Orenda challenge. These stories always have an emotional heart and this was no exception. Here’s what it is all about:

When an old man is found dead on the road seemingly run over by a Hungarian au pair police investigator Anna Fekete is certain that there is more to the incident than meets the eye. As she begins to unravel an increasingly complex case, she’s led on a deadly trail where illegal immigration, drugs and, ultimately, murder threaten not only her beliefs, but her life.

Anna’s partner Esko is entrenched in a separate but equally dangerous investigation into the activities of an immigrant gang, where deportation orders and raids cause increasing tension and result in desperate measures by gang members and the police themselves.

Then a bloody knife is found in the snow, and the two cases come together in ways that no one could have predicted. As pressure mounts, it becomes clear that having the law on their side may not be enough for Anna and Esko.

Chilling, disturbing and terrifyingly believable, The Defenceless is an extraordinary, vivid and gripping thriller by one of the most exciting new voices in crime fiction.

True to form I have approached reading the Anna Fekete series in completely the wrong way. I started with book three, my first outing with our protagonist and this was a very different kind of read as the action took place in Anna’s native country. Then I read book two, this book, The Defenceless, because how else would you expect me to catch up on all that had gone on before, finishing off with book one. Obviously. The good news for all the contrary souls like me out there in the wild, all of these stories stand well on their own and whilst I had some clues about book one from reading this one, it wasn’t enough to act as a spoiler or ruin my enjoyment. If anything I was far more invested in Anna as I knew what she was all about, both inside and outside of Finland. I understood what it was that made her tick. in other words, I really blooming enjoyed them all.

The Defenceless carries on in the series signature style – a blend of murder investigation and socio-political commentary which Kati Hiekkapelto really excels at. Once again Anna is faced with a kind of dual caseload – one the death of an unnamed old man, possibly as a result of being struck by a motor vehicle, the other the case of a young immigrant who is not only on the run from the authorities as his asylum claim has been denied, but addicted to addicted to drugs, an addiction which puts him firmly in Anna’s sights and that of her rather objectionable partner, Esko, but for two very different reasons. Esko is after the big conviction, the case breaker that can make his name legend. Anna is merely seeking the truth.

For me, it is the author’s sympathetic presentation of the prejudice and intolerance of some of the Finnish community towards immigrants that really makes this series stand out. She is not afraid to tackle the unspeakable, to present the lives of those seeking a better life in a far more sympathetic way than some of her characters feel towards them. Much like in The Hummingbird she looked at the case of honour violence and the worst kind of misogynistic application of the Muslim faith, this time around we are faced with the fate of immigrant Sammy, a young boy who has travelled to Finland in search of asylum having seen his entire family taken and, almost certainly killed for their beliefs. Kati Hiekkapelto examines the complexities of the immigration system without passing judgment but making clear the difficulties that people such as Sammy face when they cannot prove the very real threat to their lives. In this case it makes Sammy do something truly unthinkable, something that Anna feels is senseless, but which in Sammy’s eyes is better than the alternative fate which almost certainly awaits him.

Once again we are delivered a story which is high in tension and rich in both mystery and atmosphere. The clash of characters between Esko and Anna adds a layer of conflict to an already intense story and the mysterious death of not one but two residents of one tower block, alongside the disappearance of the other gives Anna and the team a lot to get their teeth into, and a lot for the reader to ponder over. We learn a little more of Anna’s character too as she is thrust into the role of interpreter for the young woman, Gabriella, who is suspected of causing the old man’s death, a fellow Hungarian. Yes, we see her self isolating side, her reluctance to bond with Gabriella hidden behind her notion of a conflict of interest as she is investigating Gabriella’s case. Technically true but it is clear that there is more to this than that and seeing that, and more of her relationship with her brother, Akos, is fascinating. Plus there are some very significant changes in Anna’s personal life that will force her to make some difficult decisions.

With the links back to drug gangs and organised crimes playing out as a backdrop this investigation there is always an underlying tension, often magnified by threats made against Esko’s life. He is playing a dangerous game, but to what end, you have to follow the story through to find out. Needless to say with his lifestyle, there is no greater risk to his life than himself, but least said soonest mended there. Let’s just say he hasn’t managed to work on his charm between the two books. Then again, Anna is hardly a social butterfly all all round everyday best-friend herself…

With The Defenceless the author has delivered a story rich in atmosphere and with an acute sense of place. We have a story with an emotional heart, where the application of justice does not always feel entirely fair and which will leave you with a touch of melancholy. It concludes in perhaps the only fitting way, the only authentic way, and yet it doesn’t mean we have to like it. There is a feeling of the inevitable from the very beginning but the author pulls us in, makes us care just enough, that you would still like to believe that another outcome is possible. Tough, gritty and often emotional, another brilliant read.

Kati Hiekkapelto was born in 1970 in Oulu, Finland. She wrote her first stories at the age of two and recorded them on cassette tapes. Kati has studied Fine Arts in Liminka Art School and Special Education at the University of Jyväskylä. The subject of her final thesis/dissertation was racist bullying in Finnish schools. She went on to work as a special-needs teacher for immigrant children. Today Kati is an international crime writer, punk singer and performance artist. Her books, The Hummingbird and The Defenceless have been translated into ten languages. The Hummingbird was shortlisted for the Petrona Award in the UK in 2015 and The Defenceless won the prize for the best Finnish Crime Novel of the Year 2014, and has been shortlisted for the prestigious Glass Key. She lives and writes in her 200-year-old farmhouse in Hailuoto, an island in the Gulf of Bothnia, North Finland. In her free time she rehearses with her band, runs, hunts, picks berries and mushrooms, and gardens. During long, dark winter months she chops wood to heat her house, shovels snow and skis. Writing seems fairly easy, after all that.