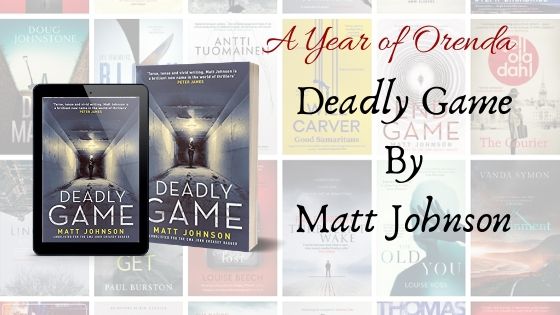 Today it is back over to Mandie who continues her Year of Orenda challenge with a review of Deadly Game by Matt Johnson, book two in the Robert Finlay series. I love these books, full of action, threat and thrills, and I have to say I’m a huge fan of Mr Johnson too as he is a genuinely lovely chap. If you want to find what I thought of the book then you can find my review here. To find out if Mandie agrees with me, you’ll just have to carry on reading.

Reeling from the attempts on his life and that of his family, Police Inspector Robert Finlay returns to work to discover that any hope of a peaceful existence has been dashed.

Assigned to investigate the Eastern European sex-slave industry just as a key witness is murdered, Finlay, along with his new partner Nina Brasov, finds himself facing a ruthless criminal gang, determined to keep control of the traffic of people into the UK. On the home front, Finlay’s efforts to protect his wife and child may have been in vain, as an MI5 protection officer uncovers a covert secret service operation that threatens them all …
Aided by new allies, he must not only protect his family but save a colleague from an unseen enemy … and a shocking fate.

Deadly Game is a stunning, terrifying and eye-opening thriller from one of the most exciting new names in crime fiction.

Deadly Game is the second book in the Robert Finlay series,and it takes up not long after the first book ends with Finlay and his wife Jenny trying to get back to some semblance of normal after the recent events. As he tries to get back to work, he finds that due to his past being revealed there are those that do not want to work with him and think he should have been punished for the things he did and this leads to his move to the newly formed sex crimes unit as a plain clothes detective.

Although his new assignment sees him deal with a new kind of criminal you would hope that his life was a little more straightforward than it had been but unfortunately Finlay is not quite that lucky. Once again he is at the mercy of someone who he trust manipulating him for their own ends, even if they believe they are justified in what they are doing and that some of it will actually benefit Finlay and his wife in the long run.

We really get to see more of Finlay as a person in this book as he gets some down time from the force. He is very loyal to his family and colleagues and he is far from perfect, but that is what makes him such a great character. His interaction with his new partner Nina Brasov shows that he is not one to fall on rank in the force and he treats her as his equal. In return she shows on more than one occasion she has his back.

With the action non stop this book certainly held my attention throughout. With the sex slave trade at its core this book does not shy away from things that are unpalatable to read but at the same time there is nothing gratuitous either. I can honestly say that if you had asked me a few weeks ago if this would be the type of book that I would read I would have said probably not. There is something about the way that Matt Johnson writes that really gives his characters a believable feel about them that has you routing for them when things get tough.

This is a brilliant follow up to Wicked Game and I am looking forward to getting stuck in to the final instalment of this series to see what is in store for Robert Finlay next.

Matt Johnson served as a soldier and Metropolitan Police officer for twenty-five years. Blown off his feet at the London Baltic Exchange bombing in 1993, and one of the first police officers on the scene of the 1982 Regent’s Park bombing, Matt was also at the Libyan People’s Bureau shooting in 1984 where he escorted his mortally wounded friend and colleague, Yvonne Fletcher, to hospital. Hidden wounds took their toll. In 1999, Matt was discharged from the police with Post Traumatic Stress Disorder. While undergoing treatment, he was encouraged by his counsellor to write about his career and his experience of murders, shootings and terrorism. One evening, Matt sat at his computer and started to weave these notes into a work of fiction that he described as having a tremendously cathartic effect on his own condition. His bestselling thriller, Wicked Game, which was shortlisted for the CWA John Creasey Dagger, was the result.