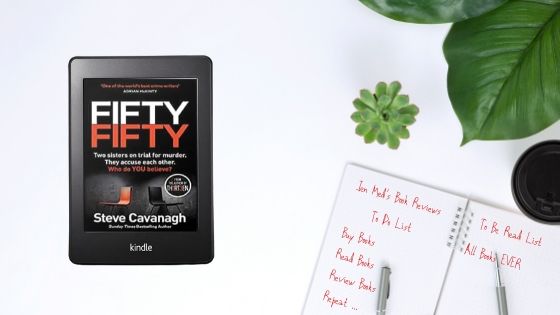 Today I am delighted to share my thoughts on Fifty Fifty by Steve Cavanagh, the much awaited follow up to Thirteen. Thirteen was my first taste of Eddie Flynn and I loved it so I was thrilled to be offered an early read of this book, Did it live up to my expectations? Well …. read on to find out. Thanks to Alex Layt at Orion for inviting me to join the tour and providing the advance copy of the book.

Two sisters on trial for murder. They accuse each other.
Who do YOU believe?

‘My dad’s dead. My sister Sofia killed him. She’s still in the house. Please send help.’

‘My dad’s dead. My sister Alexandra killed him. She’s still in the house. Please send help.’

One of them is a liar and a killer.

I came very late to the Eddie Flynn series and for that I am full of regret. The good news is that I have the opportunity to go back and catch up on those first books that I have missed. The even better new is that the series continues to thrill and it looks like we can expect much of the same in the future. Good news indeed!

Fifty Fifty is the story of sisters – Sofia and Alexandra. Both stand accused of their father’s murder. Each blames the other. Their’s is the kind of sibling rivalry and toxic relationship that makes me re-examine the relationship with my own siblings and realise that, as dysfunctional as we are, we are not that dysfunctional. The more we read, the more we learn about the very testing circumstances under which the two women were raised, but also the extent that one of the them will go to in order to ensure that her sister is convicted of murder, a murder that she knows the other woman did not commit. But just who is the guilty party and what price will Eddie Flynn find himself paying this time around? Can his legendary instinct serve him well this time around or will he be backing entirely the wrong horse? Well … you need to read to find out. That’s how these things work.

The story really follows three different threads. First up we have Eddie and his client, Sofia. Told from Eddie’s point of view, watching him and his investigator, Harper, as they work together to prove Sofia’s innocence whilst skirting around their obvious attraction for one another is always fun. This time around Eddie finds himself with a new assistant – newly returned former Judge Harry Ford and his new sidekick, Clarence. They make a formidable team and even though the odds aren’t in their favour you really wouldn’t bet against them. Our next point of view is that of new kid on the block, Defence Attorney Kate Brooks. I must admit some of her early scenes made me so angry and want to damage my kindle, but not because of Kate. She’s actually really nice and you’ll be rooting for her straight off. Naive perhaps, but a good gal and it is great seeing her grow throughout the course of the novel. She is not quite the match to Eddie, yet, but she definitely has the potential as well as the determination and absolute confidence in her client, Alexandra’s, innocence. Only one problem – Eddie and Kate can’t both be right. Can they?

The third, and final, point of view is that of our killer, named simply as She. She is quite the piece of work and I like the way in which Steve Cavanagh uses her perspective to paint a far more detailed picture of the family life of the two accused, as well as highlighting certain ticks and traits in the killers pesona that might, just might, give away vital clues as to their identity. It’s fair to say that they are a completely mercenary character, absolutely no remorse shown for their actions, although their ultimate motivation for murder may surprise you.

I have to be honest here – despite the cleverly hidden clues and the misdirection that the author uses liberally throughout the book, I did make my mind up as to who the killer was quite early on, and I was, in the end, proven right. But that is the beauty of this book – it constantly encourages you to try and work out who the guilty party really is, whilst also working hard to make you second guess your own logic. Is it as obvious as it seems or an elaborate double bluff. Or is the double bluff a double bluff too? The back and forth between the two suspects, the challenge against the seemingly overwhelming evidence. Watching first Kate and then Eddie try to make mincemeat of the prosecution’s expert witnesses is a thing of beauty, thoroughly entertaining and at times the book is worth reading for that alone. Cast iron evidence? There’s no such thing.

One thing is for sure, Steve Cavanagh will shock fans of the series with the direction he decides to take this story. Whilst the murder is beyond brutal, it is largely kept off the page, and yet the impact of what you read will be long lasting. This is one dance with death not one of the characters will forget in a hurry.

Thank the lord for Clarence Darrow. A much needed moment of light in the darkness. Definitely recommended.

Steve Cavanagh was born and raised in Belfast before leaving for Dublin at the age of eighteen to study Law. He currently practices civil rights law and has been involved in several high profile cases; in 2010 he represented a factory worker who suffered racial abuse in the workplace and won the largest award of damages for race discrimination in Northern Ireland legal history. He holds a certificate in Advanced Advocacy and lectures on various legal subjects (but really he just likes to tell jokes). He is married with two young children.

One thought on “Fifty Fifty by Steve Cavanagh”