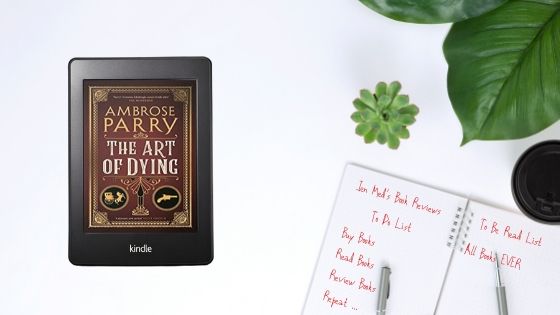 Today Mandie shares her thoughts on The Art of Dying by Ambrose Parry, book two in the Will Raven series. We both love this Edinburgh set historical crime fiction which skirts along the edges of medical fact, blending it with absolutely cracking storylines. Read on for Mandie’s thoughts and to see what the book is all about:

Despite being at the forefront of modern medicine, hordes of patients are dying all across the city, with doctors finding their remedies powerless. But it is not just the deaths that dismay the esteemed Dr James Simpson – a whispering campaign seeks to blame him for the death of a patient in suspicious circumstances. Simpson’s protege Will Raven and former housemaid Sarah Fisher are determined to clear their patron’s name. But with Raven battling against the dark side of his own nature, and Sarah endeavouring to expand her own medical knowledge beyond what society deems acceptable for a woman, the pair struggle to understand the cause of the deaths.

Will and Sarah must unite and plunge into Edinburgh’s deadliest streets to clear Simpson’s name. But soon they discover that the true cause of these deaths has evaded suspicion purely because it is so unthinkable.

The Art of Dying is the second outing for Will Raven and Sarah Fisher by the husband and wife writing team that make Ambrose Parry. Having moved forward by a couple of years things have certainly changed for both of them. I loved The Way of All Flesh as it really played to my love of history, so I was excited about the next instalment in this series as I couldn’t wait to find out what life would throw at these two people. I am just such a slow reader it has taken me until now to find the time to give the book the attention it deserved. It was worth the wait as it definitely matched the first book and kept me hooked until the end.

Will is now a qualified doctor and has been moving around gaining further experience of medical procedures. On his return to Edinburgh to take up a position back with Dr Simpson, this time as his assistant rather than his apprentice, he discovers that Sarah is now married. This information throws him, but when he discovers that she is actually married to a Doctor herself, he begins to realise what he has lost and how much of a coward he had been.

The relationship between Will and Sarah does still provide some of the tension and drama in this book but the main focus is on discovering who is responsible for multiple deaths of Edinburgh citizens. What initially starts out as a discreet investigation to clear Dr Simpsons name after the death of the wife of a fellow doctor, turns into something far more disturbing. Once again Will finds himself dragged into the association of some of the more undesirable elements of the city, that could put both his life and career in danger, but nothing will stop him from discovering the truth.

God I love this series. The historical element draws me in as actual events are merged with fiction to make the story believable and intriguing. I am really enjoying discovering more about medical practices of the time, expanding on the bits that I learnt about at school when we did medicine through time. If you are a history nut like me then they really will be right up your street. But even if you are not necessarily into historical fiction, I really think you should give these books a try as the characters and the stories are really engaging. The interaction between Will and Sarah can at times bring a smile as you witness the countless push against society constraints of the time and the genuine affection they have for each other. Now that I have finally read the book I am a little bit lost but also eagerly awaiting the next outing for these two fabulous characters

Chris Brookmyre is an international bestselling and multi-award-winning author whose books have sold over one million copies. Marisa Haetzman is a consultant anaesthetist of 20 years’ experience, with a Master’s in the history of Medicine which formed the research for this book.

2 thoughts on “The Art of Dying by Ambrose Parry”