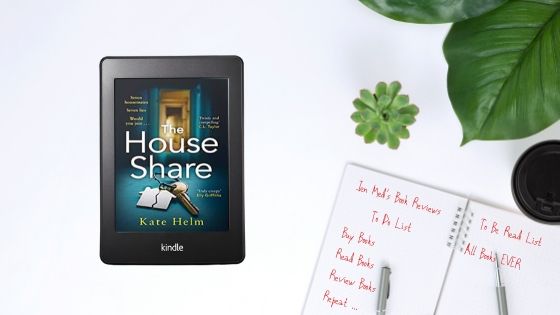 Today it is my pleasure to share my thoughts on The House Share by Kate Helm. My thanks to publishers Zaffre for providing a copy of the book for review. Here’s what it’s all about:

The Hunting Party meets Our House in this gripping, claustrophobic new locked-room thriller. When you’re sharing a house with seven murder suspects, you can’t lock the danger out . . .

Immi think she has found the perfect new home in central London: a shared warehouse with luxury accommodation, a rooftop terrace and daily yoga, all with a surprisingly affordable price tag. The Dye Factory is a ‘co-living’ community, designed to combat the loneliness of big city life.

But soon after she moves into her new haven, Immi realises that it’s not quite as idyllic as it appears. No one seems to know who is behind this multi-million pound urban experiment. And her housemates may be hiding a dangerous secret.

Then, as a series of pranks escalates into something much darker, Immi is left questioning whether, in this group of strangers, she can ever really be safe . . .

When I first started reading this book I wasn’t quite sure where it was going. It is somewhat of a slow build and it took me a while to get into my stride with both the story and the characters. Once I made it past the first few chapters, where Dex and Immi first arrive at the Dye Factory hoping to bag themselves a place as one of the housemates, I found myself being drawn into a world which was crazy, hypnotic, very contrived and almost so unnaturally insular as to be claustrophobic. Beyond the clear secrets that Immi is holding, it is clear the the ‘Dyers’ the other residents of the house share, are all hiding something but how dark are the secrets and how far will they go to keep them.

This is a very unusual concept for a novel. I’ll be honest, having spent time in a halls of residence at University, I’m not sure the communal living thing is an experience I would be keen to repeat. It has its place for sure, and given the escalating price of life in London, I can understand the appeal, but still. If something seems too good to be true, it probably is, and with it’s shared living, honesty bars, yoga, resident pets (for mental health, obviously) and weekly app updates, not to mention the whole concept that you must ‘give back to the community’, and the needing to not only audition for your place but spend a month on probation once you get in, I would be running for the hills, subsidised living or not.

Sadly for both Immi and Dex, The Dye Factory is their last hope. Both need a fresh start, more than their new housemates can understand, and as we slowly get to know them both, the more we realise that they have been somewhat economical with the truth to secure their place. But what are they hiding. In fact what is everyone hiding as none of the residents seems to be one hundred percent honest and each of they has one or more quite significant character flaws. The more time we spend in their company, the more unnerving and, as a result, addictive, the story becomes. I found myself drawn in as much because of that need to know what the dark secret was as much as to see if Immi made it back out the other side unscathed. It’s fair to say that was a tall ask of any of the characters.

Kate Helm has done a great job of creating that atmosphere that teeters right on the edge of being a cult but not quite making that full leap. There is a sense that whilst residents are technically free to leave, the game is played so carefully as to make it virtually impossible for them to do so. She has also created some brilliant characters. I didn’t warm to any of them, Dex and Immi included, because they all came across as selfish, even when being seemingly altruistic in their actions. They are all individual, each with a distinct voice and character, but I didn’t like them. Dex and Immi were perhaps the closest to being likeable, perhaps because they were new to the house, still not quite part of the community. Immi especially struggled to fit in, doing just enough to avoid eviction but ultimately playing them at their own game when it came to her final evaluation on decision day. But at what cost …?

This was an intriguing novel, a look into a kind of social experiment that goes beautifully wrong. The truth behind the story, the reasons for all of the strange things that happen over the course of the book, was a little surprising and yet strangely fitting, and the author retained that edginess, that sense of some underlying tension and deceit, that sense of everyone, even the reader, being manipulated right to the end. Even the final chapter brought a smile to my face, it was pitched perfectly. If you like a slow burning psychological thriller that is slightly claustrophobic, then this could definitely be the book for you.

Kate Helm was born in Lancashire, and worked as a journalist covering courts and crime, before becoming a BBC reporter and producer in news and current affairs. She also wrote documentary and drama scripts, including the BBC1 programme: Angel of Death: The Story of Beverly Allitt. Kate Helm is a pseudonym for author Kate Harrison whose non-fiction and novels have been sold in 20 territories and sold over 800,000 copies. Kate lives in Brighton, this is her first book under the name Kate Helm and her debut adult crime novel.