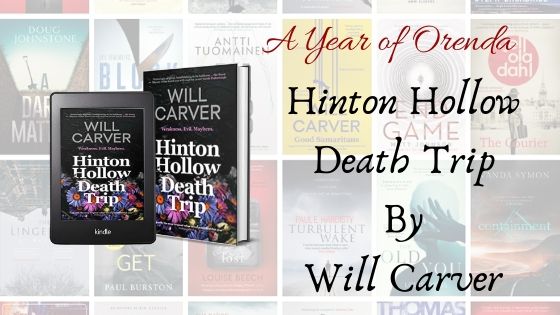 Today it is my great pleasure, I think(?), to be joining the blog tour for Hinton Hollow Death Trip, the third book in the Detective Sergeant Pace series by Will Carver. I say think because I’m not entirely convinced pleasure is a sentiment that entirely fits this book, it almost seems wrong. But I am delighted to be sharing my review so a big thank you to Anne Cater of Random Thing Tours and to publisher Orenda Books for including me. Here’s what the book is all about:

It’s a small story. A small town with small lives that you would never have heard about if none of this had happened.

Little Henry Wallace was eight years old and one hundred miles from home before anyone talked to him. His mother placed him on a train with a label around his neck, asking for him to be kept safe for a week, kept away from Hinton Hollow.

Because something was coming.

Narrated by Evil itself, Hinton Hollow Death Trip recounts five days in the history of this small rural town, when darkness paid a visit and infected its residents. A visit that made them act in unnatural ways. Prodding at their insecurities. Nudging at their secrets and desires. Coaxing out the malevolence suppressed within them. Showing their true selves.

Detective Sergeant Pace had returned to his childhood home. To escape the things he had done in the city. To go back to something simple. But he was not alone. Evil had a plan.

I have brain pain. In a good way, of course, but it is still pain. It’s a week on from finishing reading Hinton Hollow that I am writing this review and I still have literally no idea what to say or how to quantify my thoughts having read it. I am trying to work out if Mr Carver is a genius or just crazy, but either way, I get the feeling he’d probably take it as a compliment.

Book three in the loosely defined Detective Sergeant Pace series and what a book this is. If you thought that Nothing Important Happened Today (NIHT) made you question the very nature of society and how they view tragedy, how easily you can be manipulated, well … this book is going to take that feeling and amplify it – a thousand-fold. The book sees Pace leaving London to return to his childhood home of Hinton Hollow – population 5120 – a small town that people rarely seem to leave and in which every life is interconnected. And yet, despite leaving his partner, Maeve, behind in London, Pace does not return to Hinton Hollow alone. He has a … follower. The narrator of this story. The overseer of all.

Yep. You read that right. You did not misread the blurb. You have not misread this review. Our storyteller is Evil them self. And I’ve got to be honest, they/he/she (who knows) are quite straight talking. Not in a twisted, ignore God, eat that there apple kind of way. They just really tell it like it is. Call out society for all of their bullshit and cover the world in a shadow. A shadow, that for Pace and for the inhabitants of Hinton Hollow, proves quite deadly.

Now I don’t want to say a lot more than that. You really do have to read the book to fully understand. We are not talking a manifestation of Satan stalking the streets and poking people with his great big tident or anything, far from it. It is far more subtle than that and easily recognisable as a result. Will Carver has taken the actions and decisions, the lack of morality inherent in modern society, and brandished it as a weapon capable to causing great devastation to this once quiet community, and that simplicity, that everyday feel of what happens makes the story far more impactful as a result. A quiet comment here, a snide comment there, the act of gluttony of sloth, avarice … A secret shared that triggers a chain reaction from which there is no return.

This was not a one sitting read for me, not at all. It was a difficult book to read at times (Day two will definitely provoke a reaction in some), and to be fair to Evil, they do warn us as readers many, many times to turn back and, if you are easily offended, you probably should. Because this book acts as a mirror to society, perhaps a little tarnished at the edges, but it will make you think about your own reactions to what you are reading, not necessarily sitting in moral judgement, but definitely challenging you to justify why one part of the book is just fact, the other makes you go awwww – no fair. Why certain acts committed seem more tolerable than others. Makes you think about how you would react in certain =situations. We all like to think we would do the honourable thing – the ‘right’ thing – but one thing you will come to expect is that even seemingly decent people can sometimes make the wrong choices and those choices have consequences.

Once again, Will Carver has created such a diverse cast of characters, all of which bring the town of Hinton Hollow to life. Pace has become a progressively more haunted man as the books have gone on and it is certainly true this time around, and not just because Evil is watching. I really do like him as a character, despite how dour he often appears to be. Then there is Mrs Beaufort. I think we all know a Mrs Beaufort. Matriarch of the town she inserts herself into every situation, never quite trusting Pace, perhaps for good reason – who knows. Then there is Darren. I don’t know quite what to make of Darren. In some (most) respects you can’t help but hate him, in others … Well I’ll let you judge him for yourself.

Lord, there is so much I want to say about this book, so much I can’t. Yes, it has that slightly angry, judgmental essence that prevailed in NIHT, and who better to judge us than Evil right? It is dark, full of sharp but very black humour. It will shock, it will stun you and it will certainly have you second guessing many of your own life choices because if you don’t recognise just a little of yourself in a least one of the characters or situations here, then someone in this reviewer/reader exchange is probably lying. (It’s not me …) Written in fast paced, first person, conversational style, I love the way in which the author has pre-empted the narrative to come at the start of each chapter, creating the anticipation of what madness and mayhem is yet to come.

And then that ending … I know it often said, but really. If you have read all three books, and I certainly advise you do, then you will get it. You will know what is implied but is not written. For a self-proclaimed ‘small story’ it packs one hell of a punch.

Evil is here. I just hope it never pays a visit to my house. I am sure to be found wanting … Excellent book. Most definitely recommended. (Please note – the lovely flowers on the cover imply far more cute and wholesome than the contents provide. You have been warned).

And yes. It can you can have one of these Mr Carver, crazy creative genius that you are.

Will Carver is the international bestselling author of the January David series. He spent his early years in Germany, but returned to the UK at age eleven, when his sporting career took off. He turned down a professional rugby contract to study theatre and television at King Alfred’s, Winchester, where he set up a successful theatre company. He currently runs his own fitness and nutrition company, and lives in Reading with his two children. Good Samaritans was book of the year in Guardian, Daily Telegraph and Sunday Express, and hit number one on the ebook charts.

Books by Will Carver