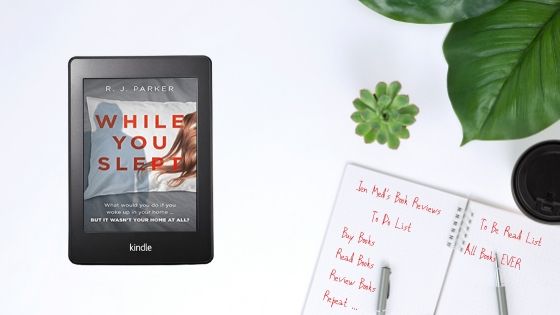 Today I am sharing my thoughts on the latest novel from RJ Parker, While You Slept. I’m a huge fan of the author’s work and so have been looking forward to this one. My thanks to the publisher One More Chapter for providing an advance copy for review. Here’s what it’s all about:

What would you do if you woke up in your home… but it wasn’t your home at all?

When a man wearing a picture mask of her daughter Maisie’s face stands tauntingly in her garden, Lily Russell does the smart thing and calls the police. When she and Maisie wake up the following morning in an exact replica of their home, held captive by that same man, the police are no longer an option.

Surrounded by the rooms and things that once provided comfort and now only promote fear, Lily and Maisie must fight to survive. Because when no one knows where you are, you are your only hope.

What I do enjoy about reading a Richard Parker novel is that he is not afraid to take a subject which is a little outside of the norm and spin it into a story that will keep you entertained to the very last page. He has certainly done that with While You Slept, a story that has a very strange appeal but rather dark undertones too. I won’t lie – this isn’t as dark as some of his other work so you aren’t going to find anyone duelling with a mobility scooter here. The threat and the dark edge are far more subtle than that.

You are thrown into the action right from the off with the opening scenes showing protagonist Lily watching a man in her garden via her home security set-up. So far so normal – that’s what those kits are for. But this man is wearing a mask of her young daughter’s face – and this, whilst troubling, is probably one of the most straightforward problems she faces throughout the whole book. The police can do very little – there was no actual break in after all. But when Lily wakes up the next day it is in surroundings that are both familiar and unsettlingly wrong too. Whilst she and her daughter were asleep, someone has taken them and moved them to an exact replica of their home – with one small difference. This is a home from which they can never leave.

There is a constant sense of unease throughout the book, for obvious reasons. The only communication that Lily and Maisie have with the outside world is with the man who abducted them, a man who proves time and again how easily he can get to them and potentially hurt them. It does kind of make your skin crawl, that constant sense of being watched, not knowing if the food they have been left with has been tampered with but knowing that the intent is to keep them there, completely isolated, for a very long time. You do get a sense of the panic within Lily and the despair within Maisie and the chilling way in which their captor slowly lays out their intent.

What we do not know is the motivation behind the abduction, something that is revealed quite late on in the story and, to be honest, from out of nowhere to a degree. There is no hint of it throughout the rest of the book which makes the targeting of Lily seem even more random and , in a way, chilling. There are element of this book though where you will need to suspend disbelief a little, certainly as Lily and Maisie make a bid for freedom. The whole abduction lasts only a matter of days, but they are certainly eventful one as the abductor keeps his captives on edge. I enjoyed the story for what it was though, a short sharp, relatively fast paced read that I completed in a single evening.

I will be honest and say that, at times, Maisie, who is only five years old, seemed to have too strong a vocabulary and sense of awareness for her age. Now I am no expert – not a parent, don’t even go there – but I have a lot of nieces and nephews and I don’t recall any of them being quite so strong and adult in character as Maisie. It may just be me – perhaps I am selling young children short. I know there is literally no telling what will come from some of their minds or mouths at times – but I think if she had been just a little older, how she behaved, how she spoke, would have been more understandable. There are clear moments of vulnerability, where her reaction to their captivity matches her age and it can be emotional, but at times she displays far more maturity and sense than her mother.

All in all an intriguing and original story that I know fans of the author will enjoy.

THE DINNER PARTY is his latest stand alone thriller and has been called ‘the most addictive, twisty, psychological thriller of 2019.’

One thought on “While You Slept by R.J. Parker”