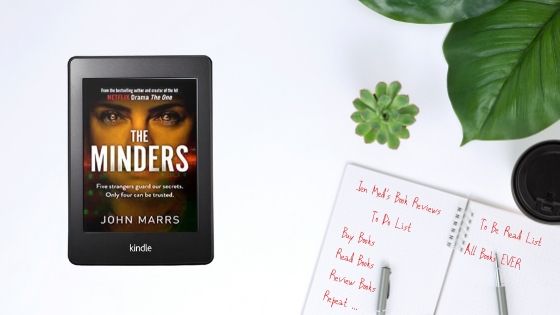 Today it is my great pleasure to be joining the blog tour for The Minders, the brand new thriller from John Marrs. My thanks to Isabelle Ralphs for inviting me to join the tour and for providing the advance copy of the book for review. Here’s what it’s all about:

Five strangers guard our secrets.
Only four can be trusted…

In the 21st century, information is king. But computers can be hacked and files can be broken into – so a unique government initiative has been born. Five ordinary people have been selected to become Minders – the latest weapon in thwarting cyberterrorism. Transformed by a revolutionary medical procedure, the country’s most classified information has been taken offline and turned into genetic code implanted inside their heads.

Together, the five know every secret – the truth behind every government lie, conspiracy theory and cover up. In return, they’re given the chance to leave their problems behind and a blank slate to start their lives anew.

But not everyone should be trusted, especially when they each have secrets of their own they’ll do anything to protect…

Okay – first things first. If you haven’t yet read The Passengers by John Marrs (and why not), then you might want to consider doing so before reading this book. Not essential, but they are both set in the same dystopian world and there are several links back to that book and his earlier novel, (and soon to be Netflix favourite) The One. If you have read both books (good on you) then you will recognise the references in this book and the knowing smiles will appear in quick succession.

The book opens with a rather … unusual attempt made to steal classified government information. I say unusual because of the way that the information is being kept safe. Not half as strange as it is set to become, but certainly not something one would anticipate being the number one method of cyber protection in the current world. That said, as demonstrated in ‘other’ books and, sadly, in modern life, cyber crime is on the rise and there is no such thing as a system that is entirely safe from hackers. And so in come the ‘Minders’ – a group of individuals with a very specific talent who are to be trusted with some of the most valuable, and often damning, secrets that the state holds.

The story takes us through the lives of the four individuals in question as they set about making a new life for themselves. leaving behind family, friends and, in essence, everything they know, in a bid to keep themselves, and the secrets they hold, safe. The four could not be more different and it is the real skill of the author that he is able to create characters who are immediately fascinating, if not always likeable. I could identify with them, in a different kind of way each time, even if I did not always agree with their actions. Each has their own reason to want to escape, all of which are revealed throughout the course of the novel, but it is Flick that I really liked the most. Possibly because she has the dubious honour of matching with one of my favourite characters from ‘The One’, but also because she was the only one of the four to really retain the core of who she was. Down to earth, level headed and someone you could imagine wanting to be friends with, no matter how dangerous that concept may prove to be.

This being a John Marrs story, there is a sting in the. tale, a twisted complex and multi-layered back story which is woven throughout the book. You wonder where and how it ties in with everything else – an experiment gone wrong perhaps – and as the story plays out the tension, and the speed of the action, begins to increase. This was a book that had me from the start and kept my attention right to the last page. You don’t always know who to trust, can’t immediately tell where the true threat comes from. Not even the four main characters can really be trusted and some of the secrets they hold … well put it this way, it’s the kind of information that could bring down a Government if not a whole country.

I think this is classic Marrs, definitely in the same gripping and character driven style as The One, and I loved it. Conspiracy theories abound, some of this story is not all that unbelievable, partly rooted in the gradual progression of science and technology as it starts to take over our lives. Hopefully some of it is a still a good few lifetimes away from reality but then again, driver less cars and ‘smart tech’ was only a pipe dream once upon a time. If I could convince Alexa to cook me a chilli con carne every now and again, I’m pretty sure I’d let it completely rule my life …

Tense, exciting, with brilliant characters and a very though provoking and intriging plot, I loved this. Definitely recommended. This has Netflix special written all over it.

John Marrs is a former journalist from Northamptonshire, England, who spent 25 years interviewing celebrities from the world of television, film and music for national newspapers and magazines.

He wrote for publications including The Guardian’s Guide and Guardian Online; OK! Magazine; Total Film; Empire; Q; GT; The Independent; Star; Reveal; Company; Daily Star and News of the World’s Sunday Magazine. He recently gave up his job to write novels full time.

4 thoughts on “The Minders by John Marrs”