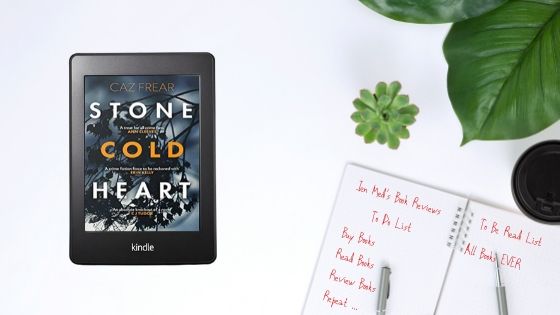 Today I’m sharing my thoughts on book two in the Cat Kinsella series by Caz Frear, Stone Cold Heart. Another one I’ve had on my TBR shelf for far too long but lockdown has given me the chance to remedy that. Here’s what the book is all about:

The twisted and unpredictable new crime thriller from winner of the Richard and Judy Search for a Bestseller competition, perfect for fans of The Innocent Wife.

He told me he was innocent of his girlfriend’s murder.
He told me his wife was out to get him.
What he didn’t tell me was why.

He has a history of cheating.
He attended the party where his girlfriend was murdered.
And so did his wife.

Can I find the truth in the lies?

Book two in Caz Frear’s Cat Kinsella series is another completely absorbing and character driven read that will keep you guessing right to the end of the book. Investigating the murder of a young Australian woman, Naomi Lockhart, Cat and the team of MIT4 are faced with a complex case, one in which they find no end of suspects and a complex and twisted tale of extended families, drugs, jealousy, manipulation and possibly, far far worse. With a lead suspect who couldn’t lie straight in bed and a wife and mother who will do anything other than point the finger of suspicion at her husband , it is up to the team to sort the truth from the lies, a task which takes in them in a surprising direction.

I am loving catching up with this series, if for no other reason than the fact that Cat Kinsella is such a great character. She is far from perfect – a far too complicated childhood and a bad decision in her last case strips that titles away – but she is a good Detective with good instincts, even if sometimes the evidence doesn’t always immediately present itself to back up her theories. Her family skirts both sides of the law creating conflict between Cat and her father, their relationship wrapped in a very uneasy truce, but it makes is believable. The very real and complex feelings Cat has for her Dad make her likeable and is played out perfectly on the page. Contrasting to this, her relationships at work are a joy to read (or listen to) wth mentor Steele and her usual partner in crime fighting, Parnell, proving to be great counters to her impetuous nature. As a team they really work and I love the way the author has developed the dynamic between them, especially Steele’s reactions to Cat’s instincts. She values them but also brings Cat back down to earth with some of her more fanciful thoughts. She’s not dismissive, but she doesn’t over encourage her either, exactly what you’d expect of a superior officer.

The main suspect in this case is a charming and yet arrogant man who has idea’s well above his station. The more I got to know about him, the more i disliked him and again, the author has done a brilliant job in creating a character who seems very plausible and yet has the ability to make your skin crawl and drive you to anger, something that happens all to often in Cat’s case. But he is not the only person with something to hide and the more the team dig, the more uncertainty is cast over his possible guilt. It was certainly a story that kept me guessing, and whilst I had suspicions over who could possibly be guilty of the murder, I certainly didn’t foresee the final reveal.

I loved the way in which Cat’s personal relationship with Aiden was further explored in this book. He is a great character, someone who compliments Cat perfectly, but theirs is not straightforward partnership and the guilt that is inherent in how they met affects the smooth running of their romance, and the events that play out, further complicating Cat’s life. It was an interesting side story and I’m intrigued to see how it plays out, where the author takes us.

This isn’t a series that is full on hard core murders and if that is what you are looking for then it’s probably not the right book for you. What you do find is great, compelling storytelling, in a character driven story where the lines of law and order frequently blur. Definitely recommended.

Caz Frear grew up in Coventry and spent her teenage years dreaming of moving to London and writing a novel. After fulfilling her first dream, it wasn’t until she moved back to Coventry thirteen years later that the writing dream finally came true.

She has a first-class degree in History & Politics, which she’s put to enormous use over the years by working as a waitress, shop assistant, retail merchandiser and, for the past twelve years, a headhunter.

When she’s not agonising over snappy dialogue or incisive prose, she can be found shouting at the TV when Arsenal are playing or holding court in the pub on topics she knows nothing about.

One thought on “Stone Cold Heart by Caz Frear”