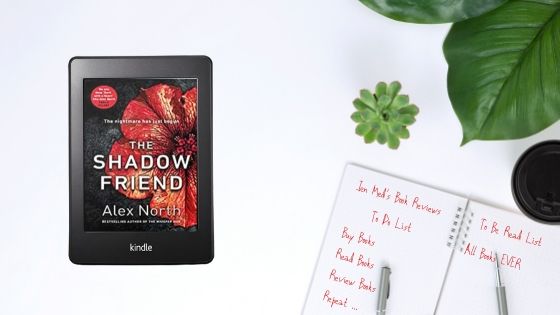 Today I’m sharing my thoughts on The Shadow Friend, the latest novel from Alex North. The Whisper Man was a big hit last summer and so I’ve been looking forward to getting stuck into this one. My thanks to publisher Penguin Michael Joseph for [providing an advance copy of the book for review. Here’s what it’s all about:

The victim was his friend. So was the murderer.

For Paul Adams, it’s a day he’ll never forget. He’s never forgiven himself for his part in what happened to his friend and classmate. He’s never gone back home.

But when his elderly mother has a fall, it’s finally time to stop running.

It’s not long before things start to go wrong. A copycat killer has struck, bringing back painful memories. Paul’s mother insists there’s something in the house.

And someone is following him.

Which reminds him of the most unsettling thing about that awful day twenty-five years ago.

It wasn’t just the murder.

It was the fact that afterwards, Charlie Crabtree was never seen again . . .

Following on from The Whisper Man you’d think I’d know what I was expecting when I picked up an Alex North book. And to an extent, I did. And yet this book still managed to take me by surprise, giving me a story which was suspenseful, creepy and with a hint of the Stephen King’s about it that had me glued to the page.

This is a story which takes place over a dual timeline, of sorts, although the majority of it is set in present day as our protagonist, Paul, returns to his childhood home of Gritten, to visit his dying mother. When he sees her she is in a confused state and eyt her words shock him, bringing down the walls he built to protect himself from a fateful and deadly summer some twenty something years earlier. Alongside this we find Detective Amanda Beck investigating a brutal murder of a teenager by two of his classmates who seem to be reenacting a notorious murder where one of the two suspects disappeared without a trace. When her investigations lead her back to Gritten she finds herself in the middle of dark and deadly battle where the lines between reality and dreams appear to blur.

I loved the way in which the author blends a straightforward murder case with an element of otherworldliness. In this case it is the concept of lucid dreams – the act of being able to get yourself into a state whereby you can control your dream and commit acts, the effect of which will also be felt in the real world. What starts as a harmless and yet twisted game between a group of teenage boys soon seems to take on a life of it’s own and the way in which the author depicts the manipulation and coercion of the group by one character in particular is sinister and yet believable. But it is the small tokens – the bloody handprints, the effigy dolls – which all build into the idea of the superstition – Mr Red Hands – and set you on edge with a kind of skin crawling tension.

As grotesque as the idea of the murder is, and we are spared most of the gory details, it is not that which really creates that undercurrent of unease. It is that prickling sensation of being watched. The setting of the dying town that feeds into the atmospheric nature of the story. The dark, dense, shadowy woods which lie at the edge of the town like a half remembered dream lingers the periphery of the conscious mind. And there is that very real feeling of unfinished business between Paul and the town that makes you sit up and take notice, perhaps gets the heartbeat pulsing that little bit faster, and makes you fidget that little bit closer to the edge of your seat.

Whilst this is a more thoughtful, suspenseful read, it is not without its moments of tension and shock. There are scenes towards the end in which the pace picks up dramatically, a showdown in which the full truth of what has happened is revealed. And prepare to be shocked as while I was certain. I had a handle on what was what, it really wasn’t that at all. The author managed to keep me guessing right to the end. The clues were all there but in being absorbed and distracted by the past I literally couldn’t see the wood for the trees. And the shadows. What happens in Gritten all those years ago is like an earthquake where the aftershocks are being felt for years to come. The author captures the psychological impact of that summer on all fo the key players perfectly, using the story like a mirror to reflect back at the reader until we feel every moment of fear and doubt too.

Creeping, suspenseful and full of mystery, this is going to completely satisfy fans of The Whisper Man and is definitely recommended.

Alex North was born in Leeds, where he now lives with his wife and son. He studied Philosophy at Leeds University, and prior to becoming a writer he worked there in their sociology department.

5 thoughts on “The Shadow Friend by Alex North”