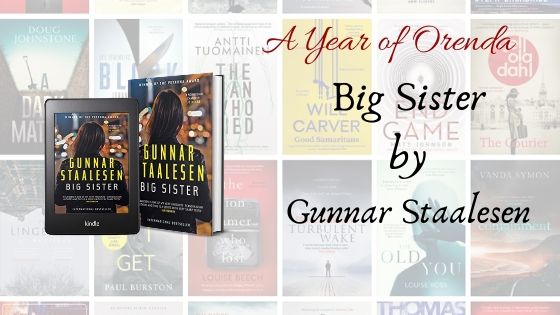 Now this book wasn’t what I was expecting and I think the new case that Varg Veum finds himself with probably wasn’t quite what he was expecting either! Varg Veum week continues with a look back at my review of Big Sister by Gunnar Staalesen. Here’s what it’s all about:

Varg Veum receives a surprise visit in his office. A woman introduces herself as his half-sister, and she has a job for him. Her god-daughter, a 19-year-old trainee nurse from Haugesund, moved from her bedsit in Bergen two weeks ago. Since then no one has heard anything from her. She didn’t leave an address. She doesn’t answer her phone. And the police refuse to take her case seriously.

Veum’s investigation uncovers a series of carefully covered-up crimes and pent-up hatreds, and the trail leads to a gang of extreme bikers on the hunt for a group of people whose dark deeds are hidden by the anonymity of the Internet. And then things get personal…

I first became aware of Gunnar Staalesen and Varg Veum when I was offered the chance to review Wolves in the Dark. Despite a very dark storyline and Veum being accused of some very objectionable things, he was a character I grew to like very much and very quickly. When I saw this latest book was due for release I banged in my pre-order without hesitation and, having devoured the book in less than a day, I made a very wise choice.

As you can read from the extract, the story sees out hero being visited by his estranged half sister, Norma. She is not seeking him out for a family reunion, rather to request his services as a Private Investigator to locate her god-daughter, Emma, who has not been seen in weeks having left her former residence in Bergen in somewhat of a hurry. This is a very difficult case for Veum, not least because during his investigations he learns some uncomfortable facts about his own family, but also because, somehow, Emma has vanished without a trace. Similarly to Veum and Norma, Emma’s childhood was a difficult one but could this and her estranged father hold the key to her disappearance?

As investigations go, missing persons cases are often the hardest to crack and potentially the slowest in terms of action. This would seem to be the case in this book as Veum finds it hard to get witnesses to be honest with him and the more he looks into the case, the more secrets he uncovers and the further from a resolution he appears to be. Yet this is not how it feels when you are reading. For me, inspite of the lack of progress, the plot moved along at a rapid pace and there always seemed to be something happening and some truth lying partially buried with just enough by way of tantilising clues on show to keep the reader hooked.

There are moments of high tension and drama in this book, sections where you can cut the atmosphere with a knife, where Veum is in deep jeopardy with no clear indicator as to how he may over come it. This is where Staalesen’s true skill lies. In creating an absolute sense of peril without actually having to resort to any great moments of violence on the page. He creates such an idea of setting, such perfect pacing in his prose, that it is not necessary. Just those small inflections, the tiny elements of emotion or feeling that he injects into the narrative which create the pulse quickening tension. And the sense of place, the descriptions of setting, are just about perfect, making it so easy to picture the scene as you read.

Now there are some difficult topics touched upon in this story, not in any gratuitous way, but it does reference sexual assualt and other sensitive subjects. Those are the hard moments to read, where you can feel the emotion behind the words, with just enough detail to paint the picture necessary to move the story onward. And while you may be able to guess where the investigation is leading, there is still enough in here to surprise and outwit the reader. Things are not as straight forward as they may at first appear, believe me.

This is another brilliant read, full of the atmosphere that I loved about the last book, an honest look at complicated family situations and the impact that they can have upon those at the heart of the story.

One of the fathers of the Nordic Noir genre, Gunnar Staalesen was born in Bergen, Norway in 1947. He made his debut at the age of twenty-two with Seasons of Innocence and in 1977 he published the first book in the Varg Veum series. He is the author of over twenty-three titles, which have been published in twenty-six countries and sold over five million copies. Twelve film adaptations of his Varg Veum crime novels have appeared since 2007, starring the popular Norwegian actor Trond Epsen Seim, and a further series is currently being filmed. Staalesen, who has won three Golden Pistols (including the Prize of Honour) and the Petrona Award, and been shortlisted for the CWA Dagger, lives in Bergen with his wife.