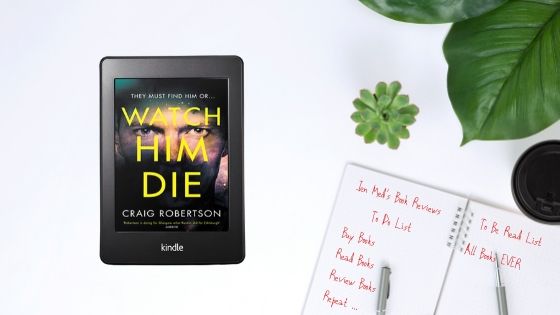 Today it is my pleasure to be sharing my thoughts on Watch Him Die by Craig Robertson, the latest book in the Narey and Winter series. Set across two continents and two cities, Los Angeles and Glasgow, this is one heck of a ticking clock thriller that will have you on the edge of your seat. My thanks to publisher Simon & Schuster UK for letting me have the early copy for review. Here’s what the book is all about:

ONLY ONE PERSON CAN SAVE YOU. AND HE WANTS YOU DEAD.

The LAPD find a man dead at home. Nothing suggests foul-play but elements of the victim’s house show that something is deeply wrong.

Meanwhile, in Glasgow, DI Rachel Narey is searching for a missing young woman – and the man she suspects of killing her.

When a feed broadcasting the slow and painful death of a final victim is discovered, these two cases become linked.

There’s no way to identify him.
No way to find him
No way to save him.
Not without the cooperation of a killer.

And the only way he will cooperate is if he can watch him die.

The gripping new novel from the acclaimed author of Murderabilia and The Photographer, both nominated for the McIlvanney Prize.

Okay – so while this is part of the Narey and Winter series, it’s safe to say that this story really belongs to Rachel Narey. The focus is largely on her and an investigation that she finds herself caught up in. That;s not so to say that Winter does not play an important part in the story, and some would argue the most important part given that he is predominantly at home looking after their child, but it is a seemingly minor narrative point, rather than a full on involvement in the investigation. Of course this only applies to the part of the story set in Glasgow as there is a concurrent storyline, one which feeds into Rachel’s case in a rather disturbing way, and in which we meet LAPD Detectives Bryan Salgado and Cally O’Neill.

I love how these two stories intersect. In one we are faced with a search for a missing woman, in the other it is a search of another kind. The search for a young man who is both missing and yet ‘in plain sight …’ It is the series of little discoveries that occur after the Detectives are called of an apparent scene of death by natural causes, some morbidly fascinating, others that can only be described as grotesque, that really drew me into the story. With a nod to some of the most notorious real-life crimes that have occured in the US, this. was a book that absolutely had me hooked from the very beginning and kept me glued to the pages right to the very end.

This is kind of a ticking-clock mystery that really keeps you on edge. There is an overwhelming sense of edginess from the start, that absolute creep factor that comes from the moment the first body (natural death guy) is discovered. It is so hard to talk about why without giving too much away but it is safe to say that this guy is a collector with an unnatural obsession for serial killers and cult true-crime figures, with a hobby which may or may not have appeared in one of Craig Robertson’s earlier titles … His obsession leads him to making a kind of pact, one with very dark and murderous consequences. From the initial discovery, and the subsequent search of the dead man’s home, comes a sense of urgency one that is exacerbated as the full extent of the case becomes clear. From here there is a real race against time in an investigation which brings our two LA heroes right to the door of DI Rachel Narey. It becomes less locked room mystery (the manner of impending death is all too clear and available to the Detectives in glorious technicolor) but definitely a hidden room mystery as they strive to find not only the who but the where.

This is not a warm and cosy read, some of what happens certainly makes for the odd grimace, with a more than generous ewww factor. But I loved the way in which the author blends crime fact with crime fiction, using one of the the most infamous unsolved cases of the past hundred years as a backdrop for this investigation. Keen fans of true crime will spot the links pretty quickly, those of a curious but less well read nature, will be able to look the relevant cases up on line. It makes for sombre reading. None of the cases are glamourized here, it’s not that kind of book, but it does bring into question the psychology of a serial killer, a subject which clearly fascinates the author and is used to thrilling effect here. It is a question as to whether true evil exists and whether killers are made or born. Read the book and then you decide.

It is so hard to convey all the things I absolutely loved about this book without giving too much of the plot away so I will say this. Considering that over half of the book features new characters, taking the focus away from our favourite Narey/Winter combo, I was drawn in in immediately. I liked Salgado and O’Neill, liked their contrasting but complimentary characteristics. They felt real to me very quickly and I was more than content in their company. The story set me in mind of the movie Untraceable a little, only instead of appealing to the macabre tendencies of the world wide web, these murders had a very select audience. The nod to real life crimes, using both setting and circumstance to inform the story made me both horrified and satisfied in equal measure and added a layer of authenticity to the story. Basically it really just worked perfectly for me on every single level.

Which is why I have to give it one of these.

My red hot reads badge. I read this book in one afternoon, finding myself absolutely glued to the story until I turned the very last page (or clicked – it was on an e-reader don’t you know). As I felt the tension rising, the final moments until the story reached its oh so dramatic conclusion making me sit up straight, and even start leaning forward, in my chair, I could feel the smile on my face growing wider. There are so many little touches – the snappy chapters, the spot on dialogue, the use of little cutaway scenes in which it is clear that the killer is lining up their next victim – that keep you right on the edge of that last nerve that you won’t want to walk away. It is almost a relief to have the one final moment of calm, a breather to let you come down after an increasingly nerve-wracking story. A very satisfying conclusion.

Now this may have been a while in the making, but no need to apologise Mr Robertson. It was absolutely worth the wait.

A former journalist, Craig Robertson had a 20-year career with a Scottish Sunday newspaper before becoming a full-time author. He interviewed three Prime Ministers, reported on major stories including 9/11, Dunblane, the Omagh bombing and the disappearance of Madeleine McCann. He was pilloried on breakfast television, beat Oprah Winfrey to a major scoop, spent time on Death Row in the USA and dispensed polio drops in the backstreets of India.

He now shares his time between Scotland and California and can usually be found on a plane somewhere over the Atlantic.

One thought on “Watch Him Die by Craig Robertson”