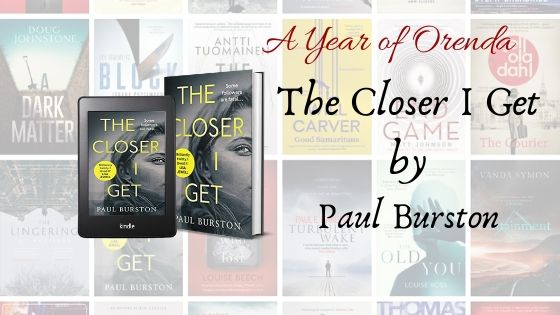 Today I hand the blog back to Mandie who is sharing her thoughts on Paul Burston’s The Closer I Get. This was one of my top three books of 2019 and if you wan to know why, my review can be found here. Read on to find out what the book is all about.

Tom is a successful author, but he’s struggling to finish his novel. His main distraction is an online admirer, Evie, who simply won’t leave him alone.

Evie is smart, well read and unstable; she lives with her father and her social-media friendships are not only her escape, but everything she has.

When she’s hit with a restraining order, her world is turned upside down, and Tom is free to live his life again, to concentrate on writing.

But things aren’t really adding up. For Tom is distracted but also addicted to his online relationships, and when they take a darker, more menacing turn, he feels powerless to change things. Because maybe he needs Evie more than he’s letting on.

A compulsive, disturbingly relevant, twisty and powerful psychological thriller, The Closer I Get is also a searing commentary on the fragility and insincerity of online relationships, and the danger that can lurk just one ‘like’ away…

Working from home has given me the chance to start listening to some of the audio books that I have purchased, removing some of the quiet of working alone and I certainly picked a good one with The Closer I Get as somehow hearing the story from the different perspectives made it just that little bit more real. The fact that this book was born out of the author’s own experiences should not be taken lightly either.

Tom is an author who like many, has attended events and spoken to his readers, happy that they liked his work and hoping that they will continue to buy future books. Evie is one such fan who takes the love of his work just a little too far to the point of obsession.

On the surface Evie seems like a normal, rational person and in her eyes, she has done nothing wrong. As the book progresses though you get to see a different side to her personality that is anything but normal. Even her own father does not seem sure of her innocence. Tom is at first embarrassed by what is happening to him and doesn’t want to cause a fuss but as things escalate, he does feel that he has not option but to report what is happening to the police. That being said, I am not sure that personally I trust the account of what happened from either of them. Tom is clearly a victim of online stalking but he is also a bit of an arrogant arse so you do not always have the sympathy for him that you think you should.

The ending was not quite what I expected but I think throughout the book I was given little surprises that made me rethink what I thought I knew. This is certainly a book that may hit a nerve. After all we spend most of our time on social media, connecting with people that we vaguely know, presenting a version of ourselves that may or may not be the full story. Paul Burston has taken stalking to the extreme in The Closer I Get but when does an interest in a person and what they do become more that that?

Thankfully for anyone I follow on Facebook, Twitter or Instagram it is not an issue as I am a lazy social media user. If I see something when I go on there I may or may not read, like or comment on it, I just don’t have the inclination to hunt out any one specific person to see what they are up to that day, but it can be addictive for some. This is one book that may just make you rethink how you interact with others in the future.

Enter below for your chance to win a signed copy of The Closer I Get by Paul Burston. We have one limited edition hard back and one paperback to give away. Entries open to UK & Europe only. The draw closes at midnight on 14th June, 2020.

Paul Burston is the author of five novels and the editor of two short story collections. His most recent novel The Black Path, was a WHSmith bestseller. His first novel, Shameless, was shortlisted for the State of Britain Award. His third novel, Lovers & Losers was shortlisted for a Stonewall Award. His fourth, The Gay Divorcee, was optioned for television. He was a founding editor of Attitude magazine and has written for many publications including Guardian, Independent, Time Out, The Times and Sunday Times. In March 2016, he was featured in the British Council’s #FiveFilms4Freedom Global List 2016, celebrating “33 visionary people who are promoting freedom, equality and LGBT rights around the world”. He is the founder and host of London’s award-winning LGBT+ literary salon Polari and founder and chair of The Polari First Book Prize for new writing and the newly announced Polari Prize.