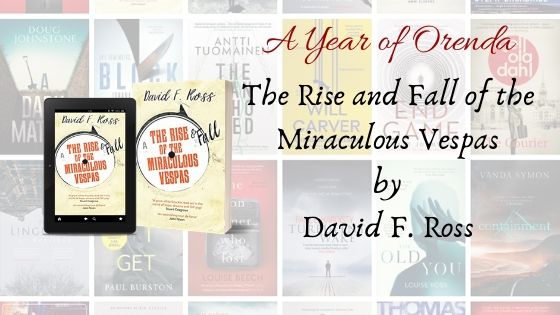 It is my absolute pleasure to be finally getting to book two in David F. Ross’s fabulous Disco Days series, The Rise and Fall of the Miraculous Vespas. I am truly a very lucky reader as last year David sent me a signed copy of the book, along with a limited edition Vespa’s record that has pride of place amongst my Orenda collection. Before we hear what I thought of the book, here’s what the it is all about:

The Rise and Fall of the Miraculous Vespas is the timeless story of the quest for pop immortality. When a young Ayrshire band miraculously hits the big time with the smash hit record of 1984, international stardom beckons. That’s despite having a delusional teenage manager propelled by a dark, malign voice in his head…

Can Max Mojo’s band of talented social misfits repeat the success and pay back the mounting debts accrued from an increasingly agitated cartel of local gangsters? Or will they have to kidnap Boy George and hope for the best?

Featuring much-loved characters from the international bestseller, The Last Days of Disco, this is an absurdly funny, riotously ambitious and deeply human story of small-town rivalries, music, confused adolescence and, above all, hope, from one of Scotland’s finest new voices.

Oh I am loving this series. It is full of nostalgia (although clearly I am slightly too young to remember all of the bands and current affairs referenced in the book 😳), humour, a bit of drama, a few, ewww moments and a lot of swearing and boy is it fun.

Events in The Rise and Fall of the Miraculous Vespas pick up, more or less, where The Last Days of Disco leaves off, maybe part way through, and whilst there are many recurring characters, particularly amongst KIlmarnock’s underworld, it is not really a sequel. In this story we are following the fortunes of Dale Wishart, former front man of The Miraculous Vespas, who, how should I put this, runs into a little trouble during a gig in book one which leads to a rather dramatic change in both character and ambition. Having sustained a brain injury, Dale reinvents himself as Max Mojo, wannabe music Manager whose only aim is to reform the Vespas and take them to the point of super stardom. Alongside this his father, ‘Washer’ Wishart is on the brink of a turf war with a Glasgow based crew that could shatter the peaceful co-existence that he and the other Crew Bosses have managed thus far. With Fat Franny Duncan torn between the desire to keep his criminal empire alive and the pull of a life on the straight and narrow, the scene is set for a very interesting few months for Kilmarnock’s underworld.

What I love about this series are the really colourful characters that inhabit the pages. From the mad, both literally and figuratively, world of Max Mojo, through to the more criminal elements of the story, you have such a varied and lifelike group that you can’t help but become vested in their futures, even those who operate on the wrong side of the law. The story begins with Max Mojo being interviewed about a Vespas reunion, some years after the brief period in which they enjoyed any kind of commercial success. David F. Ross then leads readers on a journey from the very start of Max’s fledgling career, through the turbulent times that followed, right through to the point at which it all begins to fall apart.

Max is a wonderful character, absolutely crazy, largely driven by the brain injury and the. subsequent medication, but the many internal battles he fought were both humorous and believable. The author had done a brilliant job in ensuring he sits just the right side of becoming a caricature, whilst invoking sympathy to his plight on a mental health perspective. His hyperactivity drives the story, the comedy elements being laughing as much with as at him.

Then you have the new lead singer, Grant Delgado, whose on father played a significant part in the previous book, who is only just discovering not only a love for music, but a natural talent for it too. Watching him navigate a relationship with the band’s drummer, Maggie, was kind of endearing as was watching him mature a the story progresses. The other members of the band, Simon and Eddie Sylvester, come with their own share of issues, one agoraphobic and the other a kleptomaniac. It certainly makes for an interesting dynamic amongst the group, one which means you’re never quite sure what to expect when they head off to another gig. Many of their scenes made me smile, but whilst this is a book about their rise to fame, it also isn’t entirely about that.

It was interesting seeing another side to Fat Franny Duncan this time around. To be fair in the last book he came across as a bit of a tit. This time around I actually found that I felt some empathy for him. He is struggling personally, both with issues in his romantic life and with his mother, in the advance stages of dementia, and it is Fat Franny whose story elicited the most emotion this time around. Perhaps not in the way that the previous book touched me, but it is hard not to feel something for the world weary mobster.

One of the great things about these books is that they are filled with action but not necessarily in a way that tries to take itself too seriously. With very memorable settings and a socio-political element that doesn’t dominate but does brilliantly reflect the early eighties in which the books are set, they really are something that anyone who lived through the time can identify with, even if you were only a nipper like I was. They have a wonderful thread of dark humour, moments that will make you laugh even though you know you shouldn’t, and are a kind of release from the world of political correctness. It wouldn’t be possible to truly write about the eighties in a style that wasn’t even slightly tinged with offence, but again the author stays just the right side of the line whilst highlighting just how thoroughly inappropriate life was back then in ‘the good old days’.

These are books to be savoured. Books that recreate that particular era in a mix of rich imagery, evocative language and musical nostalgia that will have you both cringing and laughing out loud. With an abundant use of the vernacular, you may have to concentrate if, like me, you are not native to the area, but it does add that real sense of truth to the story, as fantastical as the whole thing may appear. If you can read your way through this and not become invested in the fates of Max, Grant, Fat Franny and Washer then you’re a hard reader to please because I’m loving it.

David F. Ross was born in Glasgow in 1964 and has lived in Kilmarnock for over thirty years. He is a graduate of the Mackintosh School of Architecture at Glasgow School of Art, an architect by day, and a hilarious social media commentator, author and enabler by night. His most prized possession is a signed Joe Strummer LP. Since the publication of his debut novel The Last Days of Disco, he’s become something of a media celebrity in Scotland, with a signed copy of his book going for £500 at auction, and the German edition has not left the bestseller list since it was published.

One thought on “A Year of Orenda – The Rise and Fall of the Miraculous Vespas by David F. Ross”