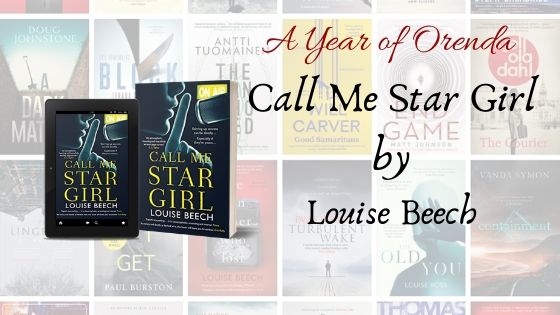 Back to Mandie and this time she has a review of Louise Beech’s first fully fledged crime novel, the award winning Call me Star Girl. If you’d like to know what I thoughts about the book you can find my review here. If you are more interested in what Mandie thought then read on for her review, as well as more information about this chilling and tension filled read.

Stirring up secrets can be deadly … especially if they’re yours…

Pregnant Victoria Valbon was brutally murdered in an alley three weeks ago – and her killer hasn’t been caught.

Tonight is Stella McKeever’s final radio show. The theme is secrets. You tell her yours, and she’ll share some of hers.

What Stella really wants to know is more about the mysterious man calling the station … who says he knows who killed Victoria, and has proof.

Tonight is the night for secrets, and Stella wants to know everything…

With echoes of the Play Misty for Me, Call Me Star Girl is a taut, emotive and all-consuming psychological thriller that plays on our deepest fears, providing a stark reminder that stirring up dark secrets from the past can be deadly…

Once again Louise Beech has redefined her writing genre with Call Me Star Girl and, as a reader, I have to say I find this both exciting and refreshing as there is no chance you can get comfy with what you think you will find as you turn the pages of the book. This time Louise has dipped her toe into crime fiction with resounding success.

Stella McKeever is presenting her last radio show and decides to make it all about secrets. Its not her usual format but she has her reasons for this. The night is certainly an eye opener for her as she learns things that I think even she wasn’t expecting. With the murder of Victoria Valbon puzzling everyone she has been getting calls from a mysterious man claiming to know what happened that night which has certainly piqued her interest. She is not totally convinced that he isn’t just some crackpot trying to get his 15 minutes of fame, so decides to call his bluff.

Call Me Star Girl isn’t just about Stella finding out about Victoria’s murder, it is more about Stella, and the reader, finding out about herself. With the story being told from the viewpoint of both Stella and her mother Elizabeth, and set in both the past and the present, I will admit that it took me a little time to find my stride with the story but, as always, Louise’s writing style drew me in and kept me interested. Through these chapters we discover the fractured relationship between mother and daughter and how they have only recently reconnected. It is this that has also moulded Stella’s relationship with her boyfriend Tom. I am not going to lie, I was not a big fan of Tom, I can’t quite put my finger on exactly why but some of his actions were a little bit creepy and even at the end of the book I had very little sympathy for him.

The tension and the clues build up throughout the book to a conclusion that I was not totally expecting. With the scenes in the radio station where Stella is often alone, with her mind playing tricks on her and every noise making her jumpy, it takes it just that little bit further. Call Me Star Girl looks deep into relationships and the secrets we keep and will have you wondering just how far would you be prepared to go for your loved ones that’s for sure.