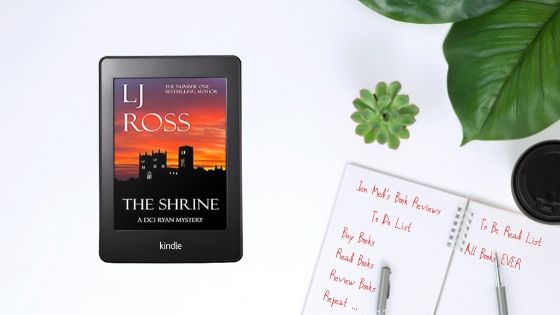 Today it is my absolute pleasure to be sharing my thoughts on The Shrine, the latest instalment of the DCI Ryan series by L.J. Ross. I love this series and like all Ryan fans, always eagerly await the next book and preorder as soon as I can. So was the book as good as I hoped it would be? Well, here’s what it’s all about:

A murder for the history books…

After a long and eventful winter, DCI Ryan and his team are looking forward to the joys of spring. But, when one of their colleagues is shot dead on her own doorstep and the brass think it’s an inside job, Ryan finds himself drafted in to investigate.

He’s barely scratched the surface when reports flood in of a terror explosion at Durham Cathedral. Chaos descends on the sleepy, historic city and, when the smoke clears, they find a priceless artefact that once belonged to Saint Cuthbert is missing.

With tensions running at an all-time high, unable to trust the local police, can Ryan and his team bring a killer to justice — and restore Cuthbert’s cross to its natural resting place?

Murder and mystery are peppered with romance and humour in this fast-paced crime whodunnit set amidst the spectacular landscape of County Durham.

Before we start, let’s just clear a few things up. If you are here hoping to find a book that is really gritty, hard core, laced with explicit scenes of violence, bad language, murder and mayhem, well you’ve come to the wrong place. There are plenty of brilliant books and authors that can give you that but that’s not what this series is about. If you are looking for the best of modern day crime writing, tales that draw on character, setting and the story itself to build an experience that is as full of heart and love as it is mystery and tension, then this is the series for you. Still with me? Good. Then let’s carry on.

This book is classic DCI Ryan reading. We are treated to a very dramatic opening scene, in which an attack on Durham Cathedral sees one of our favourite team placed in great jeopardy. Follow this up with a very cold blooded murder, a seemingly professional hit, and we find ourselves with two serious crimes that have personal meaning to the team. In this book it is a case of dividing to conquer, with Ryan leading half of the team to investigate the murder, whilst MacKenzie takes over investigating the attack on the Cathedral. I’ll say no more than that about the story. It’s your job to uncover the rest.

Now the book has all the hallmarks of a Ryan novel. You have the blend of the mystery, the slow unravelling of the investigation, the discovery of vital clues and the sense of some underlying backstory or subplot that is just out of reach and which may, or may not, present itself by the conclusion of the book. There is the clear passion for the setting, in this case predominantly around County Durham, and the exploration of the region’s rich history, that sets the story apart and intrigues me as a reader. You also have the brilliant characters that the author has so lovingly developed over the series, cementing them in the hearts and minds of readers worldwide. It was lovely to see Yates playing a larger role in this story, the course of the investigation allowing her to showcase the skills that we knew she possessed. the book does delve deeply into the emotional connections between the team, as couples and as an extended family, and has that romantic and positive air that permeates all of the series. Speaking of family, we finally get to meet Ryan’s parents. Ryan and his father share many traits, including the stoicism, and I am looking forward to seeing how their difficult relationship is developed and tested in future books.

The book itself is quite a quick read, and after an emotional beginning, the investigation picks up pace with clues coming thick and fast. This is not a book that draws out the tension, or the investigation, unnecessarily. It is as much about the impact upon the characters as it is the cases in themselves. There are elements of the tale which draw readers back to earlier books in the series, moments where the characters pause to reflect over events that have shaped their lives so far and, in that respect, this serves as a perfect segue way into what look sets to be another exciting period in Ryan’s life. Yep. Sorry all. If you want a nice neat conclusion to the story, you won’t find that here either. Well – you do to a degree ins as much as you know the what, the how and even, mostly, the who. But there is also a very clear and yet unspoken ‘to be continued’ vibe at the end. Looks like there is a new villain in town, folks. That has me very excited.

Definitely recommended for fans of the series.

3 thoughts on “The Shrine by LJ Ross”