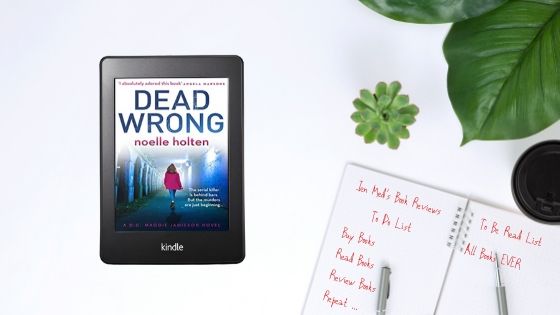 Today I’m delighted to join the blog tour to celebrate the paperback release of Dead Wrong, book two in the DC Maggie Jamieson series by Noelle Holten. My thanks to Sarah Hardy of Book On The Bright Side Publicity and to publishers One More Chapter for inviting me to join the tour. Here’s what the book is all about:

The serial killer is behind bars. But the murders are just beginning…

DC Maggie Jamieson’s past comes back to haunt her in this dark and gripping serial killer thriller.

They were abducted years ago. Notorious serial killer Bill Raven admitted to killing them and was sentenced to life.

But now one of them has been found, dismembered and dumped in a bin bag in town.

Forensics reveal that she died just two days ago, when Raven was behind bars, so Maggie has a second killer to find.

Because even if the other missing women are still alive, one thing’s for certain: they don’t have long left to live…

Although this is billed as book two in the Maggie Jamieson series, it’s probably right to say that this is the first time that this is truly Maggie’s story as book one really belonged to Lucy. And what a story it is, as Maggie is faced with the reopening of possibly the biggest case in her career, that of serial killer Bill Raven. All the evidence had pointed to Raven being a merciless killer, he even confessed, but when one of the alleged victims’ bodies turns up, everything that Maggie thought she knew is thrown into disarray. Did Raven have an accomplice or has Maggie got everything horribly, horribly wrong?

Well … you’re going to have to read to find out, aren’t you? And why wouldn’t you? This is yet another assured and tense bit of writing from the author, one which balances the point of view of Maggie and the investigative team against the point of view of Raven’s ‘victims’. Scenes move seamlessly between the two, the tension rising and falling as you read. The moments when we are faced with the perspective of the abducted women is quite chilling. It is clear they are all being kept alive, but only barely, and the way in which you are presented with the first hand account of their treatment will send tremors down your spine. But aside from the first body, it is hard to know initially if they are Raven’s ‘victims’ or women newly abducted. You think you know, but you do need to navigate the tension filled passages in order to understand the depths of depravity of this particular nemesis.

I like the character of Maggie Jamieson. She is a very strong person, determined, if a little likely to go off on her own a touch too much and to circumvent procedure, especially when she believes it is holding her back and allowing the bad guys to get away with murder. She has a real fight in her, as well as a clearly defined stubborn streak, but also an innate ability as a Detective that makes her a pleasure to read about. Her friendship with her newly appointed acting DS, Nathan Wright, is well developed and although you get the feeling that, deep down, Maggie could run rings around Nathan, it works well and is probably the right dynamic for the series right now to allow Maggie the freedom to do what she needs to do.

One other friendship which was fun to see develop was between Maggie and the Forensic Psychologist, Kate Moloney. There is a real spark between the two of them and I’m curious to see how that develops over the coming books. For now though, Kate has her own worries and again this adds quite a dark element to an already troubling storyline. I won’t spoil it here, but suffice to say that it was fantastically creepy and led to a killer finale that means you will absolutely have to read the next instalment.

The author uses her knowledge of the justice system to great effect in the book, making the scenes both within the investigation and at the prison with Bill Raven feel very authentic. You could feel the casual menace emanating from Raven, almost experience the way in which he was getting under Maggie’s skin, and he is someone who really gets under your skin at that. As nemeses go, he has the all the hallmarks of a classic – the dangerous combination of brains and charm with an overwhelming propensity for darkness. He isn’t by any means the only suspect in this book, and whilst doubt is cast over his guilt in this particular case, there is no doubt that he is harbouring some kind of secret.

This was another great and tense instalment in the series and I’m intrigued to see what comes next. It certainly promises to be more edge of the seat stuff. I can’t wait.

Noelle Holten is an award-winning blogger at http://www.crimebookjunkie.co.uk. She is the PR & Social Media Manager for Bookouture, a leading digital publisher in the UK, and was a regular reviewer on the Two Crime Writers and a Microphone podcast. Noelle worked as a Senior Probation Officer for eighteen years, covering a variety of cases including those involving serious domestic abuse. She has three Hons BA’s – Philosophy, Sociology (Crime & Deviance) and Community Justice – and a Masters in Criminology. Noelle’s hobbies include reading, author-stalking and sharing the book love via her blog.

Dead Inside is her debut novel with One More Chapter/Harper Collins UK and the start of a new series featuring DC Maggie Jamieson.