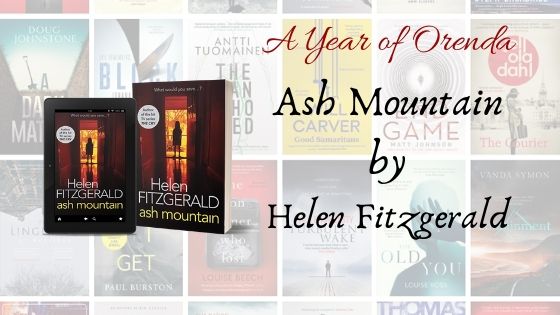 Today it is my great pleasure to continue our Year of Orenda feature with a review of the stunning Ash Mountain by Helen Fitzgerald. Packed with dark humour and a heart wrenching storyline, this book is going to be another big hit that is screaming out for a TV adaptation. Thanks to Anne Cater for inviting me to join the tour. Here’s what it’s all about.

Single-mother Fran returns to her sleepy hometown to care for her dying father when a devastating bush fire breaks out. A heartbreaking disaster-noir thriller from the bestselling author of The Cry.

Fran hates her hometown, and she thought she’d escaped. But her father is ill, and needs care. Her relationship is over, and she hates her dead-end job in the city, anyway.

She returns home to nurse her dying father, her distant teenage daughter in tow for the weekends. There, in the sleepy town of Ash Mountain, childhood memories prick at her fragile self-esteem, she falls in love for the first time, and her demanding dad tests her patience, all in the unbearable heat of an Australian summer. As past friendships and rivalries are renewed, and new ones forged, Fran’s tumultuous home life is the least of her worries, when old crimes rear their heads and a devastating bushfire ravages the town and all of its inhabitants…

Simultaneously a warm, darkly funny portrait of small-town life – and a woman and a land in crisis – and a shocking and truly distressing account of a catastrophic event that changes things forever, Ash Mountain is a heart-breaking slice of domestic noir, and a disturbing disaster thriller that you will never forget…

Sometimes I feel like I have to write a review straight away as I am just so emotional I have to get my words straight on the page. Other times I am absolutely lost for words and almost scared of writing a review, so I put it off, and put it off, and put it off, as whatever I say it won’t be right. Ash Mountain is both one of the first and one of the latter. Mostly of the latter as it is such a very difficult novel to put into words for many different reasons.

This book has the perfect blend of story, drama, great and diverse characters, tragedy and comedy. It is everything you are looking for in a read but also not really enough – only because it was just over too soon. Set against the backdrop of a devastating bushfire this is story of family, friendships and ultimately loss all taking place over a matter of days. It is amazing really, the speed at which we get to know, like and be devastated by the changes to the lives of that characters that Helen Fitzgerald has created here.

Fran is a remarkable character. She is prickly, resentful of the way in which her life has played out, especially the fact that she has been drawn back to her family home, but with an unquestionable love for her family, especially her children. I love the way in which Helen Fitzgerald is able to create characters you can easily relate to, but who will frustrate and amuze you in equal measure. Fran is not amusing to the same level as Mary in Worst Case Scenario, but there is something about her droll outlook on life and her will she/won’t she attitude when it comes to the idea of having a relationship with her childhood friend and neighbour ‘The Captain’. This isn’t helped by the growing relationship between their two daughters but still … It’s like watching teenagers trying to play it cool. Trying too hard as it turns out.

Now the book starts at the outset of a severe bushfire which is threatening the town, and ends the same way. Between first chapter and last we are taken back in time to the days leading up to this fateful event, to all the changes that happen in Fran’s life in just ten days, as well as the events which ultimately changed her life forever and made her so resentful of the town and the memories it held for her. As it turns out, being back home with her father will lead to revelations that Fran had put from her mind, things that will have drastic repercussions for many people as the story moves on.

There are so many elements that had me moving from shocked to outraged to absolutely devastated, that I was a pretty emotional wreck by the end of the story. While there is still a feeling of hope in the story, there is a real sense of loss too. The scenes towards the end of the book, where the town is in the grips of the fire are quite intense. That building sense of inevitable tragedy that I found myself willing it to end in anyway other than what I was ultimately expecting, but knowing that it couldn’t be so. The very calm and yet affecting way in which events unfold, as one family and then another slowly succumbs to the fire, is somehow packed with intensity of the situation, and you can hear the crackle of the fire, feel the impact of the blistering heat with every word you absorb. It is hard to read at times, thinking about the loss of life, of wildlife ( and I should pause here to say RIP Ronnie Corbett) but I felt completely compelled to carry on, even if I found myself with a wry smile at times to accompany the tears.

This is a truly powerful read, one packed with a myriad of emotions and one that will take some time to forget. So yes – I put off writing the review as I knew I didn’t need to capture my emotions straight off the bat. I can still picture it now, still recall those final telephone calls, the slow understanding by each character of what was happening. The emotional and physical toll of such tragic loss is as stark and deep now as it was when I read the book a few weeks ago, and it can still bring a tear to my eye. It is one of those kinds of reads.

Bravo Ms Fitzgerald. This book could not be further from Worst Case Scenario and yet it is another one that is on my absolute recommended reads list and one I know I will remember for a very long time.

And it’s getting one of these.

Helen FitzGerald is the bestselling author of ten adult and young adult thrillers, including The Donor (2011) and The Cry (2013), which was longlisted for the Theakstons Old Peculier Crime Novel of the Year, and is now a major drama for BBC1. Helen worked as a criminal justice social worker for over fifteen years. She grew up in Victoria, Australia. She now lives in Glasgow with her husband.