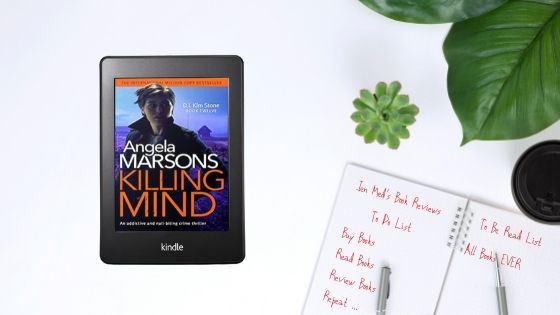 Today I am delighted to share my thoughts on the latest Kim Stone novel from Angela Marsons, Killing Mind. It’s always a treat when a new Kim Stone book is on the horizon. It’s one of my favourite series and this was another absolutely brilliant instalment. Thanks to Kim Nash of Bookouture for inviting me to take part in this blog tour. Here’s what the book’s all about:

It had seemed so simple. Get in, get the information, get out. But now they were getting inside her mind and she didn’t know how to stop them…

When Detective Kim Stone is called to the home of Samantha Brown, she finds the young woman lying in bed with her throat cut and a knife in her hand. With no sign of forced entry or struggle, Kim rules her death a tragic suicide.

But a visit to Samantha’s parents rings alarm bells for Kim – there’s something they’re not telling her. And, when she spots a clue in a photograph, Kim realises she’s made a huge mistake. Samantha didn’t take her own life, she was murdered.

Then a young man’s body is found in a local lake with his throat cut and Kim makes a link between the victim and Samantha. They both spent time at Unity Farm, a retreat for people seeking an alternative way of life.

Beneath the retreat’s cosy façade, Kim and her team uncover a sinister community preying on the emotionally vulnerable.

Sending one of her own undercover into Unity Farm is high risk but it’s Kim’s only hope if she is to catch a killer – someone Kim is convinced the victims knew and trusted.

With Bryant distracted by the emergence of a harrowing case close to his heart, and an undercover officer in way over her head, Kim’s neck is on the line like never before. Can she protect those closest to her before another life is taken?

An unbelievably gripping crime thriller from multi-million copy bestseller Angela Marsons that will have you hooked on the Detective Kim Stone series.

It is getting to the point, twelve books in, where I no longer know what to write in a review for Kim Stone book. I may as well just reduce my review to a handful of words … Excellent book – just buy it. I mean, let’s face it. If you are a fan of the series you know you’re going to anyway. We always do, such is the wonder of this series and how well and truly Ms Marsons has us on the hook. I’m not sure she even needs bait anymore. Just the faintest whiff of that sharp pointed metal and we are up out of the water and off to Amazon faster than you can say ‘pre-order’.

With Killing Mind, she has served up another Kim Stone classic, this time delving into the murky and sometimes skin crawling world of cults and communes. I don’t think. there is anyone who can hand on heart say that they don’t have a little bid of morbid curiosity when it comes to the subject of communes. A fascination with what it is that makes certain people susceptible to the seductive idea of a commune – a community in which they escape from the harsh realities of life, seldom for the better, especially when it comes to crime fiction. This book takes that idea, of the enigmatic and charming Commune leader who preys on the vulnerable, and kicks it up a notch, starting with a brutal murder and ending with one of the team in great jeopardy.

The team are all present and, mostly, completely on board with this complex and sensitive case. It was fun to see Tiff/Tink, back with the team as she is a character who poses such a sharp contrast to the acerbic nature of Kim Stone that it’s actually fun to watch. She is like an Energiser Bunny, full of energy and enthusiasm, perhaps a little naive, but with the makings of a top Detective, so I’ll be interested to see how her character develops as I’m sure we’ll be seeing more of her in the future. Penn continues to grow on me and is really settled into the team now in spite of having big shoes to fill. Stacey is distracted by upcoming wedding worries and then there is Bryant. Poor old Bryant. He is the reason I say mostly as his mind is not fully on the job in hand. He has his own distraction, something that stops him being the usual counter to Kim’s madness. I enjoyed seeing this other side of Bryant, of learning more about what shaped him to be the Detective he is today, and the story, while hard to read, was a good way to get to know more about him.

Angela Marsons has done a great job of creating the commune in Killing Mind. She clearly has a keen interest in the subject and it shows in the way she has portrayed it. While a lot of the people who go there could easily be branded as victims, she has taken a slightly different path, making it clear that while most of us cannot comprehend this way of life, for some it is actually a blessing. Treatment is harsh though and some of the practices described will make you angry, as will the revelation of the truth about why the Leader, Jake Black, was motivated to provide such a seemingly altruistic and welcoming home for so many waifs and stray. He was a character who got my back up from the start, and likewise Kim’s spidey sense were in overdrive from the minute she met him. But I feel like she captured the kind of community feeling, the sense of being watched and controlled without knowing it perfectly well.

I’ve been in the strange position of once looking around a warehouse unit that had formerly been home to a commune and seeing all the possessions discarded, the childrens toys, pushchairs, old mattresses etc, gave me a really creepy feeling inside, hard to articulate, but a definite chill down the spine. Now the commune in KIlling Mind was nowhere near as bleak as that, but I still got that same unsettled feeling, that urge to grab a hold of the characters and try to shake some sense into them, such were the emotions the writing provoked, so bravo once again to Ms Marsons for that.

This is another cracking read in one of my favourite series of all time. I can’t believe we are at book twelve already. Definitely a must read for fans of the series so – back to my original comment – Excellent book – just buy it!

Angela Marsons is the Wall Street Journal and USA Today bestselling author of the DI Kim Stone series and her books have sold more than 3 million in 3 years.

She first discovered her love of writing at Junior School when actual lessons came second to watching other people and quietly making up her own stories about them. Her report card invariably read “Angela would do well if she minded her own business as well as she minds other people’s”.

After years of writing relationship based stories (The Forgotten Woman and Dear Mother) Angela turned to Crime, fictionally speaking of course, and developed a character that refused to go away.

She is signed to Bookouture.com for a total of 16 books in the Kim Stone series and her books have been translated into more than 27 languages.

Many of her books, including Blood Lines, Dead Souls, Broken Bones, Fatal Promise and Dead Memories reached the #1 spot on Amazon on pre-orders alone.