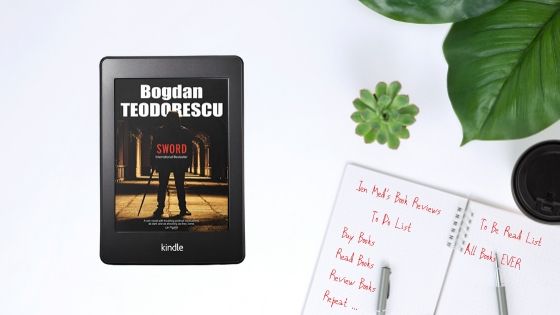 Today I am delighted to be sharing my thoughts on Sword the brand new thriller from Romanian author Bogdan Teodorescu, and publisher Corylus Books. Now, this book was meant to have seen it’s big launch at this year’s Newcastle Noir but the dastardly Covid thwarted those plans. Thankfully it has not yet managed to stop me blogging so I do hope you’ll all join me in wishing Bogdan a very happy publication day. My thanks to Marina (multi talented and lovely lady who also translated the book) and all at Corylus for providing a review copy of the book.

As a shadowy killer stalks the streets of Bucharest, seeking out victims from among the Roma minority, the police are at a loss to track down the murderer, who always dispatches in the same manner – hence the Sword nickname the media are quick to give to the killer. As panic starts to take hold and inter-racial tensions begin to reach boiling point, those in government and those who want to be try manipulate the situation for their own ends.

A bestseller in Romania and France, Sword is a tumultuous political thriller by journalist and political analyst Bogdan Teodorescu – echoing much of the fears and tensions of today’s political landscape.

This is the first time I have read any translated fiction from Romania so I really didn’t know what to expect when I started reading. The blurb sounding fascinating and I am always keen to read new authors so it seemed the perfect combination. The book starts in fairly dramatic style – not gratuitous in any way – but certainly surprising. From the very beginning we are introduced to a cold blooded killer. Their victims may not be the most sympathetic of characters – thieves, traffickers and confidence tricksters – but nonetheless they are still victims. And yet … this is less a book about the act of murder, or even the investigation into who may be behind the murders, to be fair, than it is about the public and political reaction to the murders themselves and the fact that the victims are all from a very specific part of Romanian society – the Roma community.

The book made for a fascinating read. Now I don’t know how much of the story is rooted in Romanian fact and how much pure Romanian fiction as I don’t know the country or the culture well enough to pass comment, but I could recognise in the story all of the prejudice, political grandstanding, point scoring and perceived back-stabbing that is inherent in all modern society. That sense of division between media and the political world, and even between the rival parties and Presidential candidates that had such an air of authenticity about it that made it feel a lot less like fiction that it perhaps should have done. From the internal meetings where one senior politician would gladly sacrifice another in order to protect their own skins and boost their own approval ratings, through to the way in which certain factions of the media would also sell themselves and their readers or listeners out in the names of self interest, it felt uncomfortably realistic.

At the heart of the novel is the theme of prejudice and the inherent suspicion with which the majority of the Romanian society are portrayed to regard the Roma Community. And that too felt uncomfortably real, something that was easy to identify with given the fact that the story mirrors the way in which a community of travellers would be viewed even on our own shores. But just as some elements of the community may seek out less legal ways in which to earn their keep, many are peaceful and fair people who find themselves caught in the crossfire of growing racial tension. And I don’t think it is much of a stretch for any reader to be able to translate that inherent prejudice and even unfair treatment in to any part of modern life. The way in which the author builds that growing tension, the constant provocation of the media to build up the ill feeling, just adds to the urgency of some of the scenes in the book. You become so invested in those divisions, you almost forget that there is a killer at large. They become little more than a secondary character ina. very complex political game.

This is not a fast paced book and I’ll admit it did take me a while to get into the style of writing as it is quite different from the kinds of full on action or police procedural books I am used to reading. But it did intrigue me and the more I read, the more I wanted to see if a) they would ever catch their killer and b) how far the politicians were willing to go to save their own skins with a situation that was fast becoming a full on political disaster. A really interesting take on the socio-political aspects of hunting a murderer at large and despite everything – you know, the dodgy politics and the murders and all – I really feel like I’d like to visit Romania now.

Bogdan Teodorescu trained initially as an engineer but his passion for words led him to a career change. As a journalist and communications expert, he became a sought-after political analyst and election campaign manager. In 1996-97 he was briefly Acting Head of the Public Information Department, which gave him ample material for the political thrillers he would later write. He is currently Professor of Political Marketing and Communications at the prestigious National School of Political and Administrative Studies in Bucharest, as well as president of an agency specialising in political analysis and opinion polls.

Aside from his academic publications, Bogdan Teodorescu has written five novels, all of them bestsellers in Romania, two travel journals and a prize-winning volume of poetry. Spada/ Sword was translated into French in 2016 to excellent reviews. Le Figaro called it ‘a noir novel with troubling political implications, as dark and as shocking as they come’, while Metro described it as ‘the perfect example of what a good novel (noir or any other colour) should be: intelligent, entertaining, asking tough questions.’

Corylus Book is a new venture aiming to publish exciting new voices translated into English. The people behind the company have very different backgrounds, in academia, publishing and more, as well as having a mixture of language, translation and other skills between the four of us.

It took a little while before we figured out that we were all thinking along similar lines and that we wanted to take a chance on presenting some of the great European crime fiction that wouldn’t normally make its way into English. With a shared passion for crime fiction and having all participated in or been in involved crime fiction festivals, it seemed the logical next step, and with that, Corylus Books came into being.

3 thoughts on “Sword by Bogdan Teodorescu”

Sunday starts right here. One skinny cappuccino and a side order of Dolly Parton and James Patterson.
Today I’m sharing my thoughts on The Twyford Code, the very clever new thriller from Janice Hallett.
Some fabulous #bookpost today #gifted by Head of Zeus - Mark Hill’s upcoming stand alone novel, One Bad Thing.
A lovely @bertsbooks subscription box delivery yesterday - #Demon by @mattjwesolowski and #BitterFlowers by Gunnar Staalesen. Both from @orendabooks wonderful collection.
A bit of my book collection - my @orendabooks shelfies.
Fabulous #bookpost today #gifted from @hodderbooks - The Hunting Ground, the brand new Finn & Paulsen thriller from Will Shindler.