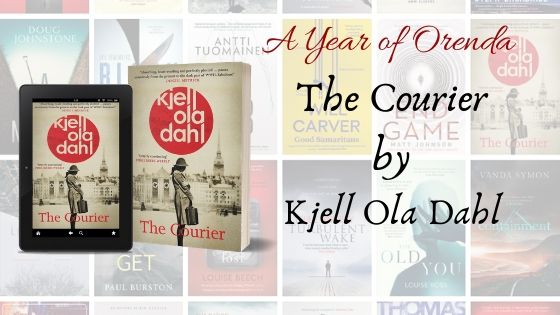 Today is the final day in our week of all things Kjell Ola Dahl and I am re-sharing my thoughts on The Courier, the stunning standalone novel set in post war Oslo. You can read Mandie’s review of the book right here. Read on to find out more about the book:

In 1942, Jewish courier Ester is betrayed, narrowly avoiding arrest by the Gestapo. In a great haste, she escapes to Sweden, saving herself. Her family in Oslo, however, is deported to Auschwitz. In Stockholm, Ester meets the resistance hero, Gerhard Falkum, who has left his little daughter and fled both the Germans and allegations that he murdered his wife, Åse, who helped Ester get to Sweden. Their burgeoning relationship ends abruptly when Falkum dies in a fire.

And yet, twenty-five years later, Falkum shows up in Oslo. He wants to reconnect with his daughter. But where has he been, and what is the real reason for his return? Ester stumbles across information that forces her to look closely at her past, and to revisit her war-time training to stay alive…

Written with Dahl’s trademark characterization and elegant plotting, The Courier sees the hugely respected godfather of Nordic Noir at his best, as he takes on one of the most horrific periods of modern history, in an exceptional, shocking thriller.

I genuinely do not know how to begin this review. I know I say that a lot, but with this book I don’t know quite how to describe the complexity of the plotting, the beauty of the language or the way in which it makes you think about what is arguably one of the darkest periods in recent history. I have just finished reading the book and whilst I know that the author, and the characters, have taken me on quite the journey. There is so much encompassed within the pages, history, secrecy and duplicity, that it’s hard to know exactly how I feel emerging on the other side.

In the simplest of terms, this is a book, set in wartime and post wartime Norway and Sweden. In the middle of World War II, in Nazi occupied Norway, a young mother, Åse is murdered – her partner and her child’s father, the only suspect. The lion’s share of the story is devoted to three main characters who touched, or were touched, by this tragedy, and . the various people on the periphery of their lives who inform the action and perhaps hold the key to what really happened on that fateful night.

First we have Ester, a member of the resistance and the eponymous ‘courier’, best friend to the Åse, but someone who flees to Sweden before the murder occurs. Then there is Gerhard – father and lover, but is he really also a murderer? And finally Sverre, a senior figure within the resistance, and a man who holds many cards close to his chest – the most important of which may be the reason why a man, believed to be dead, would suddenly reappear in Norway some 20 years after the war has ended,

Beautifully written, this book captures the mixed emotions of those caught up in the war. the persecution of Norwegian Jews is not something we often think about and yet the stark facts, sympathetically handled in this book through the portrayal of the loss of Ester’s family, are ones we can’t ignore. There is no glorification of war or of the resistance. In some respects they are simply used as a backdrop to the story which is, essentially, a murder mystery. And yet they add a layer of jeopardy and intrigue and an opportunity for the concealment of a vicious and unpalatable truth.

There are moments of great tension in the book, as some quite dramatic scenes play out. I really liked the character of Ester, and although she could occasionally come across as cold and detached, the more we learn about her, the more you understand why. She has a true inner strength which you cannot help but admire. Gerhard is a more complex character to understand and I felt myself torn in terms of how I reacted to him and his guilt, not quite able to figure out its origin. There is a clear chemistry between the pair and yet also distrust, a very complicated relationship which only draws you further into the story.

Told across primarily a dual timeline, the book moves seamlessly between 1942 and 1967, with the occasional trip into 2015, as we spend time with Gerhard and Åse’s daughter, Turid. The tension increases with each new chapter, and the more we read, the more the past is revealed until we reach the final, shocking conclusion and the truth behind what really happened to Åse.

Kjell Ola Dahl has managed to capture in amongst these pages something really thought provoking and moving, as well as dramatic and intriguing. The translation by Don Bartlett is superb, not a single jarring note, and we are led into a poignant, atmospheric and tragic story that transcends the clear devastation of the war upon the characters and the country, whilst still acknowledging the travesty and horror of the era in which it is set. A truly top class historical thriller.