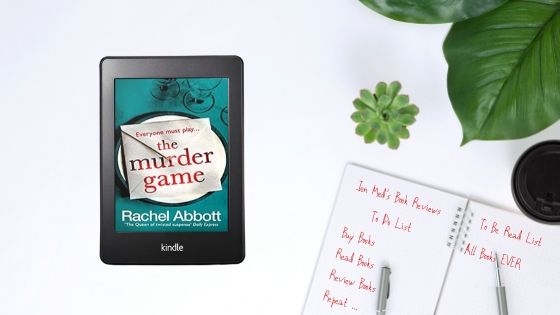 Today it is my pleasure to be sharing my thoughts on The Murder Game the latest book in the Stephanie King series from one of my favourite authors, Rachel Abbott. I was lucky enough to pick up a copy of the book at Harrogate last year, but delayed in reading it as I love to savour the experience. Thanks to Anne Cater of Random Things Tours for inviting me to join the tour. Here’s what the book is about:

A year ago today, we all gathered for Lucas’s wedding at his glorious Cornish home overlooking the sea.

But no one was married that day.

Now Lucas has invited us back to celebrate the anniversary. But the anniversary of what? The wedding that never happened, or the tragedy that occurred just hours before the ceremony was due to begin?

He’s told us that tonight he has planned a game. We have our costumes, we have our parts, and everyone must play. The game, he tells us, is about to begin.

What does Lucas want from us? What are we not being told? And what’s going to happen when this terrible game is over?

What I really enjoy about books by Rachel Abbott is that while they may be billed as being a police based series, the police investigations really only play a secondary part in the overall structure of the story. This book may feature recurring characters, in particular Sergeant Stephanie King, now on the verge of a new career in CID, but predominantly they are based around a slow burning psychological thriller. In this case, it is the story of a group of friends who meet for a wedding and end up watching a tragedy unfold.

From the very beginning of the book you start to get the ominous sense of something bad being about to happen. After all, in the world of crime fiction, no good ever comes from a group of friends coming together for the first time in years. Mix in a dose of wealth, a sprawling coastal manner and a dark and tragic history for the group and the scene is set for one hell of a twaited gathering.

The story is told primarily through the eyes of Jemma, a woman who has come to the group by virtue of marrying Matt, life long friend of Groom to be, Lucas. She knows nothing of her husband’s past, of his friends or of what happened some twelve years earlier. It is a really effective narrative tool as it means that as readers we are on the same journey of discovery, whilst still allowing that sense of tension and apprehension grow. Then there are passages told from the point of view of Alex, Lucas’ sister, a woman whose own story plays a large part in the events that unfold. Then you have Stephanie King, the key Detective in the series and although her scenes are in third person, her point of view is key.

King is a great character, not without her own doubts and worries, but with a keen instinct and ability to read people, it adds a real sense of authenticity to the story. She is dogged, suspicious and determined, yet with a great empathy that makes her a brilliant character to follow. Similarly, Jemma is a strong woman, although pushed to her limits by events that occur. I really felt her uncertainty at times, but also like the fire within her and her willingness to stand up to Lucas where everyone else only marched to his tune. She was another one with great instincts, although still unable to pull all of the pieces of the puzzle together until the end.

The clues are there for the canny reader, but the slow reveal of what is happening, the method that Lucas chooses in order to unmask a traitor in their midst, is original and a little disturbing at times, The eponymous Murder Game is designed to unmask a killer, but a raft of other secrets are unearthed too, some of which are surprising, some disturbing and others, almost playing to type with the kinds of entitlement that could be expected from this group of friends. They aren’t easy to like – with few exceptions – and certainly not easy to trust, even before the seriously bad life choices are exposed.

There is one element to the story which is a little heartbreaking when put into context. It is not written in a gratuitous way, it is not really dwelt upon for too long, but it is an important part of the story which, when the full truth comes to light, makes the conclusion, in a way, even more shocking. That said, this was another brilliant read from Rachel Abbott in a series which is going from strength to strength. Fans of the author are going to love it.

Rachel Abbott began her career as an independent author in 2011, with Only the Innocent, which became a No.1 bestseller on Kindle, topping the chart for four weeks. Since then, she has published eight further psychological thrillers and sold over 3 million copies. She is one of the top-selling authors of all time in the UK Kindle store, and her novels have been translated into 21 languages.

Rachel splits her time between Alderney – a beautiful island off the coast of France – and the Le Marche region of Italy, where she is able to devote all her time to writing fiction.

3 thoughts on “The Murder Game by Rachel Abbott”