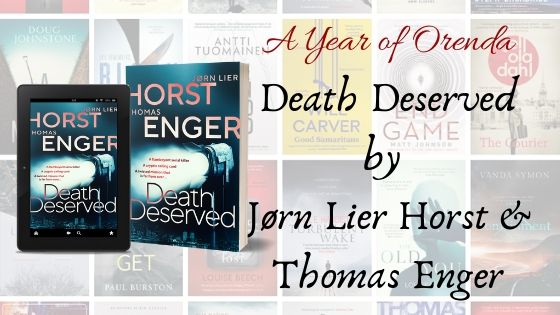 The final day of #EngerWeek (I know – sad times) sees Mandie sharing her thoughts on the first book in what I hope will be a very long running series, Death Deserved, the book that Mr Enger co wrote with fellow Norwegian author, Jørn Lier Horst. If you’d like to, you can read my thoughts on this fabulous book right here. Before we see what Mandie thought, here are the all important book bits:

Police officer Alexander Blix and celebrity blogger Emma Ramm join forces to track down a serial killer with a thirst for attention and high-profile murders, in the first episode of a gripping new Nordic Noir series…

Oslo, 2018. Former long-distance runner Sonja Nordstrøm never shows at the launch of her controversial autobiography, Always Number One. When celebrity blogger Emma Ramm visits Nordstrøm’s home later that day, she finds the door unlocked and signs of a struggle inside. A bib with the number ‘one’ has been pinned to the TV.

Police officer Alexander Blix is appointed to head up the missing-persons investigation, but he still bears the emotional scars of a hostage situation nineteen years earlier, when he killed the father of a five-year-old girl. Traces of Nordstrøm soon show up at different locations, but the appearance of the clues appear to be carefully calculated … evidence of a bigger picture that he’s just not seeing…

Blix and Ramm soon join forces, determined to find and stop a merciless killer with a flare for the dramatic, and thirst for attention.
Trouble is, he’s just got his first taste of it…

I just have to mention how much I am enjoying the challenge I set myself this year. With so many fabulous authors to discover I really am spoilt for choice; in fact, this book wasn’t actually in my plan but after seeing all the good things said about it, I snuck it into my reading list anyway and am chuffed that for once I am not 3 years behind everyone else. With not having read any other books written by either author (yes, I know I should be shot) I had no idea what to expect from this writing duo.

When blogger Emma Ramm decides to go to the house of retired athlete and newly published author Sonja Nordstrom, she didn’t expect to end up in the middle of a possible missing person investigation but that is exactly what happens. Alexander Blix is charged with leading the investigation, but when he spots Emma at the crime scene it brings back memories from his past as their paths have crossed before, how and why you will discover as the book progresses. When bodies of other celebrities turn up around the city with no immediate link to one another Alexander makes the decision to share some of the investigation with Emma in the hope that they can make a breakthrough.

Emma and Alexander are two very different characters, but their connection just seems to work and does not appear forced in any way. Although Alex knows that including Emma in the investigations will put him in direct conflict with his superior, you do get the feeling that he is not really that bothered. For him solving the crime is his primary goal and he will do this in whatever he considers to be the most expedient way, but he also feels that he owes her in some slight way. There is a similar conflict within Emma. She wants to get the story but as she is dragged further into the middle of it, she also doesn’t want to betray the trust that Alex has put in her. Throughout the investigations there are clues as to who the perpetrator is and who the next victim will be, and you are taken on a real merry dance as you try to work it all out. There is also the question throughout the book as to what constitutes a celebrity in the modern age, a conversation I quite often find myself having with the OH on a regular basis… then again his viewpoint is that if he has never heard of them then they are not famous so it counts an awful lot of people out of that category.

Although this is billed as a Blix and Ramm book I liked the relationship that was beginning to develop between Alex and his new partner Sofia Kovic. Initially it looked like she was put on the team to annoy Alex but as the investigations progressed you really got the sense that they liked working together and had each other’s back. It will be interesting to see how this working relationship continues over future books and if we get to find out more about what makes Sofia tick.

The book certainly kept me hooked right to the very end as you are given some red herrings as to who the killer is, and there was even a scene that appealed to my very warped mind of what is both gross but fun meaning that I absolutely loved this book. The writing is seamless, and you would never know that it was a collaboration between two established authors and am intrigued to know if they each wrote the character they could relate to most? This is the first in a new series and I can honestly say I can’t wait for the next instalment of what looks to be a truly interesting and exciting partnership.

(I don’t always read the acknowledgements in a book, but these ones made me chuckle)

Jørn Lier Horst and Thomas Enger are the internationally bestselling Norwegian authors of the William Wisting and Henning Juul series respectively. Jørn Lier Horst first rose to literary fame with his No. 1 internationally bestselling William Wisting series. A former investigator in the Norwegian police, Horst imbues all his works with an unparalleled realism and suspense. Thomas Enger is the journalist-turned-author behind the internationally acclaimed and bestselling Henning Juul series. Enger’s trademark has become a darkly gritty voice paired with key social messages and tight plotting. Besides writing fiction for both adults and young adults, Enger also works as a music composer. Death Deserved is Jørn Lier Horst & Thomas Enger’s first co-written thriller.

2 thoughts on “A Year of Orenda – Death Deserved by Thomas Enger and Jørn Lier Horst.”