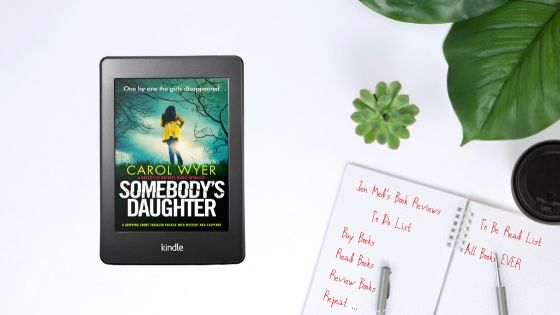 It is my absolute pleasure to be taking part in the cover reveal for the latest book in the DI Natalie Ward series by Carol Wyer. I love this series and always look forward to getting a fresh instalment. After the past few books I can’t help thinking that Natalie could do with being given a break. Having read this blurb, I don’t think it’s coming any time soon. But you don’t want to hear from me, you want to see the cover so …

Isn’t it gorgeous? And not only that, it sounds absolutely bloody thrilling too:

One by one the girls disappeared…

When the frail body of a teenage girl is discovered strangled in a parking lot, shards of ice form in Detective Natalie Ward’s veins. As Natalie looks at the freckles scattered on her cheeks and the pale pink lips tinged with blue, she remembers that this innocent girl is somebody’s daughter…

The girl is identified as missing teenager Amelia Saunders, who has run away from home and her controlling father. Natalie’s heart sinks further when it becomes clear that Amelia has been working on the streets, manipulated by her violent new boyfriend Tommy.

A day later, another vulnerable girl is found strangled on a park bench. Like Amelia, Katie Bray was a runaway with connections to Tommy, and Natalie is determined to find him and track down the monster attacking these scared and lonely girls.

But when a wealthy young woman is found murdered the next morning, the word ‘guilty’ scrawled on her forehead, Natalie realises that the case is more complex than she first thought. Determined to establish a connection between her three victims, Natalie wastes no time in chasing down the evidence, tracing everyone who crossed their paths. Then, a key suspect’s body turns up in the canal, a mole in Natalie’s department leaks vital information and everything seems to be against her. Can Natalie stop this clever and manipulative killer before they strike again?

An unputdownable crime thriller from an Amazon bestselling author that will have you sleeping with the light on. This gripping rollercoaster ride is perfect for fans of Angela Marsons, Rachel Abbott and Rachel Caine. Prepare to be totally hooked!

The book is out on the 9th July but you don’t need to wait to pre-order – you will find it right here.

Winner of The People’s Book Prize Award, Carol Wyer is an award-winning author and stand up comedian who writes feel-good comedies and gripping crime fiction.

A move to the ‘dark side’ in 2017, saw the introduction of popular DI Robyn Carter in LITTLE GIRL LOST, the #2 best-selling book on Amazon, #9 best-selling audiobook on Audible and Top 150 USA Today best-seller.

A second series featuring DI Natalie Ward quickly followed and to date her crime novels have sold over 600,000 copies and been translated for various overseas markets, including Norwegian, Italian, Turkish, Hungarian Slovak, Czech and Polish.

Carol has been interviewed on numerous radio shows discussing ”Irritable Male Syndrome’ and ‘Ageing Disgracefully’ and on BBC Breakfast television. She has had articles published in national magazines ‘Woman’s Weekly’ featured in ‘Take A Break’, ‘Choice’, ‘Yours’ and ‘Woman’s Own’ magazines and the Huffington Post.

She currently lives on a windy hill in rural Staffordshire with her husband Mr Grumpy… who is very, very grumpy.