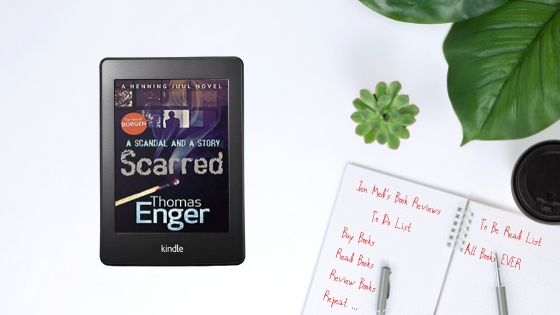 Day three of #EngerWeek and it’s time for the next book in the #HenningJuul series, Scarred. Henning Juul is such a brilliant character, catching up on his story has been a real treat for me and I am loving every minute of it. Here’s what the book is all about:

An elderly woman is found dead in a nursing home. Bjarne Brogeland, who heads up the investigation, soon realises that they are on the trail of a meticulous killer who has developed a keen taste for revenge. A killer who has only just begun…

Trine Juul-Osmundsen, Norway’s Secretary of State and Henning Juul’s sister, is accused of sexually harassing a young male politician. As the allegations cause a media frenzy, Trine receives an anonymous threat telling her to resign. If she doesn’t, the truth about what she really did that night will be revealed.

Scarred reporter Henning Juul, finds himself torn between the two high profile cases. He wants to help his estranged sister, but as he digs into their past, he discovers memories that haunt them both. Memories of a broken home. Memories of a dead father.

As the two cases collide, both their worlds threaten to fall apart.

Scarred is the third novel in the acclaimed Henning Juul series, following Burned and Pierced, which was shortlisted for the 2013 Petrona Award.

So, this is it. The final book to complete the series. Totally out of order, admittedly, but completed nonetheless. And now I can honestly say that so many of those little unknowns, the teeny questions that arise when reading the later books in a series, have been answered and I am left feeling truly satisfied. And a little sad. Because now it really is over and there is no more Henning Juul. Unless I read them again. In order. A distinct possibility.

This book follows two distinct threads. One is a murder case – the brutal killing and mutilation of an old woman resident in a care home. A former teacher she had few visitors and no apparent enemies, so who would seek to hurt her in that way. Secondary to this investigation, but no less important to the plot Henning finds himself face to face with his estranged sister, now embroiled in a political scandal. But why is she running away and not using the clear evidence she has to clear her name?

I have loved this series for the simple fact that, as a reporter and not a police officer, Henning has so much more freedom to ask the questions other’s can’t ask and to challenge the expected course of events. He also has seemingly more freedom in his day, letting him track down not only his sister but leads in the case as to who set the fire that killed his son.

Thomas Enger is a truly skilled writer, infusing the story with a perfect balance of intrigue, mystery, and threat. We are fed many potential suspects in the murder of the old woman, many possible reasons for her demise too. But the killers true identity is kept hidden for quite some time, even though we are treated to their perspective throughout the story. And with the narrative focus moving from Henning, to the lead Detective, Brogeland, and even to Trine, I found myself well and truly on the hook with a story that was perfectly paced to drive the story onward.

Setting has always been a key part of these books and as the story moves from the hustle of the city to a remote cabin that Trine retreats to whilst she contemplates her next step, Thomas Enger is able to capture each location so clearly that you can feel the wind on your face, smell the essence of the sea, and feel as much a part of the action as the characters themselves. There is still that overwhelming sense of melancholy that dominates Hennings life, but also a sense of passion that his quest to find answers is bringing him, and us, ever closer to the truth. Add in the intensity of the final showdown, where not only a killer but Trine’s accusers are cornered, and it make s=for one hell of a read.

If I was honest, I would truly advise that you read. the books in order. The last two in particular, Pierced and Scarred, are key parts of this very dark and emotional journey for Henning and really do set readers up for what is to come, especially in the final book Killed. But whichever book you start with, I’d just recommend you read them as they are absolutely brilliant. Loved them all.

Thomas Enger is a former journalist. He made his debut with the crime novel Burned in 2010, which became an international sensation before publication, and marked the first in the bestselling Henning Juul series. Rights to the series have been sold to 28 countries to date. In 2013 Thomas published his first book for young adults, a dark fantasy thriller called The Evil Legacy, for which he won the UPRISEN (the prize for best YA novel). His next YA thriller Killer Instinct, upon which Inborn is based, was published in Norway in 2017 and won the same prestigious prize. Most recently, Thomas has co-written a thriller with Jørn Lier Horst. He also composes music, and he lives in Oslo.

3 thoughts on “Scarred by Thomas Enger”