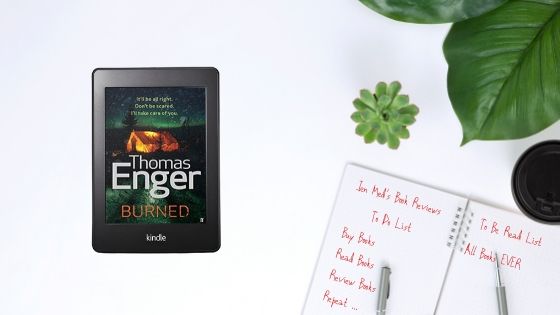 As part of our Year of Orenda, we’ll be taking a look back at all of the previous releases of all of the Orenda Books authors. One such author is Thomas Enger who has released four absolutely excellent books under the Orenda banner but whose brilliant Henning Juul series started out life with another publisher (but we don’t talk about that …).

As part of a week long celebration of all books Thomas Enger – henceforth known as #EngerWeek – Mandie will be focusing on the final two books in the Henning Juul series Cursed and Killed, but I’m taking the opportunity to take a look at the first three books, beginning with Burned, the book that started it all. Here’s what it’s all about:

A BRUTALISED VICTIM IN THE WILDS
A solitary tent is found to contain the body of a half-buried woman. She’s been stoned to death. There are lash marks across her back. One of her hands has been cut off.

A LONE VOICE
Two years earlier internet reporter Henning Juul lost his son, Jonas, in a domestic fire. As he returns to work, physically and emotionally scarred, Henning struggles to escape this past and to be taken seriously again as a reporter – by his colleagues, his ex-wife and the police.

A MYSTERY IGNITED
Told to cover the story of the woman in the tent, he finds an increasingly dangerous trail and, despite an early arrest, he is convinced that the story is more complex than the police think…

Broken, both physically and mentally, Henning Juul is just one of those characters who I became invested in from the very first time I ‘met’ him, while reading Cursed. Now this was a long way into Henning’s journey to find out the truth about what happened to his son, so it was really intriguing to take a step back in time to join Henning just as he is about to try and restart his life after the tragic fire which cost him almost everything.

What he finds as he re-enters his workplace for the first time in two years, is just how much everything has changed. It is all shiny and new, from the fixtures and fittings of the offices right down to the relationship his ex wife Nora has engaged in with the station’s new super star journalist. It is hard for Henning who still bears the scars of the fire and who still suffers emotionally, to find his feet in this new world. He lost so much of himself in the fire, but he didn’t his journalistic instinct or his nose for a story and it is this which drives him to look deeper into a particularly harrowing story; that of a young woman who appears to have been stoned to death.

The case is complex, touching upon the Muslim faith, the idea of sharia law and of revenge killing. It brings Henning face to face with a merciless group of men who would kill to protect each other, their business and their faith and on more than one occasion Henning finds himself once again dicing with death. But there is much more to the story than meets the eye and Thomas Enger has very skilfully woven together so many seemingly unconnected threads that you will not fully understand where the story is heading, or the truth of what has happened until the very end.

The characterisations in this book were excellent, very diverse and carefully delivered to the reader. Generating fiction based around any faith is a very difficult thing to do, the author having to walk a fine line between stereotype and reality, but Thomas Enger manages this well, capturing the sense of the prejudice and mistrust that surrounds the Muslim faith in many a community. And yet the story goes beyond being a criticism of the faith; in itself religion becomes more of a back drop to the rest of the story.

Full of moments of introspection, where Henning struggles with what has happened in his past, and also of moments of real tension where he is placed in great jeopardy, the story kept me engaged and determined to find out who the killer was and what their motives were. And you get a real sense of place from Enger’s writing. I don’t know Norway at all, but I had a crystal clear image in my mind as I progressed through the book, of the landscape within which the story was being told. Atmospherically, it added to the ominous feeling of the investigation.

Bizarrely, the book also enhanced my thus far none existent knowledge of children’s television programme, In The Night Garden. Not something I’d ever thought would happen reading this series and you’ll need to read to understand why it amused me and my sister.

I listened to Burned, rather than read it, enjoying the audiobook while on holiday and I can highly recommend it. The translation was brilliant so hat’s off to Charlotte Barslund for that, and to Gareth Armstong for the narration of the audio book. A cracking start to the series.

Thomas Enger is a former journalist. He made his debut with the crime novel Burned in 2010, which became an international sensation before publication, and marked the first in the bestselling Henning Juul series. Rights to the series have been sold to 28 countries to date. In 2013 Thomas published his first book for young adults, a dark fantasy thriller called The Evil Legacy, for which he won the UPRISEN (the prize for best YA novel). His next YA thriller Killer Instinct, upon which Inborn is based, was published in Norway in 2017 and won the same prestigious prize. Most recently, Thomas has co-written a thriller with Jørn Lier Horst. He also composes music, and he lives in Oslo.

Today I share my thoughts on The Devil’s Advocate by @sscav which is out tomorrow.
A new spot of #gifted book-post from Sphere today - Cold Justice, the upcoming debut action thriller from @antmiddleton.
Today I’m sharing my thoughts on The Hunt And The Kill by @holly_golucky, the latest Casey Benedict thriller.
Today I shared my long overdue review of Shadows by Paul Finch.
I am delighted to share the exclusive cover reveal for the upcoming new release from @orendabooks - Fall by West Camel.
My little #agathachristie stack. 😍