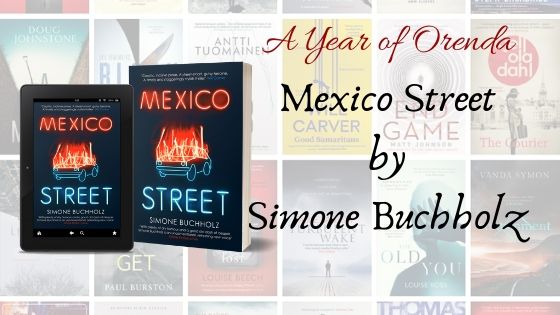 I am absolutely thrilled to share my thoughts on Mexico Street by Simone Buchholz as part of our continuing Year of Orenda. This is book three in the Chastity Riley series and once again shows unique and intriging styling from the author. My thanks to publisher Orenda Books for providing an advance copy of the book, and to Anne Cater from Random Things Tours for accommodating us in the tour. Here’s what it’s all about:

Hamburg state prosecutor Chastity Riley investigates a series of arson attacks on cars across the city, which leads her to a startling and life-threatening discovery involving criminal gangs and a very illicit love story…

Night after night, cars are set alight across the German city of Hamburg, with no obvious pattern, no explanation and no suspect.
Until, one night, on Mexico Street, a ghetto of high-rise blocks in the north of the city, a Fiat is torched. Only this car isn’t empty. The body of Nouri Saroukhan – prodigal son of the Bremen clan – is soon discovered, and the case becomes a homicide.

Public prosecutor Chastity Riley is handed the investigation, which takes her deep into a criminal underground that snakes beneath the whole of Germany. And as details of Nouri’s background, including an illicit relationship with the mysterious Aliza, emerge, it becomes clear that these are not random attacks, and there are more on the cards…

If there is one thing that can be said about the Chastity Riley, it is that every single book has that strange feeling of being very familiar and yet undeniably unique. Each one has a slightly different styling, brought together by the tainted wit and wisdom of state prosecutor, Chastity. Her’s is the one constant, the narrative voice that drives the largest part of the story along, but that is really where the similarity ends as Simeon Buchholz has found a way of creating both continuity and originality with each new release.

In truth, there are many things that can be said about these books, and about Mexico Street in particular. With each story the author draws in and pulls apart a different aspect of society, and in this case it is. the whole idea of identity, family and culture which goes under the microscope in a case which is as intriguing as it is frustrating for the both investigators and readers alike.

Now the blurb really does tell you everything about the story that you need to know. The central theme revolves around the murder of a man who belongs to what can only be described as a very misogynistic clan. Or several clans if I’m being truthful who, aside from their name, share only the fact that they are, in essence, stateless, having been renounced by both their native country and by Germany, who allow them to stay mainly by virtue of there being nowhere else to send them. Their traditions feel dated, but their convictions and passions running high. Their treatment of women will leave many readers cold and yet it has that irrefutable air of authenticity that keeps you glued to the page.

For me, this story had that kind of Romeo and Juliet vibe – the star crossed lovers whose fates seemed to be doomed from the start. And yet … well, nothing is ever straightforward in a Chastity Riley novel and if you think you know. what is going on, think you’ve called it from the start, think again. There is every possibility that you are completely wrong.

I do love the characters that Simone Buchholz has created. Chastity Riley is a tough gal, pretty smart and with great instincts, and yet in this book there is a real sense of vulnerability and chaos around her. Actually I say that like there isn’t always chaos around her, there is, but this time it takes her to a whole new level. Her personal life is tangled, her confidence rocked and her ability to focus on the job well and truly compromised. It actually makes her a far more interesting character to be with and to analyse because, let’s face it – who wants to read about someone with the perfect life? That’s not this book and certainly not Chastity.

Got to be honest, I was thrilled to see Ivo back. I don’t know what it is about him as he’s certainly not the picture perfect guy either (he drinks too much, never sleeps and is as damaged as Chastity) but I really do like him. The sparring and chemistry between him and Chastity is great to read and fun to follow, although the author has thrown a real spanner in the works this time around, one that leaves our heroine very, very torn …

As always there is a real sense of place in this novel and the author brings us past the perhaps more tourist centric areas of Hamburg into the heart of the clan territory, where the sense of menace and threat is multiplied tenfold and you could cut the tension with a knife. That whole lack of trust, the refusal to help even in resolving the death of one of their own, that bubbling animosity and friction that occurs, is spot on. And it is a stark contrast to the simplicity of the scenes that occur between the novels victim, Nouri, and his childhood friend Aliza. If I am honest, it is some of those scenes, where you see Nouri’s real character emerge, the kind of role reversal in the displays of bravery between the pair, that I enjoyed reading the most.

This is a story that I think will surprise readers. There is a lot of spirit and emotion throughout, as well as scenes that may well incense people. Chastity’s distraction leads to key clues being missed, something that keeps the tension bubbling along underneath the whole story. But I think it’s true strength lies in the relationship that blooms between the two children, the way this is presented on the page and way in which the book captures the prejudices, the traditional and conflicting values, that exist within Nouri and Aliza’s world.

If you are loving the Chastity Riley series, then this is another compelling instalment. But prepare yourself for something a just little bit different and characteristically quirky. You won’t be disappointed.

Simone Buchholz was born in Hanau in 1972. At university, she studied Philosophy and Literature, worked as a waitress and a columnist, and trained to be a journalist at the prestigious Henri-Nannen-School in Hamburg. In 2016, Simone Buchholz was awarded the Crime Cologne Award as well as runner-up for the German Crime Fiction Prize for Blue Night, which was number one on the KrimiZEIT Best of Crime List for months. She lives in Sankt Pauli, in the heart of Hamburg, with her husband and son.

Books in the Chastity Riley Series: