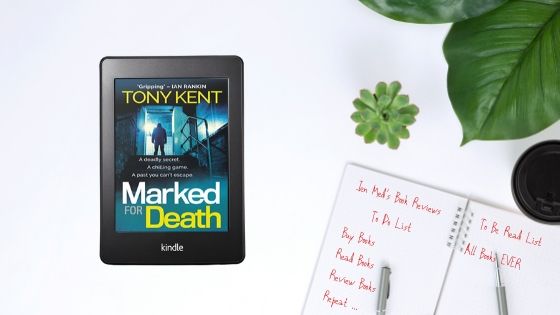 I am very disappointed with myself. I have had Tony Kent’s Marked For Death on my TBR for a year and I have no excuses or reasons to justify it. I loved book one, Killer Intent, although I was late to that particular party too! But with the third book in the series, Power Play, to be released very shortly, it seemed like now would be a very good time to catch up with my the series. Here’s what the book is all about:

A deadly secret. A chilling game. A past you can’t escape.

When London’s legal establishment is shaken to its foundation by the grisly crucifixion of a retired Lord Chief Justice, Detective Chief Inspector Joelle Levy is tasked with finding his killer. With fifty years of potential enemies to choose from, only the identical murder of former solicitor Adam Blunt offers a ray of hope: what is it that connects these victims who met such a gruesome end?

Assigned to the story from the start, news reporter Sarah Truman sets out to investigate on her own, not suspecting that the trail will lead straight back to her own front door and her fiancé Michael Devlin. A criminal barrister determined to prove the innocence of his own client, Michael is at first oblivious to the return of the murderous figure from his past – until tragedy strikes closer to home.

Struggling with his grief and guilt, and now caught up in a madman’s terrible quest for revenge, Michael must race to bring the killer to justice – before it’s too late.

Well … I wasn’t expecting that. Not that the book would be brilliant – I was expecting that, obviously. But this story, the mixture of legal thriller and action was just about perfect.

When I picked up book one in this series, Killer Intent, I quickly grew to love the characters of Michael Devlin, Sarah Truman and Joe Dempsey. A brilliant trio who held your attention from the first page to the last. Well this is very much Michael’s story, with his now fiance, Sarah, along for what is going to be a very turbulent and deadly ride. Michael is no stranger to loss, and this time is no different as he is faced with a murder case, both one he is defending and one which is very much in the headlines, that brings the threat devastatingly close to home once again.

I don’t want to say too much about the story other than this is one where a decision made many years earlier, for all of the right reasons, comes back to haunt those involved in a the most severe of ways. The murders are violent but kept largely off the page, the description of the aftermath, the devastation caused enough to highlight the cruelty inflicted and the level of anger with which the acts are carried out. Tony Kent writes in such a way that you don’t need to be there for the actual act to feel the menace and the threat inherent in the story. There is only really one major scene of violence that the reader is present for, but it fits the story and is over as quickly, a kind of blink and you miss it act of such minimalist efficiency that shows the measure of the man behind the violence.

I really do love the characters of Michael and Sarah and this time around we see them both in their element, doing what they do best. Michael is caught up in a murder trial, now as QC, defending a young man whose innocence he believes in wholeheartedly. His skills in the court, his innate ability, are fun to watch, his belief in his client absolute. This is where Tony Kent’s own experience and knowledge add such authenticity to the text. No doubt elements have been embellished to make it more ‘entertaining’ to readers, but there is a ring of truth that he brings to events as well. Michael is such a principled character, that things we learn throughout the book might appear shocking and yet they also make him more appealing, more relatable. A man who will do anything to protect people he loves, respects and those he believes in.

Sarah is back on the frontline as a reporter, finding herself working the main murder case from a completely different angle. I like Sarah – she is honest and, like Michael, principled, wrestling between doing the right thing by her job and by the people who are in danger from a very violent killer. The friendship she strikes up with the lead investigator, Chief Inspector Joelle Levy, feels right. Levy is another strong female character, dedicated to her job and her family. I liked her straight off the bat, a kind of female equivalent of Joe Dempsey, with skills learned from years working for Israeli special forces. There is an open relationship between her and Sarah, quick to form and one which allows the story to flow perfectly.

The book is full of action, of shocks and thrills that will keep you on edge, whilst also being rich in emotion and character. The flow back and forth between the court case and the murder investigation is seamless, the language authentic but accessible. The characterisation is perfect, and the action balanced brilliantly, keeping the intensity when needed and offering moments of quiet reflection too, allowing readers to catch their breath. With a high stakes, high octane showdown near the end and a moment of being completely blindsided to boot, this is another brilliant read. Can’t wait to tuck into book three now.

Tony Kent is the author of the successful ‘Killer Intent’ series of books, featuring unorthodox criminal barrister Michael Devlin, international intelligence operative Joe Dempsey and tenacious TV reporter Sarah Truman. Beginning with Tony’s debut novel ‘Killer Intent’ – released in January 2018, selected as one of the 10 books included in the inaugural Zoe Ball Book Club on ITV1, a fixture in the WH Smith bestseller list for almost four months of 2018 and now included in the Crime Time Best of the Year 2018 list – the series continues in February 2019 with the release of ‘Marked For Death’.

Tony’s career history includes prosecuting and defending in many high-profile, nationally reported criminal trials, including allegations of murder, armed robberies, multi-million pound frauds and all other serious criminal offences, as well as defending a wealth of famous sportsmen and women in respect of both their ‘on-field’ and ‘off-field’ legal issues.

In addition to being a highly experienced criminal barrister, Tony is also a former champion boxer, having competed internationally at heavyweight and won a host of domestic amateur championships over a 12 year career in the sport. As a result of these complimentary fields of expertise he brings a wealth of detail, personal insight and real-life experience to the legal, the procedural and the violent elements of his unputdownable thrillers.

One thought on “Marked for Death by Tony Kent”