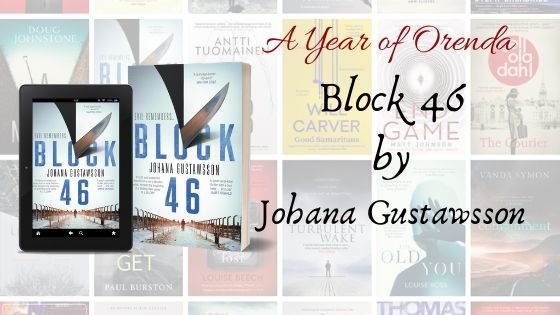 Today I hand back to Mandie who has a review of Block 46, book one in the Roy and Castells series by Johana Gustawsson. I’ve really enjoyed this series and had the pleasure of reading Block 46 when it was first released. You can find my thoughts on the book right here. Before we hear what Mandie thinks, here’s the all important book bits:

Hampstead Heath, London. The body of a young boy is discovered with similar wounds to Linnea’s.

Buchenwald Concentration Camp, 1944. In the midst of the hell of the Holocaust, Erich Hebner will do anything to see himself as a human again.
Are the two murders the work of a serial killer, and how are they connected to shocking events at Buchenwald?

Emily Roy, a profiler on loan to Scotland Yard from the Canadian Royal Mounted Police, joins up with Linnea’s friend, French true-crime writer Alexis Castells, to investigate the puzzling case. They travel between Sweden and London, and then deep into the past, as a startling and terrifying connection comes to light.

Plumbing the darkness and the horrific evidence of the nature of evil, Block 46 is a multi-layered, sweeping and evocative thriller that heralds a stunning new voice in French Noir.

So confession time…. Block 46 has been on my TBR pile since forever and I have no real excuse for this other than I am a crappy reader. Then again it also means that I have been able to save it for a time when I can truly enjoy reading it. I had been told (once or twice) by my sister that this book would be just the sort of thing I would love, it being a mix of the past and the present, and the story at the heart of it being something that has held my fascination for a very long time.. thanks sis you were spot on. Reading this caused me a couple of sleepless nights… primarily because I couldn’t put it down so found myself reading it late into the night.

From the very first chapter I found that I was drawn into the story. The chilling description certainly set the scene for what was ahead. Not only are you drawn into the investigation into the murder of Linnea Blix, but you are also given an insight into the horrors of Buchenwald Concentration Camp and all that Erich Ebner had to endure there. How these two timelines connect is revealed slowly but even then, there was still a little surprise in store.

Alexis Castells and Emily Roy couldn’t be more different to each other, having met several years before they have a respect for each other, and they are both determined to find out what happened to Linnea. Alexis wants to find out what happened to her friend so manages to get herself attached in whatever way she can to the investigation and for Emily, her job as a profiler means she is determined to delve into the lives of everyone connected to the victim. What is confusing is that several other bodies have turned up but, except for Linnea they are all young boys. Now she is not sure if she is hunting one killer or two. The reality of what they eventually find is truly chilling.

This book certainly took me on quite a journey. No matter how much I read about the horrors of the concentration camps I will never truly understand what the people in them had to endure or how the survivors coped once they were liberated. The author did not shy away from anything from that time, and with her personal connection to it all you can understand why. For me the pace of the story is what made it a truly chilling and compulsive read. Even now I just don’t know how to describe exactly how it made me feel but I have to thank the Author for producing what is one of my favourite books of the year so hopefully I am forgiven for taking so long to read it.

Born in Marseille, France, and with a degree in Political Science, Johana Gustawsson has worked as a journalist for the French and Spanish press and television. Her critically acclaimed Roy & Castells series has won the Plume d’Argent, Balai de la découverte, Balai d’Or and Prix Marseillais du Polar awards, and is now published in nineteen countries. A TV adaptation is currently underway in a French, Swedish and UK co-production. Johana lives in London with her Swedish husband and their three sons. She drew on her own experience of fertility clinics and IVF to write Blood Song and is happy to speak and write pieces about this.