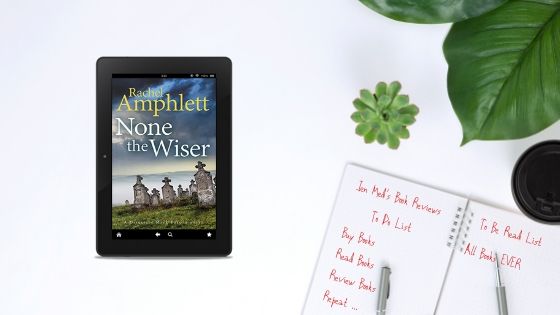 Today it’s my pleasure to wish a very happy publication day to Rachel Amphlett and to share my thoughts on her brand new thriller, None The Wiser. This is the first book in a new series featuring Detective Mark Turpin and what a start it is. I’ve long been a fan of Rachel’s work and this is shaping up to be another real winner. Here’s what the book is all about:

‘Forgive me Father, for I have sinned…’

When a parish priest is brutally murdered in cold blood, a rural community is left in shock – and fear.

New to the Vale of the White Horse, Detective Sergeant Mark Turpin discovers the murder bears the hallmark of a vicious killer who shows no remorse for his victim, and leaves no trace behind.

After a second priest is killed, his broken body bearing similar ritualistic abuse, the police are confronted by a horrifying truth – there is a serial killer at large with a disturbing vendetta.

As fear grips the once tranquil countryside, Mark and his team race to uncover a tangle of dark secrets and lies before the killer strikes again.

In doing so, Mark finds out that the truth is more twisted than he could ever have imagined…

As new starts go, this is one hell of a baptism of fire for newly appointed Detective Sergeant Mark Turpin. Returning to work with a brand new team after an extended period of absence he is immediately drawn into a case of the very brutal murder of a parish Priest. With no clear motive and no real suspects, this is the kind of case he can get his teeth into …provided he can keep his own demons at bay. From the outset we are drawn into the action, party to the first murder and those which subsequently occur – or at least are attempted. It creates that anticipation, that need to know why this person has been targeted, a feeling that doesn’t subside until the last page.

Mark Turpin is an intriguing and complex character, but one that I grew to like very quickly. That is one of the key strengths of that author – her ability to create believable characters that you want to go on a journey with. Turpin, along with his colleague, DC Jan West, are two such characters, and although you get the impression that it won’t all be plain sailing between the pair, after a very shaky start they soon settle into their stride and ultimately make a formidable team. Turpin is a man with a past, and his move to the new team follows a difficult case which affected him on a very personal level. He is strong willed, logical and determined and quite straight talking, yet defies the typical conventions of the jaded, damaged, heavy-drinking detective. It’s quite refreshing. Jan is equally as strong willed, and very much the mothering type which made me smile. Chalk and cheese – or cheese and pickle sandwiches as the case may be.

The case is full of twists and turns, the number of suspects seemingly growing with each page turn. There are various threads to this story which as they are pulled together may surprise readers, as well as there being that underlying sense of knowing where the story may well lead. But as to who and exactly why, Rachel Amphlett does manage to keep readers in suspense to the very end. I really enjoyed the pacing of the story, finding it matched the setting and the investigation perfectly. Nothing too break neck – that wouldn’t have worked – but with an ongoing sense of jeopardy and those moments of action where the tension ramps up and you feel compelled to read onward to the unexpected conclusion.

For book one in a series, this really drew me in and I am keen to see where the author takes us next. It is an intriguing teamin a rural setting which lends itself to a myriad of secrets behind all those closed doors. The possibilities are endless. Can’t wait to read more.

One thought on “None the Wiser by Rachel Amphlett”