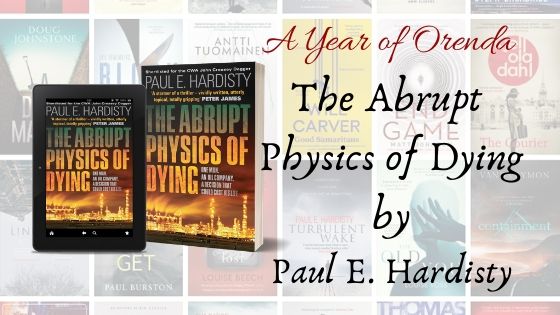 So here we are. One of the very reasons that Mandie and I chose to undertake the Year of Orenda in the first place was to help Karen and everyone at Orenda Books in celebrating five whole years of #TeamOrenda. Today marks the fifth anniversary of the very first paperback title to be released by Orenda, The Abrupt Physics of Dying by Paul E. Hardisty, and I am so excited to finally share my thoughts with you on this book. Better than that, we’ve decided to declare this week Hardisty week, and over the next few days we’ll be featuring all four Claymore Straker books on the blog, plus taking a look back at my thoughts on Turbulent Wake, my 2019 Book Of the Year!!!

One man. An oil company. A decision that could cost his life.

Claymore Straker is trying to forget a violent past. Working as an oil company engineer in the wilds of Yemen, he is hijacked at gunpoint by Islamic terrorists. Clay has a choice: help uncover the cause of a mysterious sickness afflicting the village of Al Urush, close to the company’s oil-processing facility, or watch Abdulkader, his driver and close friend, die. As the country descends into civil war and village children start dying, Clay finds himself caught up in a ruthless struggle between opposing armies, controllers of the country’s oil wealth, Yemen’s shadowy secret service, and rival terrorist factions.

As Clay scrambles to keep his friend alive, he meets Rania, a troubled journalist. Together, they try to uncover the truth about Al Urush. But nothing in this ancient, unforgiving place is as it seems. Accused of a murder he did not commit, put on the CIA’s most-wanted list, Clay must come to terms with his past and confront the powerful forces that want him dead.

A stunning debut eco-thriller, The Abrupt Physics of Dying will not only open your eyes, but keep them glued to the page until the final, stunning denouement is reached.

It’s been a while since I read my first Claymore Straker book (which happened to actually be the third in the series – I’m contrary like that) but as soon as I started to read, on in this case listen to, The Abrupt Physics of Dying, it felt familiar. Solid. Safe. Not safe in a ‘this is going to be a pedestrian experience’ kind of way, but safe in that I know and trust that Paul Hardisty is going to keep me entertained, whilst challenging me in the ways that only a really well written and thought provoking piece of writing can.

Set in Yemen in the early 1990’s, the book is a combination of full on action, environment and socio-political thriller which takes a long look at the dark practices of big business who are willing to sacrifice the indigenous people of Yemen for the sake of the all important dollar. This time around, the industry that comes under scrutiny is the oil industry, just starting to build in Yemen under the influence and investment of Petro-Tex. The book starts in thrilling style, with Straker and his driver being hijacked by two men who seem to have their own reasons for wanting to take the two men hostage. When their captors choose to release Straker but not Abdulkader, it is soon clear why they have been taken. Straker is to pass on a message, a message he isn’t certain his employers will want to hear, and not one is is certain he wants to believe.

From here on in we see a building of tension, anger, double crossing and corruption that will see Straker’s thoughts and ideals challenged in ways he hasn’t known since the war. I don’t know if I was at an advantage or disadvantage in reading the third book first, as in doing so I already knew a little of Straker’s moral code, but I think that even if I didn’t, Paul Hardisty delivers the transition of Straker from skeptic to believer beautifully. You can practically feel the turmoil that he has within him, feel the churn that is taking him from cynical engineer to a man who will fight hard for all that he believes in.

What is clear throughout the book is both the author’s personal experience as an engineer, and his passion for the environment and the impact of big business on the communities and countries that they are essentially ravaging. Whilst Straker may have gone into this line of work because he liked the numbers, the calculations, the certainty of it almost, you can see him lose that faith in what he knows is easy in favour of what he knows is right. Not that orchestrating all of the backhanders and ‘facilitated’ government approvals is easy for him, especially when he isn’t being paid.

I am hoping that the central thread of this story is still only fiction, and that it is not first hand experience of some abhorrent practices that has driven the narrative, but it certainly feels authentic and the lack of care from the senior Managers within Petro-Tex had a ring of truth to it. You only have to look at the headlines over the years, particularly in the 90’s, to know how little care was taken over environmental matters when there were shortcuts to be taken and money to be saved. Set against the backdrop of real life domestic conflict in Yemen, it is an uncomfortably believable read at times.

I did love going back to the start though and seeing the evolution of Straker’s character. When I first met him he was an extremely worn down and jaded character, and in truth there is still some of that present in him in this earlier story, the amplified effect of fighting a war. But he is a different man here and seeing the softer, romantic side when he meets Raina, as romantic as Straker gets anyway, drew me to him as a character even more. His passion and compassion, although often hidden, is inherent and one of the real things that gives him the strange combination of strength and vulnerability that I love.

Straker is a damaged man, no doubt about that, and it happened long before this story, but each page turn taught me more about him, cementing him as a true action hero in my eyes. Raina is an equally fascinating character. She has hidden depths, ones that are slowly revealed throughout the course of the novel, often in shocking and surprising ways. The author captures both her spirit and her inner conflict perfectly, and she has much to be conflicted about, as readers will grow to understand.

Whilst this is a thriller, and the action, when it happens, comes thick and fast, it is also a very thoughtful and contemplative novel. The language used is rich in imagery and brings the setting, and the circumstance, to life. Technical knowledge is used sparingly but very effectively, language tailored to the pursuit of the story that both informs and thrills. The author draws on true events of the time to provide a backdrop to the story and this increases the sense of fighting for survival that echoes throughout. There are moments of real compassion, moments which make you pause and reflect as you take in the devastation that is occurring on the page. Other scenes have you holding your breath in anticipation as the pacing spikes, the jeopardy increases and the risks that Straker faces draw you ever closer to the edge of your seat. And just when you think that the worst may be over, the author ramps up the tension once more for that last climactic showdown.

Pacy, thrilling and thought-provoking with a real cinematic vibe, this is what good thrillers should be. Far more than just a shoot-em-up, this book draws you in from the off and will have you thinking about the impact of big business and greed and whether the gains are ever worth what it truly costs the planet.

A beautiful blend of action, heart, fantastic characters, stunning narrative and centred around socio/political and environmental stories that are astounding in their authenticity and steeped in gritty realism. Brilliant stuff.

Canadian Paul Hardisty has spent 25 years working all over the world as an engineer,
hydrologist and environmental scientist. He has roughnecked on oil rigs in Texas, explored for gold in the Arctic, mapped geology in Eastern Turkey (where he was befriended by PKK rebels), and rehabilitated water wells in the wilds of Africa. He was in Ethiopia in 1991 as the Mengistu regime fell, and was bumped from one of the last flights out of Addis Ababa by bureaucrats and their families fleeing the rebels. In 1993 he survived a bomb blast in a café in Sana’a, and was one of the last Westerners out of Yemen before the outbreak of the 1994 civil war. Paul is a university professor and CEO of the Australian Institute of Marine Science (AIMS). He is a sailor, a private pilot, keen outdoorsman, conservation volunteer, and lives in Western Australia.

One thought on “A Year of Orenda – The Abrupt Physics Of Dying by Paul E. Hardisty”