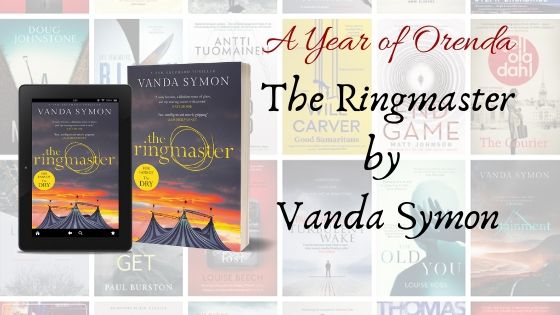 Today it’s back to Mandie who has a review of Vanda Symon’s The Ringmaster, book two in the Sam Shephard series and another one of her #50for50 #YearofOrenda challenge. I shared my thoughts last year which you can read right here. Before we find out what Mandie thinks, let’s take a look at what book is all about:

Death is stalking the South Island of New Zealand

Marginalised by previous antics, Sam Shephard, is on the bottom rung of detective training in Dunedin, and her boss makes sure she knows it. She gets involved in her first homicide investigation, when a university student is murdered in the Botanic Gardens, and Sam soon discovers this is not an isolated incident. There is a chilling prospect of a predator loose in Dunedin, and a very strong possibility that the deaths are linked to a visiting circus…

Determined to find out who’s running the show, and to prove herself, Sam throws herself into an investigation that can have only one ending…

Rich with atmosphere, humour and a dark, shocking plot, The Ringmaster marks the return of passionate, headstrong police officer, Sam Shephard, in the next instalment of Vanda Symon’s bestselling series.

After thoroughly enjoying the first in the Sam Shephard series, I was pleased that I could jump straight into The Ringmaster to see what Vanda had in store for the feisty NZ copper. After previous events in Mataura, Sam has now moved to Dunedin and has been fast tracked to Detective Constable. Despite it being what she had hoped for, the move has brought its own set of issues… from colleagues who think she must have done something to get the gig to her now coming under the command of the one DI she managed to right royally piss off the last time their paths had crossed.

When she becomes the first detective on scene when the body of a college student is discovered, Sam thinks finally she may get the opportunity to show others what she can do instead of being given all the crappy tasks that DI Johns takes great pleasure in assigning to her. Instead she finds herself as liaison between the police and the travelling circus that has recently taken up residence in Dunedin. Little does she realise how this simple task is going to affect her.

Sam is back at her sassy best along with her best friend Maggie. This time she has a couple of allies in the form of her partner Smithy and sparring partner Paul Frost. The sparks between them give some of the lighter moments in the book and she has certainly met her match in him. She still can’t help but let her feelings be known even if it does put her further into the firing line of her boss, but it is also what makes her a good officer. To add to her problems her parents are in town and to say that her relationship with her mother is a little fractious is an understatement, and she seems to have acquired a stalker.

What I will say is that this book will challenge your beliefs and highlight how peoples preconceived ideas can often be wrong. Even Sam is proved wrong to an extent when investigations look like the circus folk may be involved. The scenes with the circus were also the cause of the biggest titty lip I have had in a long time and even now am not sure I am over the shock of it.

Once again Vanda Symon has given the great mix of humour, and tension whilst throwing in the moral dilemmas without being preachy about them. The ending was not quite what I expected but that is what makes it so good. This was another fabulous totally engrossing read and yes I was back to craving Toffee Pops.

Vanda Symon is a crime writer, TV presenter and radio host from Dunedin, New Zealand, and the chair of the Otago Southland branch of the New Zealand Society of Authors. The Sam Shephard series has climbed to number one on the New Zealand bestseller list, and also been shortlisted for the Ngaio Marsh Award for best crime novel. She currently lives in Dunedin, with her husband and two sons.

Books in The Sam Shephard Series

Busy reading week this week. I am a very lucky blogger to have access to such fine titles.
Definitely looking forward to this one by @sharonjbolton - #ThePact - out May 27th. Available to preorder now.
Today I’m sharing my thoughts on The Cut by Chris Brookmyre.
Happy publication day to @markhillwriter as The Woman In The Wood is out today.
Today I shared my thoughts on Two Wrongs, the latest novel by @mcgrathmelj
@mandie163.mg shares her thoughts on Blue Night by Simone Buchholz.