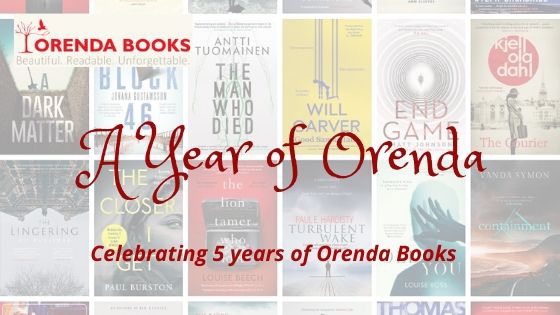 Over the past few weeks I’ve been sharing my memories of Orenda Roadshow’s past, and now it’s time to tell you about the authors appearing at Orenda Roadshows yet to come. Over the course of this week I’ll be spotlighting all of the fabulous talent you can find if you turn up to one of the five events happening around the country from 24th – 28th February. Check out the other authors in parts one, two, three or four.

If you are looking for diversity in your reading, your couldn’t ask for two more individual writers than my next two featured authors. One is a master of the atmospheric and emotional standalone, the other has created a very unique, very special series that has a legion of fans. If you want to find out more about Michael J Malone and Matt. Wesolowski then read on. If you want to hear from their books, come and join me at one of the roadshows where they’ll be talking about their latest masterpieces, In The Absence of Miracles and Beast.

For those who don’t yet know what an Orenda Roadshow is – and if not why not? – it is your opportunity to meet and greet and listen to one of the largest collections of authors outside of a traditional book festival. Featuring a wealth of Orenda Books finest authors, all of whose books I can heartily recommend, the roadshow has something for everyone. If you are a big fan of any of the authors, or the publisher, even if you are just interested in trying out new books from a highly diverse range of writers (there are people here from as far away as Norway, Finland, Germany, France and New Zealand as well as the UK) then this is the place you want to be. So let’s find about a bit more about the authors …

Michael Malone is a prize-winning poet and author who was born and brought up in the heart of Burns’ country. He has published over 200 poems in literary magazines throughout the UK, including New Writing Scotland, Poetry Scotland and Markings. Blood Tears, his bestselling debut novel won the Pitlochry Prize from the Scottish Association of Writers. Other published work includes: Carnegie’s Call; A Taste for Malice; The Guillotine Choice; Beyond the Rage; The Bad Samaritan and Dog Fight. His psychological thriller, A Suitable Lie, was a number-one bestseller, and the critically acclaimed House of Spines and After He Died soon followed suit. A former Regional Sales Manager (Faber & Faber) he has also worked as an IFA and a bookseller. Michael lives in Ayr.

Matt Wesolowski is an author from Newcastle-Upon-Tyne in the UK. He is an English tutor for young people in care. Matt started his writing career in horror, and his short horror fiction has been published in numerous UK- an US-based anthologies such as Midnight Movie Creature, Selfies from the End of the World, Cold Iron and many more. His novella, The Black Land, a horror set on the Northumberland coast, was published in 2013. Matt was a winner of the Pitch Perfect competition at Bloody Scotland Crime Writing Festival in 2015. His debut thriller, Six Stories, was an Amazon bestseller in the USA, Canada, the UK and Australia, and a WHSmith Fresh Talent pick, and film rights were sold to a major Hollywood studio. A prequel, Hydra, was published in 2018 and became an international bestseller. Changeling, book three in the series, was published in 2019 and was longlisted for the Theakston’s Old Peculier Crime Novel of the Year and shortlisted for Capital Crime’s Amazon Publishing Reader Awards in two categories: Best Thriller and Best Independent Voice.

If you want to catch up with either of the authors and grab yourself a signed book (or two) including the chance to bag their latest titles, In The Absence of Miracles and Beast, tickets are already on sale for the events, so head on over to the websites and grab them while you still can.

I hope to see you at one of the events. Fingers crossed!

Have a brilliantly bookish day everyone.

Is this diet food? #gloucesterservices #farmshop #brownieheaven #noididnt
The Orenda Roadshow day four - The Bookcase, Lowdham at Southwell Library. Another fabulous night with lots of lovely books being bought. @orendabooks #orendaroadshow #yearoforenda
The ‘river’ Avon. Apparently. Looks more like Lake Ontario ...
Today on jenmedsbookreviews.com I’m resharing my thoughts on #DeepDirtyTruth by @crimethrillergirl in readiness for the release of the fourth #lorianderson novel, #DeepDarkNight next month. I love Lori and this book sees her in deep jeopardy, on the hook with the Miami mob as she fights to save her own life. Full of action and tension, fans of the kick ass heroine will love it. A price on her head. A secret worth dying for. 48 hours to expose the truth… Single-mother bounty-hunter Lori Anderson finally has her family back together, but her new-found happiness is shattered when she’s snatched by the Miami Mob – and they want her dead. Rather than a bullet, they offer her a job: find the Mob’s ‘numbers man’ who’s in protective custody after being forced to turn federal witness against them. If Lori succeeds, they’ll wipe the slate clean and the price on her head – and those of her family – will be removed. If she fails, they die. With North due in court in 48 hours, Lori sets off across Florida, racing against the clock to find him and save her family. Only in this race the prize is more deadly – and the secret she shares with JT more dangerous – than she ever could have imagined. In this race only the winner gets out alive… #booklove #lovebooks #books #bookstagram #bookstagrammer #booksblogger #bookblog #bookblogging #bookbloggers #booknerd #bookworm #booksofinstagram #booksofinsta #bookbloggersofinstagram #booklover @orendabooks #yearoforenda
Head over to jenmedsbookreviews.com and you’ll find my thoughts on #BetonRouge, the brilliant second Chastity Riley book by #SimoneBuchholz. This one has a slightly different styling to Blue Night, but still has the same sassy hard drinking prosecutor we all love, this time in the road with her new Investigative partner Ivo. I love Ivo. On a warm September morning, an unconscious man is found in a cage at the entrance to the offices of one of Germany’s biggest magazines. He’s soon identified as a manager of the company, and he’s been tortured. Three days later, another manager appears in a similar way. Chastity Riley and her new colleague Ivo Stepanovic are tasked with uncovering the truth behind the attacks, an investigation that goes far beyond the revenge they first suspect … to the dubious past shared by both victims. Travelling to the south of Germany, they step into the hothouse world of boarding schools, where secrets are currency, and monsters are bred … monsters who will stop at nothing to protect themselves. A smart, dark, probing thriller, full of all the hard-boiled poetry and acerbic wit of the very best noir, Beton Rouge is both a classic whodunit and a scintillating expose of society, by one of the most exciting names in crime fiction. #booklove @orendabooks #lovebooks #books #bookstagram #bookstagrammer #bookblogger #bookblog #bookblogging #bookbloggers #booknerd #bookworm #booksofinstagram #booksofinsta #bookbloggersofinstagram #yearoforenda
Had to drive through #wentshirewitch #changeling territory tonight to get home from the #orendaroadshow . No sighting this time around ...